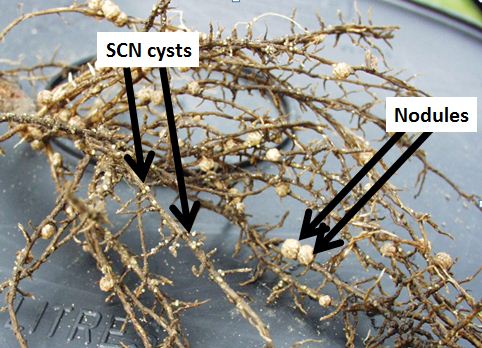 SCN is now present in 22 counties (Figure 1), including the province’s key dry bean producing regions. Recent surveys in southwestern Ontario found 80% of the fields tested were positive for SCN. Unfortunately, SCN will continue to move across the province into previously non-infested fields and counties.

SCN can reproduce on all types of dry beans and may negatively impact yield. Dry bean susceptibility to SCN depends on the market class and may also depend on the variety. While local research conducted to date is limited, we know that:

Researchers in North Dakota have conducted several studies on SCN in dry beans which agree with the statements above, although the specific varieties studied are often different than those commonly grown in Ontario. Recent reports from the US have stated that SCN is “a major yield limiting threat to dry beans in Minnesota and North Dakota”, and the same is true in Ontario. Local studies on SCN in dry beans have included commonly grown varieties in each of the market classes mentioned above, but extensive research on susceptibility by class or variety has not been conducted. Within the available data, cyst scores for each variety are quite variable from one year to the next and across different trials. The available data does not include yield results.

There are currently no SCN resistant dry bean varieties available, although US researchers have begun breeding for resistance. There are also no foliar or seed treatment products registered in dry beans for SCN management. Chris Gillard, University of Guelph – Ridgetown Campus, has begun evaluating the effectiveness of nematicide seed treatment products on dry beans; the products are registered in soybeans. VOTiVO, ILeVO and Clariva have been tested in controlled environment growth cabinet studies but results have been mixed. Only ILeVO has provided some consistent results in reducing cyst numbers on roots.  While the products may have value in dry beans, the growth cabinet trials were not taken to yield and at this time it is unclear if the level of cyst reduction will be meaningful in a field scenario. Attempts at studying the products in naturally SCN-infested Ontario fields produced highly variable results.

SCN symptoms in dry beans will be similar to symptoms in soybeans. Stunting, poor canopy closure, and chlorosis may be evident. Plants may have fewer pods or mature early, and damage may show up earlier in sandy areas. Often there are no above ground symptoms at all. Check plant roots 30 to 45 days after emergence by gently digging up plants, rather than pulling them out. Look for pearl white to yellow cysts that are much smaller than root nodules.

Ontario dry bean growers should manage their risk by testing their fields for SCN. Plan on taking soil samples this fall, shortly before or after bean harvest. Use a soil probe to take samples at a depth of 6-8 inches. Sample directly in the row, before tillage is conducted. The first time a field is checked for SCN, sample areas where SCN is likely to establish first including near the field entrance, along fence lines, areas that have been flooded, and areas of high soil pH (greater than 7).