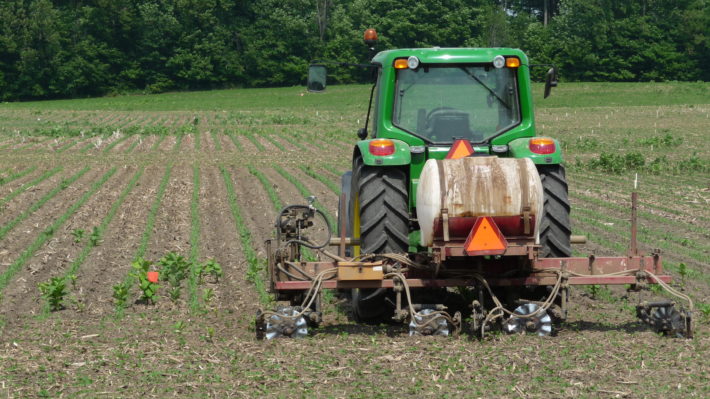 OMAFRA Field Crop Unit staff have traditionally conducted an annual Pre Sidedress Nitrogen Test (PSNT) survey across Ontario at the beginning of June to measure background soil nitrate levels mineralized from the soil as an indication of year-to-year soil nitrogen status. In past years, 80-100 samples would be collected from corn fields across the province that had not yet received nitrogen.

From 2015-2018, OMAFRA transitioned to reporting the results of a Grain Farmers of Ontario (GFO) supported Soil Nitrogen Sentinel project. The goal of the project was to collect samples over time from several permanent locations to better understand how natural soil nitrate levels change over the spring. Soil organic N mineralizes over time in the spring at different rates due to factors such as temperature, moisture, soil texture and crop rotation.

With the end of the N-Sentinel project, the soil nitrate survey has resumed to its previous survey format. Soil samples are collected when fields have generally reached the V3-V4 stage, just prior to traditional sidedress time.

Nitrogen mineralization is favoured by warm soil conditions with adequate soil moisture and aeration. Excess moisture, especially under warm temperatures, can increase the potential for losses through leaching or denitrification. The spring of 2019 arrived slowly and through to mid June below average temperatures and persistent rainfall dominated large parts of the province. By June 15, many areas of Ontario were 50-150 Crop Heat Units below the 30-year normal.

A total of 66 fields were sampled across the province, representing a range of previous crops, soil textures and geographies of Ontario. Samples were collected from June 17-19 for a V3-V4 stage target sampling. This is about 2 weeks later than the survey is usually conducted, however, due to delayed planting in many parts of the province, it was consistent with the corn growth stage the survey attempts to target each year. Due to variability in rainfall and planting dates however, there was still a wide range in crop stage ranging from not emerged to V4. In cases where corn fields without preplant N could not be found, soybean fields were sampled if conditions were representative of field corn (wheat or soybean previous crops).

This suggests 2019 may not be a year to pull back on nitrogen rates, especially if you feel nitrogen rates on your farm are typically quite close to optimum. In some years when PSNT values are low we would suggest considering increasing nitrogen rates a little bit, but optimum nitrogen rates are a function of both natural soil nitrogen supply to the crop and yield expectation driven demand. In a year like 2019 where a large amount of crop has been planted later than normal and possibly into sub-optimal conditions, yield expectations should also be lower. This will reduce nitrogen demand, which may offset the reduction in natural soil N supply. If you still expect average to above average yields on your farm in 2019, and nitrates are lower than normal, perhaps you should still consider applying slightly more N.

At the very least, this makes it a good test year to apply some test strips applying 30 lb-N/ac above or below your normal nitrogen rates to get a feel for how your corn crop responds to N on your farm in a low nitrate year, and to provide some guidance for nitrogen decisions in future years like this.

Application To Your Fields

The values in this report are a crude relative indication only and should not be used as a recommendation for nitrogen rates on any given farm. Soil nitrate values are highly influenced by the environment (agronomic practices, local weather). For instance, if you are in an area that has received significantly more rainfall than other parts of the province, you may have experienced less mineralization or more loss than is reflected in these results. The only way to know soil nitrate concentrations on your own farm is to pull soil samples for nitrate analysis from your own fields.

To collect PSNT samples, collect several 12″ soil samples across a field using a soil probe. Sample parts of fields separately if there is reason to suspect differences in N content (past history, soil type, topography etc.). Make a well-mixed representative sub sample of approximately 1 lb to fill a lab box or bag. Samples should be chilled to prevent further mineralization and sent to a lab as soon as possible.

OMAFRA PSNT recommendations are only calibrated against natural background soil organic nitrogen mineralization and should not be used where nitrogen fertilizer has already been applied. A modest amount of N applied with banded or in furrow starter (ie. 30 lb-N/ac) is OK provided sampling can be done mid-row to avoid these bands. Due to differences in N mineralization timing, nitrogen recommendations in corn fields with manure, red clover or alfalfa in the previous year are more accurate when using nitrogen credits from Pub 811, Agronomy Guide for Field Crops.

OMAFRA revised PSNT recommendations in 2015 to include both soil nitrate measurement and expected yield (Table 1).

Sincere thanks to the growers, agronomists and OMAFRA staff who assisted in identifying, providing ans sampling various locations for nitrate sampling, and to Grain Farmers of Ontario and SGS Agri-Food Laboratories Guelph for financial support of the annual PSNT survey. 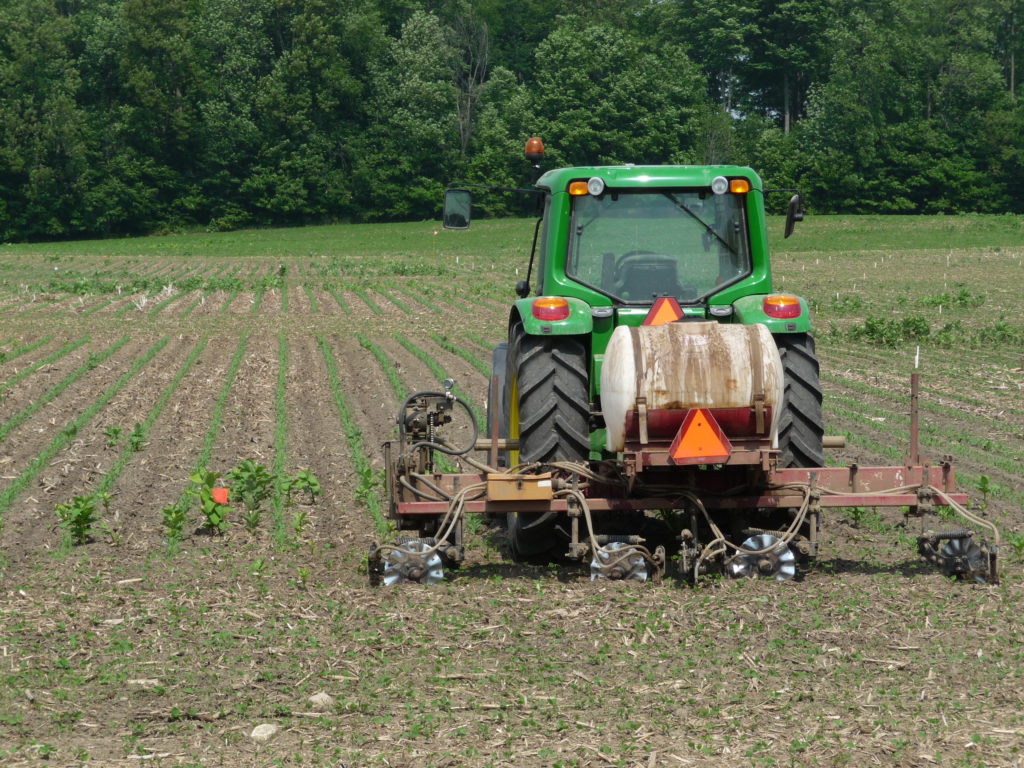