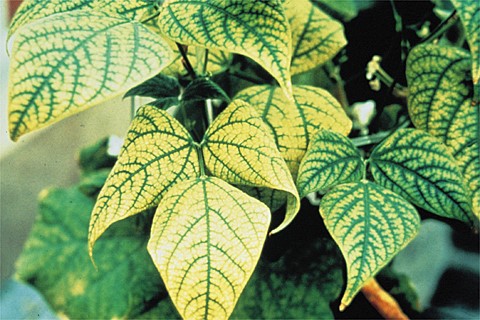 Knowing how to identify deficiencies enables you to take corrective action, immediately, if possible, or in the following season. At this year’s Southwest and Eastern Crop Diagnostic Days, my horticulture counterpart, Christoph Kessel, and I presented on how to diagnose crop nutrient deficiencies.

As we shared, there are two key observations that you must make: first, what type of symptom are you seeing, and second, where on the plant are you seeing it?

Chlorosis is yellow or pale green tissue. It indicates that chlorophyll production is being negatively affected. Chlorosis can occur over the whole leaf or it can affect the leaves while the veins remain green – this is called interveinal chlorosis (Figure 2). Chlorosis is associated with deficiencies of nutrients that play important roles in chlorophyll production, such as nitrogen, magnesium, sulphur and iron.

Necrosis, or tissue death, can occur as the deficiency becomes more severe – think of lower corn leaves “firing up” and dying (Figure 3). Necrosis is often the result of nitrogen, potassium or magnesium deficiency.

Certain deficiencies cause abnormal growth. In these cases, the lacking nutrient plays a crucial role in cell replication and elongation. An example is boron deficiency in sugar beets, which causes crinkled and deformed leaves.

Next, where you see symptoms on the plant matters. Nutrients that are mobile within the plant will show up on the older, lower leaves.

These include nitrogen, phosphorus, potassium and magnesium. Immobile nutrients that cannot easily be moved within the plant show deficiency symptoms mainly on the newer, upper leaves. These include boron, sulfur and manganese, to name a few. Finally, there are several nutrients that have intermediate plant mobility and can show up as deficiencies on younger and older growth. Zinc deficiency in corn is an example of this.

There are characteristic deficiency symptoms for certain nutrients. For example, nitrogen and potassium deficiency both cause chlorosis on the lower leaves of corn, but potassium affects the leaf margins, while a lack of nitrogen causes a V-shaped yellowing from leaf tip to midrib.

Symptoms may also show up uniquely on specific crops. Manganese deficiency shows up as interveinal chlorosis in soybeans but causes grey tissue in cereals. Potassium deficiency causes white or yellow spots along leaf margins in alfalfa and clover, instead of the straight yellowing of leaf margins seen in corn and soybeans (Figure 4).

Keep in mind that what looks like a nutrient deficiency may not always be caused by a lack of available nutrients. For example, soybean cyst nematode damage can cause potassium deficiency symptoms due to root damage, even when enough potassium is available in the soil. Phosphorus deficiency can also be the result of poor planting conditions and restricted early season root growth. Certain diseases and insect pests may also cause damage that resembles nutrient deficiencies – be sure to consider all possibilities.

OMAFRA has a key that you can use to help identify nutrient deficiencies based on unique symptoms and where they present themselves on the plant. Find it under the Soil Fertility page of our Field Crop News website. If you see plants that don’t look quite right in your fields, take a closer look and see if a nutrient deficiency might be the cause.