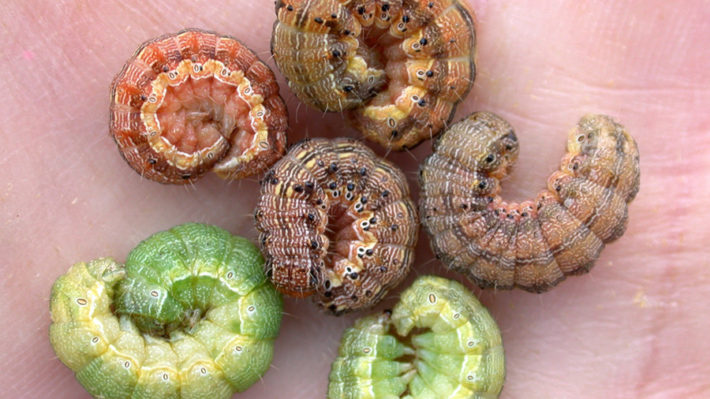 It is August when this article is being written so we do not know what potential impact corn earworm (CEW) could have on our grain corn crop until harvest. Corn earworm was found in several fields in Ontario and Eastern Canada in late summer of 2018 and in 2019. They arrived in Ontario in June which is much earlier than usual and could be a sign of things to come. Corn earworm historically overwinters in the southern US and migrates as moths to Ontario via storm fronts. We usually don’t see moths here until late July or early August. They can on occasion overwinter as far north as the 40th parallel, depending on how mild the winter is. Field research has not been done recently to confirm just how far north CEW are overwintering and emerging. Models indicate that as climate change results in frequent milder winters further north, their overwintering area could expand to the Great Lakes region (Figure 1). What could also contribute to later season infestations in Eastern Canada is that corn earworm also migrate in the fall back to their southern overwintering areas. The last generation to leave locations north and east of here could land back into Ontario in the fall, on route to their more southern destinations.

Corn earworm (Helicoverpa zea) has over 100 plant hosts and therefore has many common names, including tomato fruitworm and American cotton bollworm. It feeds on all corn types but especially sweet corn, as well as sorghum, cotton, tomatoes, peppers, most bean types including green, snap, dry beans and soybeans, alfalfa and many others. They prefer to feed on the fruit or reproductive part of the plant. In corn, they feed on the silks of the ear and kernels. In beans, they mine into the pods and feed on the seeds inside.

Adult moths are sandy, tan or reddish brown in colour with a central brown dot on the forewing and lighter coloured hind wings with dark brown borders (Figure 2). Female moths lay single eggs, in the case of corn, on individual sink hairs, making them very difficult to see. The larvae vary greatly in colour from light green, yellow, pink, brown to almost black. All have a light orange head and older larvae have prominent stripes along their body. All CEW larvae have dark tubercles (warts) running the length of the body with coarse hairs sticking out of some of the “warts” (Figure 3). It is easier to tell if you have corn earworm because of the variation in colour. If there is a green larva in one plant but a brown one or pink one in the next plant, all of which have warts and hairs sticking out of them, then it is likely CEW.

Thresholds and management vary depending on the crop. In Ontario, sweet corn tends to be its first choice, but that might be changing. If moths continue to arrive earlier, other crops can be more attractive early on. Moths prefer to lay eggs in corn fields during tasseling where there are fresh silks to place their eggs on. Their earlier arrival this year made tomatoes the first crop to go to in June. With field corn planting so delayed, moths were equally attracted to sweet and field corn that were tasseling at the same time. Last year, we found larvae in late August, early September in grain corn which means they were likely still laying eggs after silks were brown in these fields. We may also see them in the dry bean crop this year.

So why be concerned about corn earworm? There are a few important reasons:

1) It is difficult to scout for unless you use traps to monitor for their presence. The eggs are impossible to see so they can go unnoticed until the larvae are feeding.

2) Spray timing could be difficult, especially in crops where only one application is economical. High value crops like sweet corn have weekly spray programs to keep CEW out. Timing is so important because they are difficult to control once they are inside the fruit of the plant.

Most important and concerning is 3) Resistance. This pest arrives here from the southern US where there are multiple generations each year. They are known to be resistant to foliar pyrethroid insecticides and because they feed on both cotton and corn, they have developed resistance to almost all of the Bt traits that could control them. There is field evolved resistance to Cry1Ab (event Bt11) and Cry1A.105+Cry2Ab2 (event MON89034) in the US. And there are indications of potential resistance developing to Vip3A which is now heavily used in both cotton and corn in the southern US. These resistant populations are what migrate to Eastern Canada. There have been a number of field calls in Ontario with corn earworm larvae found in SmartStax corn (Cry1A.105+Cry2Ab2). So currently Vip3A is the only trait to provide protection in Ontario, though we don’t know how long control by that trait will last. As resistant population become more common and control is less effective, corn earworm populations could be more prevalent in many of its host crops.

There are a few key things we need to start doing in Ontario to keep this pest at bay. Plant host crops as early as possible to be less attractive to the moths when they do arrive. Use pheromone traps to monitor populations so we know when moths arrive and are active in the area. Scout for signs of early feeding and young larvae when control may still be viable. And rotate chemistries used against them. Pyrethroids are no longer an option but using products from other chemical families and rotating between chemical families for each application reduces resistance. If you plant Vip3A corn and find CEW in the ears, notify your seed agronomist and myself so that we can confirm if resistance has occurred and what measures to take next to mitigate the issue. 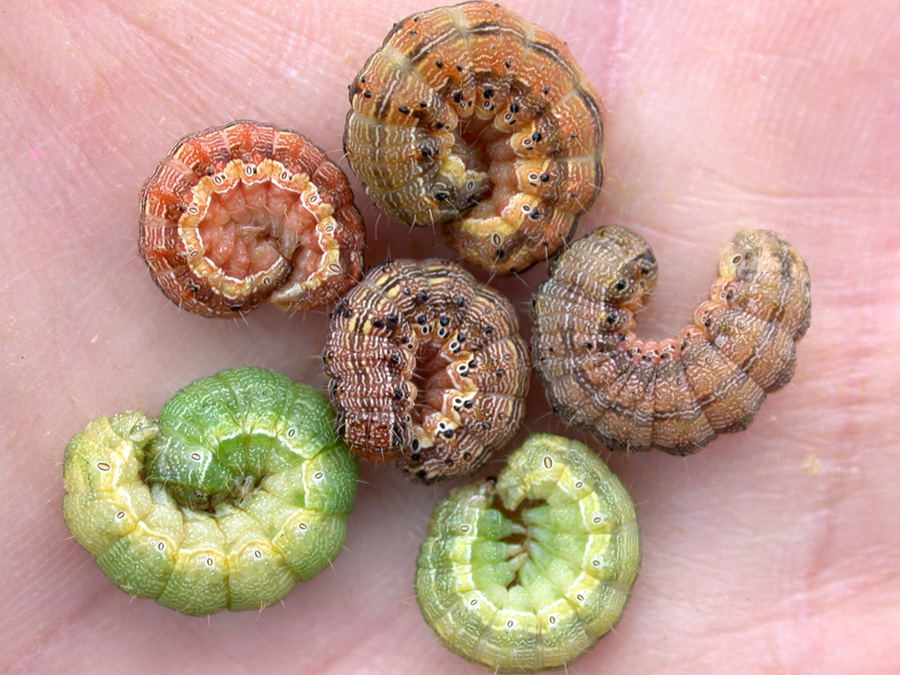