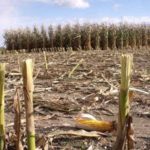 Late planting dates, low Crop Heat Unit (CHU) accumulations, and early frost may result in situations where corn is killed by frost before it reaches the normal stage of maturity and moisture for silage. Some fields planted for grain may not mature adequately for optimum yield, moisture and quality. Farmers may be looking at salvaging these crops by harvesting or selling some of those fields for silage.  The key to making the most of frost-damaged corn silage is to harvest it at the correct moisture.

Slightly immature, frost damaged corn that has dented can make good silage. Energy is partitioned differently in immature silage than in normal corn silage. Immature corn has lower levels of kernel starch, but there are higher levels of sugars that have not yet been translocated from the stalk. Kernel texture will be softer and starch more digestible than it would be with unprocessed, mature plants. With immature corn silage, the fibre content will be higher, but it will be less lignified and more digestible than in more mature silage. In general, slightly immature corn silage will have slightly higher fibre and crude protein levels and slightly lower energy levels than normal corn silage.

For high quality silage, corn should be past the “late-dough” or “early-dent” stage of development. Very immature corn at the milk or early-dough stages will have lower starch and higher fibre. Research shows that corn silage at the “dough” stage may be 3 percentage points lower in digestibility and 8 percentage points higher in Neutral Detergent Fibre (NDF) than normal. Research indicates that harvesting silage before the late-dough or early-dent stage results in less “Milk Per Ton”. Very immature corn silage with less than ideal quality can be fed to animals with lower nutrient requirements. Storage of poorer quality silage in a separate silo, such as a bag silo, is also a consideration. Immature corn can be expected to yield less silage, so more acres will likely be required to fill the silo and meet forage requirements. Dough stage corn has about 65 to 85% of normal silage yield.

Accurate laboratory analysis of corn silage is important to successfully predict energy values and balance rations. Wet chemistry, rather than Near Infrared Spectroscopy (NIRS) analysis is recommended for frost-damaged or immature corn silage because it is so different than the NIRS calibrations. Digestible energy of corn silage is primarily determined by the relative amounts of starch and fibre (NDF) and their digestibilities. Immature corn silage has less starch but more fermentable plant sugars. In the past, ADF was used to estimate energy, and NDF was used to estimate intake, but these measures alone do not consider digestibility. Newer methods more accurately estimate corn silage digestible energy using crude protein, NDF, fibre digestibility (NDFD), starch, ash and fat. Starch digestibility can also be estimated using moisture, kernel processing scores and other laboratory starch digestibility tests.

Harvesting at the proper whole-plant moisture is critical for producing high quality corn silage. It is difficult to know when to harvest frost-damaged corn because we cannot use the “kernel milk-line” guidelines.

Harvesting frost damaged corn silage too wet is the most serious problem. Refer to “Harvesting Corn Silage At the Right Moisture” https://fieldcropnews.com/?p=7953 . At moisture greater than 70%, clostridial fermentations produce butyric acid. Butyric acid results in high fermentation losses and gives the silage a “fishy”, rancid odour.  Silage containing butyric acid results in lower intake, ketosis and poor cow performance. A fermentation analysis can be used as a diagnostic tool when there are suspected fermentation and feeding issues. Refer to “Silage Fermentation Problems” https://fieldcropnews.com/?p=5592 . Seepage results in a loss of highly digestible nutrients and is harmful to the environment. Very wet, frozen silage can be difficult to unload in the winter.

Dry Down After Frost

Although dead, frosted leaves give the appearance of rapid dry down, most of the moisture is still in the stalk and grain. Frosted corn often appears to be drier than it really is, and harvesting at a moisture level that is too high is a common mistake.

Immature, frozen corn often does not dry down significantly faster than unfrozen corn (typically about 0.5% per day), and may require many days of drying to reach the correct moisture content. When this is happening, dead plants will drop leaves and sugars leach from frosted leaves. Yield losses and moulds will increase with time. However, producers need to balance these losses against fermentation and butyric acid problems associated with silage that is too wet. What typically occurs is that a few days following a killing frost, everyone wants to harvest at the same time.

If you are in doubt about the whole-plant moisture, chop a sample to determine percent dry matter. Watch for moisture variability within fields. Keep in mind that Koster Testers and microwaves tend to under-estimate moistures by about 3% because it is so difficult to remove the residual.  A 68% moisture sample reading is actually about 71%. In a typical year, that 3% is equivalent to almost a week in harvest time. If using a Koster Tester or microwave, taking the time to carefully dry the sample is important. The finer the sample is chopped, the easier it will be to dry, and the more accurate the result. A more accurate alternative is to courier a sample overnight to a forage laboratory for a moisture determined by oven drying.

Use A Corn Silage Inoculant

Frost may kill some of the naturally occurring silage fermentation bacteria found on the corn plants. Using a research proven corn silage inoculant after a killing frost should ensure an efficient bacterial fermentation. Refer to “Silage Inoculants”  https://fieldcropnews.com/?p=7159 .

After a frost, if the leaf material is dead but stalks and roots are alive, nitrates can accumulate in the lower stalk. This increases the risks of nitrate toxicity and silo gas. Increasing cutting height by 30 cm (12 inches) will increase quality slightly because the lower stalk has the lowest digestibility and the highest nitrate levels, but it can also reduce yield by about 15% . Increasing the cutting height can lower the  moisture of the silage by about 3%. Do not add non-protein nitrogen (NPN) to very immature corn silage, as seepage will concentrate NPN in the lower portion of the silo. Refer to “Potential Nitrate Poisoning & Silo Gas In Corn Silage” https://fieldcropnews.com/?p=4976.