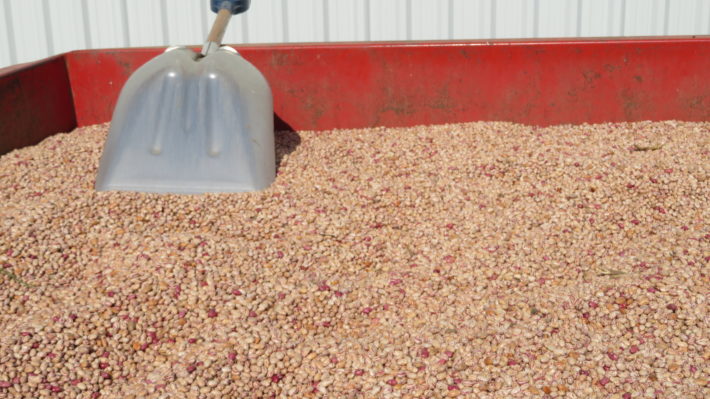 In 2015 an Oxford County farm family, the Vollmershausen’s, were looking around for a yield monitor for their Pickett combine. The Vollmershausen’s grow kidney and cranberry beans which are harvested by pulling and windrowing, then picked up and threshed by a Pickett combine. Large seeded dry beans are somewhat delicate and must be handled gently so that the final product is visually appealing and free from split and cracked beans. For this reason, bean combines such as the Pickett have bucket elevators to move beans into the bin, and the bin is unloaded by dumping rather than using an auger.

Most direct-harvest combines, like those used for corn and soybeans, have a mass flow yield monitor. These use a load cell to convert the force applied by grain striking an impact plate into an electrical signal. The amplitude of that signal is used to estimate grain mass or yield through calibration specific to the equipment and the grain type. With mass flow yield monitors the grain strikes the impact plate with a force significant enough to crack large, delicate beans like kidney or cranberry beans (see video here), which is why they are not used.

This is old news for Ontario’s dry bean producers. What’s new is that when the Vollmershausen’s made inquiries about a yield monitor for their Pickett combine, an Ontario company created one. Greentronics, founded in 1994 and located in Elmira, design and manufacture electronic control products for use in agriculture. Bill Menkveld works in sales and his brother Bert is the technical guy who designs and creates new technology. With the use of the Vollmershausen’s equipment as well as drawings of the combine sourced from Pickett, Greentronics created a prototype load cell yield monitor. Three of these yield monitors have now been installed on Pickett combines – one in Manitoba and two in Ontario.

The Menkveld’s decided they could measure torque on the hydraulic motor that drives the elevator leg of the Pickett combine. A load cell installed on the motor measures the force or strain on that component, which has a linear relationship with the weight of beans moving in the elevator. The technology is not new, it is just being applied in a slightly different way. The Vollmershausens actually have a Twin Master Pickett combine, so the hydraulic motor on the bucket elevator also drives a cross auger for the second elevator and drives a straw walker shaft that distributes plant material inside the machine. The Menkveld’s wondered if varying levels of plant material moving across the straw walker would impact how hard the motor is working, throwing off the yield measurements, but so far they are seeing a good linear relationship and this simple design is working well.

The yield monitor data can be viewed on a Trimble or John Deere display, and maps and statistics can be viewed in real time during harvest. With a John Deere 2630 display (a.k.a. Gen 3 display) it is possible to wirelessly upload the data to your office through the John Deere Operation Center, and data can be overlaid with other information to look for relationships. The yield monitor also collects data on its own memory and tracks additional details that are not viewed on the Operation Center, such as changes to calibration or details on performance of the device. This allows users to see how it is working, or for Greentronics to adjust how the device is performing. The Menkveld’s plan to collect some data off the existing yield monitors and ensure they are performing at their best.

The two yield monitors installed on combines in Ontario are being used in a research project funded by Ontario Bean Growers and the Canadian Agricultural Partnership. The project objectives include demonstrating the use of this new yield monitor in cranberry beans and measuring yield response to various seeding rates towards improved recommendations for variable rate seeding of dry beans. The three-year project is being conducted on 3 white bean fields and 3 cranberry bean fields and utilizes the Enhanced Learning Block System developed by Premier Cropping Systems. It is a farmer-led project with significant support from Greg Kitching at Premier Equipment. The yield monitors are critical in terms of collecting data on the response of cranberry beans to seeding rates ranging from 40,000 to 82,500 seeds/ac across 100 acre fields. The project is entering its second field season, and results will be available through Ontario Bean Growers events and newsletters.

Greentronics have been developing similar technology for other types of combines. They have installed monitors on veggie harvesters, where yield data is collected by a load cell on the support rollers of conveyors within potato harvesters, for example. Bill Menkveld credits Tyler Vollmershausen for being an innovative thinker and prompting them to develop the dry bean yield monitor. The Vollmershausen’s had the first prototype installed on their combine on a spring day and worked with the Menkvelds to test its performance with buckets of grain in their yard. Bill seems quite pleased that the development is farmer-driven, and Tyler is keen to support this made-in-Ontario technology. Having yield maps for high value, large seeded beans offers a significant advancement in a producers’ opportunity to confidently refine their best management practices. 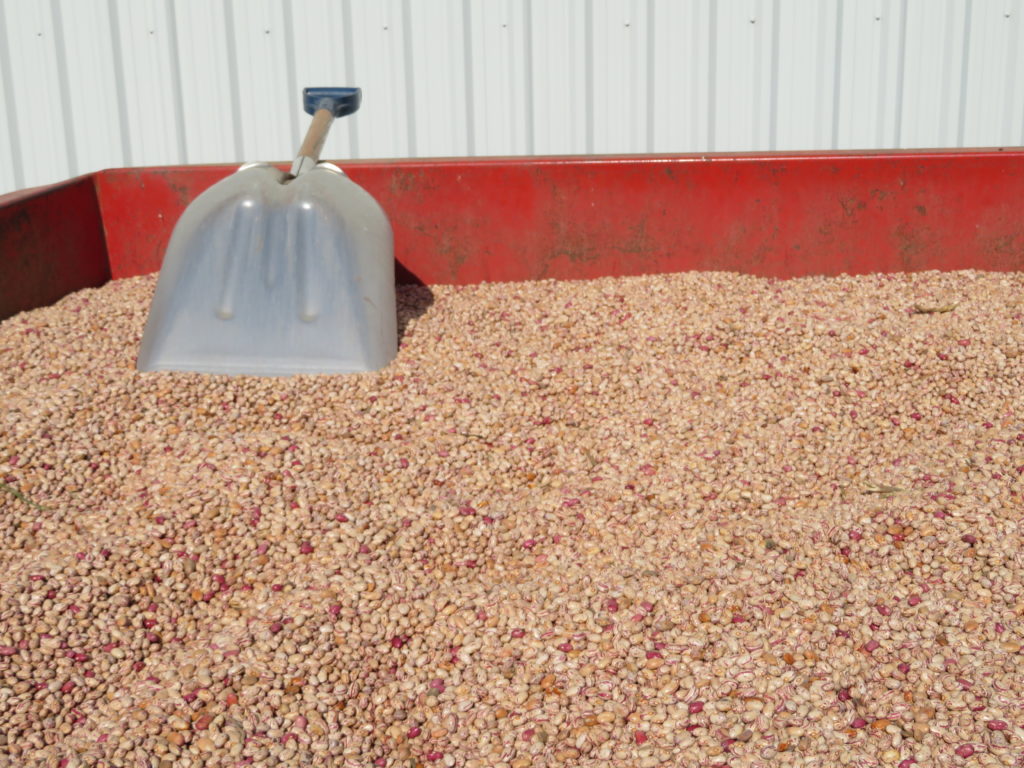