(This article updated on March 5, 2019 with yield data from Agricorp. See table at end of article)

Acreage of dry beans in 2019 increased approximately 20% over 2018 acreage, with notable growth in acres of white and adzuki beans. Challenging planting conditions for corn and soybeans were likely a factor in the increased acres of dry beans in 2019. The general target for planting dry beans is June 1st or after the last frost, so rather than planting corn and soybeans late producers may have switched some acres to dry beans. Planting of adzuki, the bean that takes the longest to mature, began in earnest around June 1st. June 9th and 10th was the first decent window for many producers to plant field crops including dry beans, but a significant rainfall forecasted for June 11th was a good reason to wait longer on beans. Calendar date for planting dry beans is important for harvest timing, but a heavy rain after planting can significantly reduce rates of emergence because of crusting and is best avoided.

Dry bean emergence varied widely. Adequate moisture in many fields resulted in excellent emergence. For others, wet and cool conditions, often below 20° C, resulted in very slow emergence and poor stands. Despite this some producers opted to keep fields with low populations because of the late planting date. Replanting in early July often leads to late harvest in wet conditions, resulting in poor quality beans.

It was relatively cool and dry during summer which generally results in good dry bean yields; too much rain or heat is often more stressful for dry beans. Most regions had timely rains during pod fill, however some areas had a very wet start then became overly dry during summer resulting in a stressed crop. Unfortunately, some producers also had hail in early October that caused significant damage to dry bean fields.

Reports of root rot during early plant growth stages were common. Lack of rainfall in the early flowering stages made producers question whether to apply fungicides to prevent white mould. The risk of white mould was low during early flowering, but there was more rain towards the end of flowering resulting in some late-onset white mould. Overall, fungicide use on dry beans was likely lower this year. There were no reports of issues with anthracnose.

Bacterial diseases were not necessarily more abundant this year, but it is important to note that researchers are reporting an increase in incidences of bacterial brown spot (BBS). BBS symptoms look very similar to common bacterial blight (CBB). BBS has many native host plants, so purchasing seed grown in the United States (US) may not reduce the risk of BBS infection and BBS may infect varieties that carry resistance to CBB.

Insect pressure was lower this year than in 2018. Potato leafhopper occur every year to some extent, and some producers reached threshold and applied an insecticide. There were a variety of reports of caterpillars and larvae in fields this year (e.g. cloverworm), but typically at low levels.

Western bean cutworm (WBC) continues to be a challenge to monitor and manage in dry beans. Peak flight occurred during the same week as last year; at the end of July and beginning of August depending on region. However, WBC moth flight continued later in the season this year and central and eastern Ontario had higher WBC moth counts overall compared to 2018.  Insecticide application is recommended when the following factors have occurred: a total of more than 150 WBC moths are captured in traps, peak flight has occurred and trap captures have started to decline, pods are present on the plants and pod feeding damage has been observed.

At harvest time producers often find plants that remain green after application of pre-harvest herbicides (Figure 1). On further inspection they find the pods are empty or contain deformed, sprouted or hollow seeds (Figure 2). This is not necessarily regrowth; the plants remain green and growing because they have not produced viable seed and are therefore not ready to shut down. This may appear as individual plants, but many producers reported very large patches in 2018 and 2019, up to 50 acres. The affected areas do not correlate with topography or soil type across the field and it is not a symptom of lack of moisture. The field are typically described as looking very healthy all season. Viruses have not been detected. It is not clear what the cause of these green patches is. OMAFRA have collected samples and are working on collecting info on field history.

To meet the requirements of end users, dealers are no longer allowing the use of glyphosate as a pre-harvest herbicide treatment. Cloudy conditions through October made it difficult to time Eragon application when it will provide the best dry down of weeds and bean plants, which is during warm, sunny conditions prior to 5:00 PM. Good coverage with Eragon also improves efficacy, so producers should consider spraying with 25 gallons of water and applying when plants are fully mature and have dropped many of their leaves. Producers reported some difficulty harvesting through green stems.

Dry bean harvest started in mid-September with good harvesting conditions. There was another 7 to 10-day window of good weather in early October when most dry beans were harvested. Harvest was about 85% complete by mid-October. Snow fell before harvest was complete, and at the time of this report there are about 5% of dry bean acres remaining in the field. Final yield must be reported to Agricorp by December 15th, so yield data is not yet available for insured acres. Reports indicate that most dry bean classes had average to better than average yields. Dry bean dealers have stated quality is excellent, and that a large percentage of white beans were delivered with less than 4% pick. 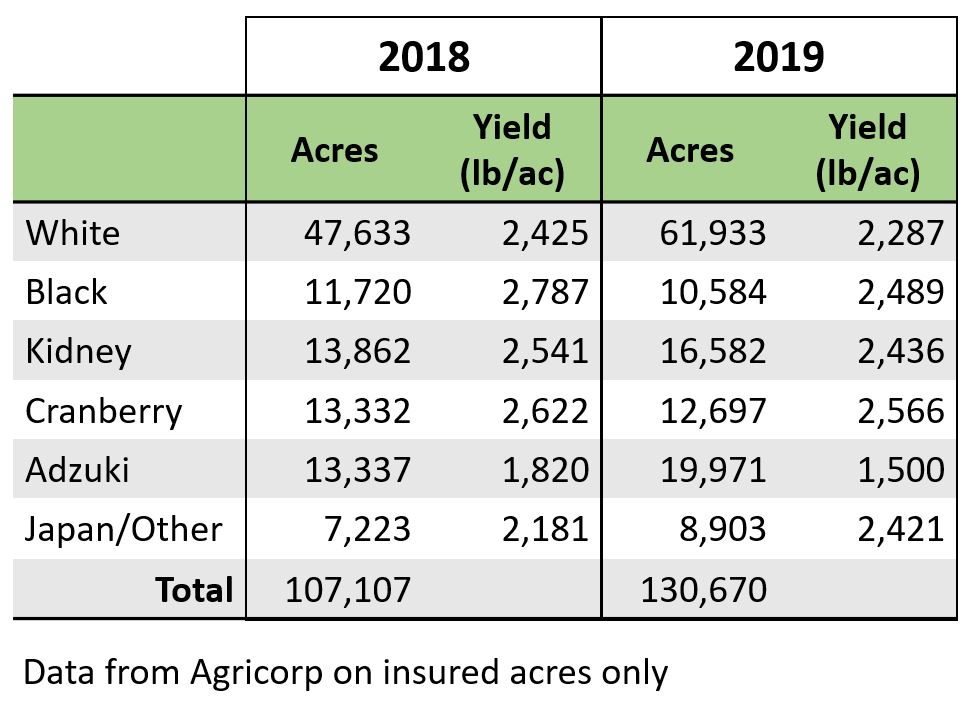