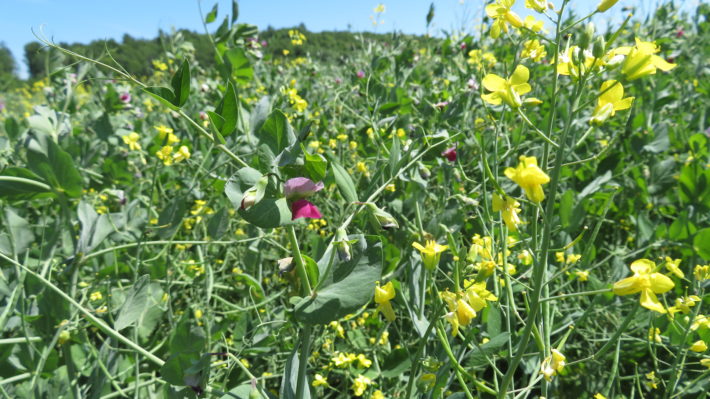 Jennifer and Mike Doelman farm near Douglas, Ontario where Mike spoke about their experience growing peaola at a recent Soil Network event. The Ontario Soil Network goal is improving Ontario’s Soils. Growing peaola is the intercropping of peas and canola together in the same field, at the same time. Figure 1 shows the Doelman’s 2019 peaola field when both crops were flowering.

Growing peas on their own can be challenging. Once the peas have matured, peas tend to lodge and lay on the ground where the stalks deteriorate quickly, leading to difficult harvesting conditions and poor grain quality. The idea of growing canola with the peas is that the “canola will hold up the peas to avoid this problem” said Mike.

There are several advantages of growing two crops together. Traditional barley and oats have been intercropped. Past research has shown that with barley-oat intercropping there is less disease, and in variable soil and/or drainage, greater yield than either crop alone. Growing canola is known to suppress the growth of mycorrhizae in the soil which can affect soil fertility, particularly phosphorus availability and nitrogen dynamics. Dr. Jeff Schoenau Professor of Soil Science at the University of Saskatchewan in Saskatoon has initiated a study to look at pea-mustard and chickpea–flax intercropping. Dr. Schoenau has just started to analyze the 2019 field season samples, but the “biggest visual has been a reduction in the disease in the chickpea when grown together with the flax”.

Most of the intercropped acres are grown in western Canada. Table 1 shows the intercrop mixtures and respective acres in 2019 insured by the Saskatchewan Crop Insurance (does not include uninsured acres grown).

There are a few things to think about before growing two crops together. First, most crops need to be separated to be marketed (obvious exception is mixed grain for feed, ie. barley and oats). Grain size needs to be different enough that a cleaner can separate out the two crops. This also requires the two crops to mature at about the same time to maintain quality. Other considerations are seed size, seeding date, seeding depth, fertility and weed control.

The Doelman’s planted the forage peas at 75 lb/ac and the canola at 3.75 lb/ac. The canola seed was BASF Invigor L233P with Lumiderm seed treatment. The canola-pea seed was no-till planted into soybean stubble. The canola was planted through the starter tank, forage peas in the other. No starter fertilizer was applied with the seed. Soil samples showed good to high soil fertility ranging between 17 to 32 ppm for Phosphorus (P), Potassium (K) over 230 ppm and the organic matter (OM) averaged 4.6% for both fields. A broadcast fertilizer of 21-0-0-24% sulphur and 0.3% boron was applied at 150 lb/ac pre-emerge. A fungicide application of Priaxor at 0.12 L/ac was applied on July 12, 2019.

The peaola was combined and stored in a flat storage, then run through a rotary screener to separate the canola from the peas. “The canola was fairly easy to remove and then shipped with other straight canola loads with no issues” said Jennifer.

After a wetter than normal spring, 2019 was a dry summer. Peas had a lodging score of 7 out of 10. “The peas were down fairly badly but canola allowed us to pick them up much easier than straight forage peas” said the Doelman’s, “It was the easiest harvested peas we had ever done”. Figure 2 shows the standability and combining of the peaola in 2019.

For the future, “separating the peas from the canola required fairly high labour but we are working to streamline the process. Good field cover is needed to manage weed control but a thick stand works for weeds. This is our 2nd year of this, (we) plan to do again!” 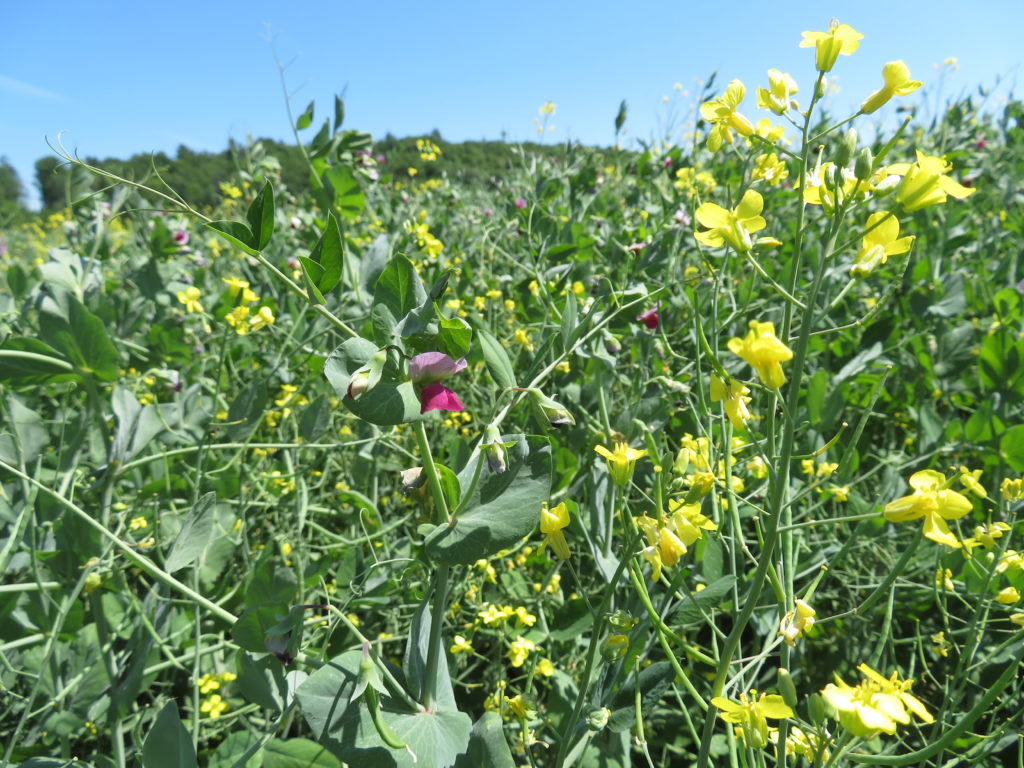