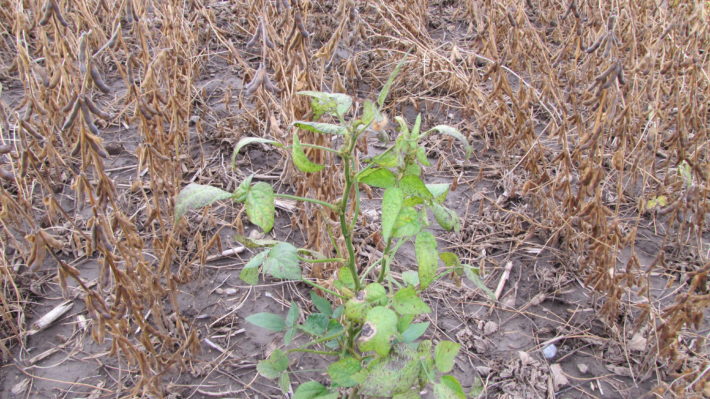 At harvest individual soybean plants that remain green may become evident. The whole plant or just the stem stays green and there are often fewer pods present on these plants. In severe cases the pods may also be small or rounded and have little or no seed. These pods are called parthenocarpic (seedless). There are a number of causes for this form of stay green including environmental stress. Low summer temperatures, herbicide drift, severe drought or in some cases a genetic mutation will cause plants to remain green. When parthenocarpic pods are present something has adversely affected normal pollen development resulting in little or no seed. Stems and even leaves stay green because the plant has produced more carbohydrates than the number of seeds on that plant demands. There are not enough pods and seeds on those plants to facilitate a normal dry down. It should be noted that this issue is likely different from “green stem syndrome”. Plants affect by green stem syndrome have a normal number of mature pods and seeds and only the stem remains green. In this case the seeds and pods are mature but the stem remains green and moist. The cause for green stem syndrome is not completely understood but large variety differences have been documented.

Low midsummer temperatures have been shown to impact pod formation in soybeans. Many cultivars cease forming pods at temperatures below 15° C. In one experiment 36 genotypes were grown indoors at day/night temperatures of 25/19° C until flowering. Plants were then subjected to 2 weeks of temperatures of 19/15, 17/15, 15/15, 15/14, and so on down to 15/7° C. Six genotypes formed no pods below 15/15° C. 18 genotypes formed pods at temperatures down to 15/9° C but only 2 cultivars formed pods at 15/7° C. Development of small, rounded pods which appeared to be parthenocarpic were noted and became a useful indicator of cold damage. Subsequent field studies showed that night-time cold temperatures during flowering also caused parthencarpic pods. (D.J. Hume and Ann K.H. Jackson. 1981. Pod Formation in Soybeans at Low Temperatures. Crop Science. Vol.21).

In a year like 2019, when there were no low midsummer night temperatures, stay green plants that have parthenocarpic pods were caused for other reasons. If the whole plant had parthenocarpic pods from top to bottom, that usually means there was a mutation in that particular plant (or in a previous generation that expressed itself this year). This genetic mutation does not allow for normal pollen development. Those plants will show up as the odd plant here and there but make up only a small percentage of the overall crop. This mutation is more prevalent in some varieties than others and often becomes evident in dry years. Since the overall percentage of these plants is quite low harvest is not usually impeded by these stay green plants and they can be ignored.

If there are specific areas in a field that remain green, that often means an environmental factor was the cause, not a genetic mutation. For example, herbicide drift or drought may have impacted normal development resulting in fewer pods per plant. Insect feeding and viral infection may also cause plants to remain green. In those cases, field edges or specific areas within a field are more impacted than others. These cases are often more serious since harvest is delayed or combine performance impacted.

Another confounding factor is that fields may not mature evenly due to low soil fertility. Sections of fields with low levels of P and K will not mature as quickly as regions in a field with good fertility. This difference in senesce in the fall is also due to a lack of pods and seeds per plant in the low fertility areas.

Although it’s impossible to control all environmental factors which impact stay green ensuring good soil fertility, controlling insects, and avoiding varieties that have caused problems in the past is the best line of defense against this issue. 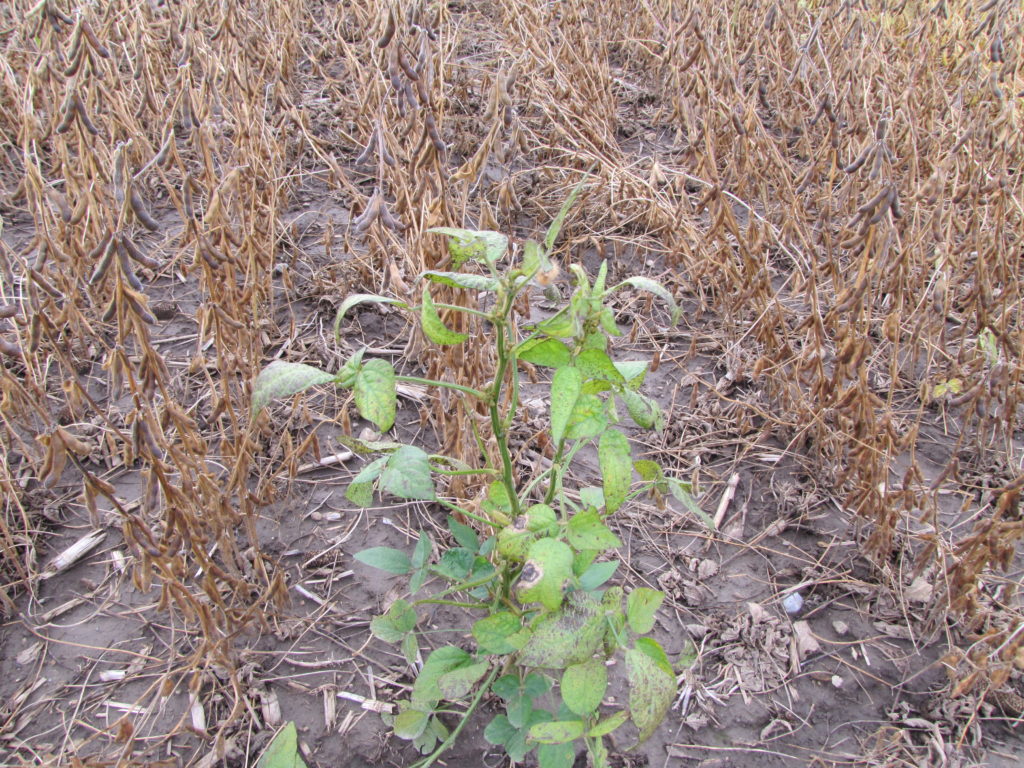