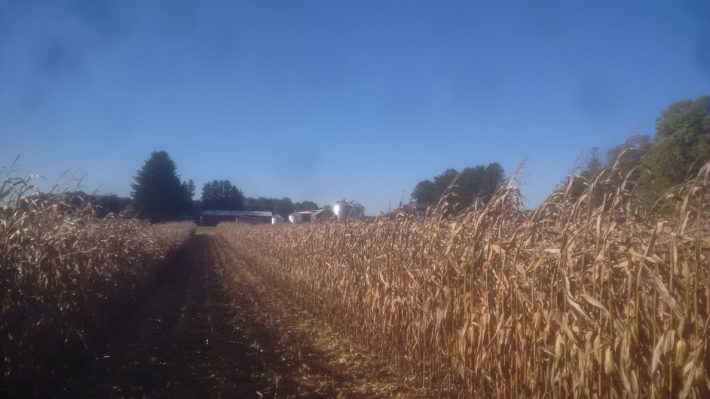 Unlike some springs where a large majority of the provincial crop is often planted in a 1 to 2-week window, frequent rainfall and poor drying conditions (overcast, cool temperatures) resulted in a long drawn out planting season. Little to no field work was completed in April. During the first full week of May, some corn planting started on well drained and lighter textured fields and pockets of the province where rainfall was limited including parts of midwestern Ontario (northern Huron, south Bruce andGrey counties). While planting continued on lighter soils, frequent rainfall events continued to limit planting for large parts of the province. By the third week of May, estimates suggested lighter soils or those areas which had avoided rainfall to be 50% or more planted, while the remainder of the province was still struggling to plant anything. With rain constantly in the forecast, urgency to get some crop in the ground resulted in planting conditions to be pushed in many fields by this time of the month. By the fourth week of May, lighter textured areas and those which received less rainfall were generally finishing planting while planting was in full swing on more medium textured areas. A good window during the first 10 days of June allowed a lot of corn planting to be wrapped up in these areas. Little corn planting was reported on heavy textured soils or areas which continued to receive significant rainfall until the middle to end of June.

Given planting delays, hybrid maturity switching was a common question. General switch dates are presented in Table 1 where the yield benefits of adapted hybrids are overcome by lower drying costs and maturity risks of shorter season hybrids. For silage, recommended switch dates are about 1 week later than grain. It is recommended to reduce crop heat units 100 CHU per week after these dates, although as experience from 2019 has shown, more aggressive CHU reductions are required if planting is delayed more than 2 weeks after these dates. While some corn acres were switched to soybeans, favourable corn:soybean price ratios in spring of 2019 resulted in many growers continuing to plant corn later than they might in other years.

OMAFRA completed its annual Pre Sidedress Nitrate Test (PSNT) survey June 17th to 19th. The survey samples corn fields around the V3-V4 corn stage measuring background soil nitrogen supply in fields which haven’t received preplant nitrogen for the purpose of gauging soil nitrate levels just prior to sidedress time. Due to late planting and wide variability in planting dates, it was difficult to pick a representative date. This sampling period was the closest to the V3-V4 stage across sampled fields, but crop stage ranged from just planted to well beyond the V3-V4 stage and was later than early June when typically conducted.

In 2019, the average PSNT value was 8.3 ppm, lower than the long-term (2011-2018) average of 12.0 ppm. This suggests natural soil nitrate supply in 2019 may have been lower than normal. Each 5-ppm change in PSNT generally changes N recommendations by about 30 lb-N/ac, though the actual number depends on soil nitrate level and yield goal (see PSNT recommendation at http://bit.ly/1SNkEM8). The cool conditions early in the growing season may have reduced nitrogen mineralization from soil. The practical implications of reduced nitrate supply may have depended on yield potential. Its possible optimum N rates may have been higher than normal in fields were planting was timely and yield potential remained high, while it may have been lower in fields planted very late where yield potentials were lower. June was generally favourable for in-crop management practices such as sidedressing.

Except for later planted fields, corn was generally closing rows by the second week of July. With limited rainfall since planting, moisture stress started to show up on soils with poor moisture holding capacity.

Earliest planted corn fields generally tasseled during the last 10 days of July, while others were tasseling by August 10th. Later (June) planted fields generally finished tasseling a week or so after this. Conditions were generally favourable, with moderate temperatures and several widespread thunderstorm events providing some moisture. Dry conditions were still a concern in northern areas of midwestern Ontario through to central Ontario. Fresh silks are the time of concern for ear moulds infection, but unlike 2018, large parts of the province remained relatively dry and were not receiving frequent rainfall to keep canopies and silks wet.

While western bean cutworm peak moth flights generally aligned with long term norms, moth flights were delayed and lasted much longer than what is typically observed, with moth captures lasting well into August and even September (Figure 1). While moths typically avoid laying eggs in corn fields after tasselling, it is suspected there was more egg laying in corn past this stage this year, possibly associated with the prolonged flights. This made scouting for control more of a challenge than other years. 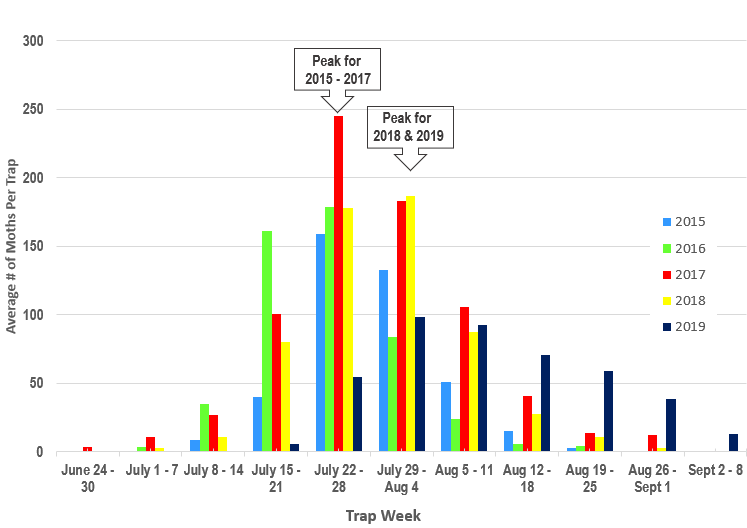 Cool temperatures in early September resulted in below average CHU accumulation and added to nervousness about the crop reaching maturity prior to frost or cool temperatures. Above average heat in late September and early October provided a significant boost for advancing grain fill before corn plants received frost in many parts of the province during the first two weeks of October. Very late planted corn that did not mature was still able to at least make ½ milk line or more before plants shut down, a threshold often used as critical for still making a grain crop, though test weights and harvestability can still be challenging in these fields.

Corn silage harvest was delayed due to crop maturity. Earlier harvest started in some areas the last week of September, though harvest wasn’t generally in full swing until early October. With a wide range of maturities and some crop suffering from moisture stress or frost damage, silage harvest was drawn out across the province. Some silage was still being harvested well into the second half of October.

The annual Ontario ear mould and DON (vomitoxin) survey was completed October 3rd to 9th. The purpose of the survey is to measure the relative levels of DON in the grain corn crop just prior to harvest to provide information for growers and industry. A total of 222 samples were collected from across the province. Visual mould symptoms and DON levels were much lower than what are typically observed, with 96% of the samples testing less than 2.00 ppm and 4% at 2 – 5 ppm. These were among the lowest levels since the annual survey started in 2011, and a welcome change from 2018. As in most years, even those with low risks, there was still the odd report of elevated fields, so grower monitoring is always suggested. The final report is available at https://bit.ly/36PPke4.

Ear feeding from western bean cutworm and corn earworm was present in some samples but at levels typical for most DON surveys. Where present, ear damage appeared to elevate risks for ear mould and DON. This was different than 2018 where pest feeding was minimal and ear moulds appeared to be silk-initiated. A greater incidence of late season corn earworm damage was observed in 2019, particularly later planted fields that were more attractive to corn earworm in Southwestern and Eastern Ontario.

Harvest of earlier maturing fields generally didn’t start until the latter half of October, while harvest for many others did not start until November. High moistures and frequent snowfall events from early November through to December resulted in a drawn-out harvest for many areas. Harvest was ongoing as snow and ground conditions allowed. As of the beginning of December, some estimates suggested 30% of the crop remained in the field, but harvest has continued since.

Yields reports have been highly variable. Growers in longer season areas which planted in reasonable time (by the end of May) and received timely rains reported excellent, and in some cases near record yields. While some growers still reported reasonable yields for late May and very early June planted corn, yields and test weights reportedly dropped as planting was delayed well into June.

With greater than normal acreages of late, very high moisture corn, there has been discussion on the risks and benefits of overwintering corn to reduce drying costs. While overwintering can reduce moistures and improve grain quality for combining, success of overwintering hinges on severity of winter weather. Ontario trials demonstrate relatively low risk in low risk environments, but significant to nearly complete loss in higher risk environments (Table 2). Standability is a key factor for assessing risk, and each field should be assessed individually. Factors which can positively affect standability include later maturity hybrids, lower populations, and fungicide use.

As of December 17, Agricorp reported that 47% of Agricorp insured acres had been reported with an average yield of 170 bu/ac. This is 95% to the 10-year average yield of 179 bu/ac for these same growers. Estimated corn yield for Ontario as a whole is 158 bu/ac (OMAFRA Crop Statistics), equal to the 10-year average grain corn yield (2009-2018) (OMAFRA Crop Statistics).

Final Ontario Corn Committee (OCC) corn hybrid trial results are available at the homepage of GOCorn.net. Yield results for some locations were delayed due to wet field conditions, but as of December 19, all data and trials have been finalized. Several locations have been discarded in 2019 due to the challenging season (inability to plant, late planting resulting in trials not reaching maturity, excessively dry conditions, lodging). Very high harvest moistures (over 30%) can impact accuracy of moisture and test weight determinations, so results at some locations should be analyzed with caution. There are several options for viewing data, including printable PDF, sortable spreadsheets (yield index, moisture lodging, company or hybrid name etc.) and yield by moisture graphs demonstrating the trade-off between yield and harvest moisture of hybrids within each OCC table. 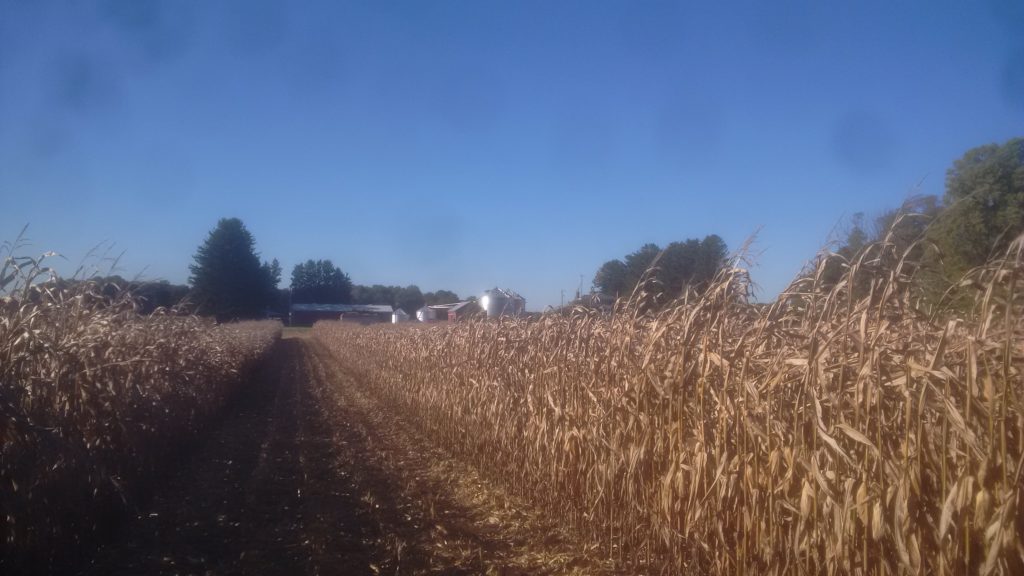