Some years it’s a pleasure to grow soybeans. Other years producing a crop can be a real challenge. The 2019 growing season will be remembered as being very stressful for those involved in crop production. During this challenging year, Agricorp focused on optimizing resources to ensure that customers had the information they needed and that program payments were delivered. When producers were unable to plant their spring seeded crops, the unseeded acreage benefit helped with fixed costs like taxes and land maintenance. While most acres did get planted, over 300,000 acres were unseeded. Reseeding benefit payments helped customers who needed to replant to help optimize yields. Production Insurance paid $96 million for spring planting claims in 2019. Unprecedented rainfall this spring resulted in the latest planting season in living memory. Delayed corn planting and poor winter wheat survival resulted in the largest soybean acreage on record at 3.1 million acres. Instead of planting in May, the majority of soybeans were planted in June. A few areas were forced to push planting right into July. For some this was followed by a dry summer, while snow in November and a wet fall hampered harvest for others. As of the middle of December not all soybeans have been harvested. Despite these challenges the overall crop turned out better than expected considering how late it was planted. For those that received good rainfall during the summer the 2019 crop turned out to be above average largely because of adequate moisture during key growth stages. This experience re-enforces the well-known adage that soybean crops are made in August. Rain in August, a warm September and a relatively late frost made this year’s crop. With 41% of insured growers having reported to date, the provincial average presently sits at 44 bu/ac. Considering the growing season this amazing yield demonstrates just how resilient soybeans can be. The 10-year average for those reported acres is 47 bu/ac. Although everyone wants to see an upward trend to their average farm yield considering the challenging weather, many soybean growers were pleasantly surprised with their yields in 2019.

Was it better to switch to an earlier maturing variety or stick with an adapted variety as planting was delayed this spring? There has been a trend in modern soybean production to plant early and to use long season varieties to achieve higher yields. This strategy has proven effective when soil conditions allow for early planting, but it’s also changed perceptions of what a “normal” planting date is for soybeans. Trials have shown a yield benefit to early planting, so growers moved to an earlier planting date. But this does not mean that soybeans must be seeded early to yield well or mature normally in the fall. An adapted variety still has over 90% yield potential when seeded during the first half of June. The rule of thumb is to plant the longest maturing variety that will mature in the fall and still allow for timely harvest. The general recommendation that has been used in Ontario is to consider switching to a shorter season variety if planting is delayed past June 15th. We tested this idea in 2019. The results showed that when planting is delayed past the middle of June an adapted variety is still the best choice. See results from 4 test locations in table #1. (Ridgetown, St. Thomas, Bornholm, and Elora) Switching to an earlier maturing variety cost yield. Conversely pushing maturities when planting is delayed is not advisable as many of the later planted long season varieties were over 18% moisture at harvest time and matured up to 2 weeks later. A shorter season variety is the correct decision if winter wheat is to be seeded after soybeans or if harvest timeliness is a problem in a given region. It should also be noted that later planting had less of an impact on yield than is typically experienced in 2019.

Glyphosate resistant Canada fleabane is now a significant problem across much of Ontario (Figure 1.). Even fields that had no populations last year had issues in 2019. Glyphosate application by itself should no longer be used for GMO soybeans. There are no in-season herbicide control options that work in soybeans to control resistant fleabane unless they are RR2 Xtend varieties. This weed must be controlled before the crop emerges when growing conventional varieties. A cereal rye cover crop will help to suppress Canada fleabane populations. 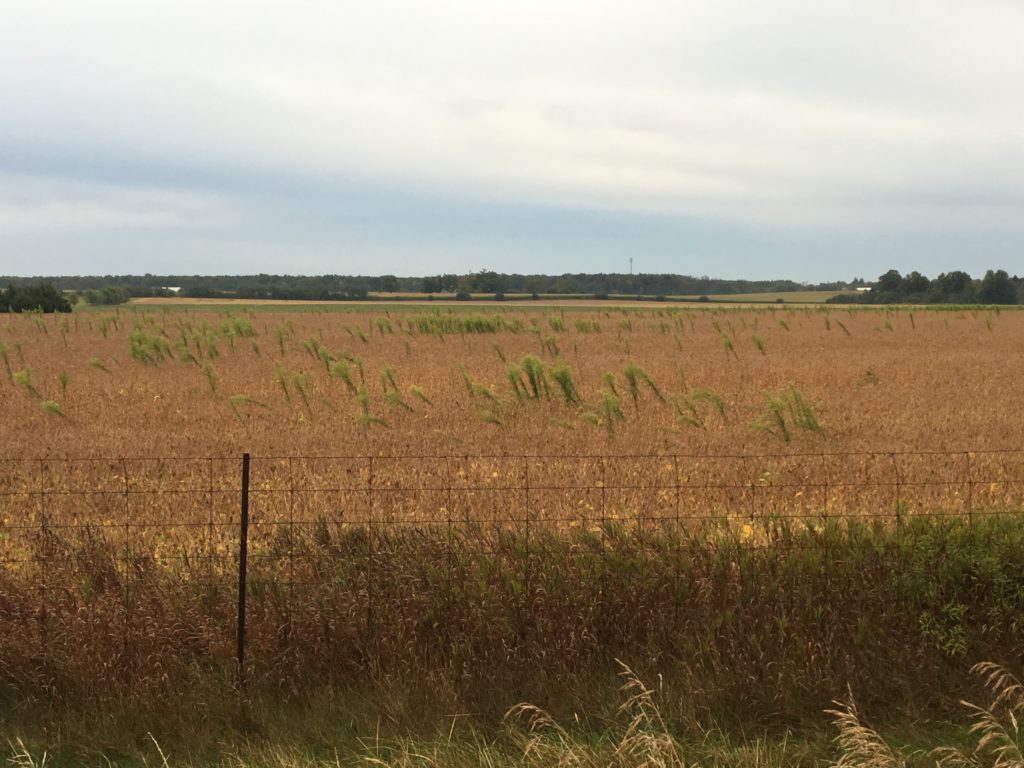 Waterhemp has spread further throughout the province during the 2019 season and can now be found in 11 counties (Bruce, Chatham-Kent, Elgin, Essex, Haldimand, Huron, Lambton, Middlesex, Norfolk, Northumberland and Wentworth). A close relative of pigweed, waterhemp is a competitive annual broadleaf weed that has been found resistant to four different herbicide groups. This makes management a challenge, particularly in soybeans. The use of pre-emergence herbicides is a critical tool for the management of waterhemp.

Bean leaf beetle damage is on the rise in Ontario. There has been a decline in the use of insecticide seed treatments on soybeans over the last number of years which has contributed to this increase. Damage comes from early season leaf feeding during the vegetative growth stages, but the most economic damage occurs in summer as beetles feed on pods (Figure 2.). This is mainly an issue for IP, food grade and seed soybeans. They feed on the surface of the pod which exposes the seed inside to pod diseases. Or they clip the pods off the plant, leaving them on the field floor untouched. Rarely is leaf defoliation a concern in the later R stages. 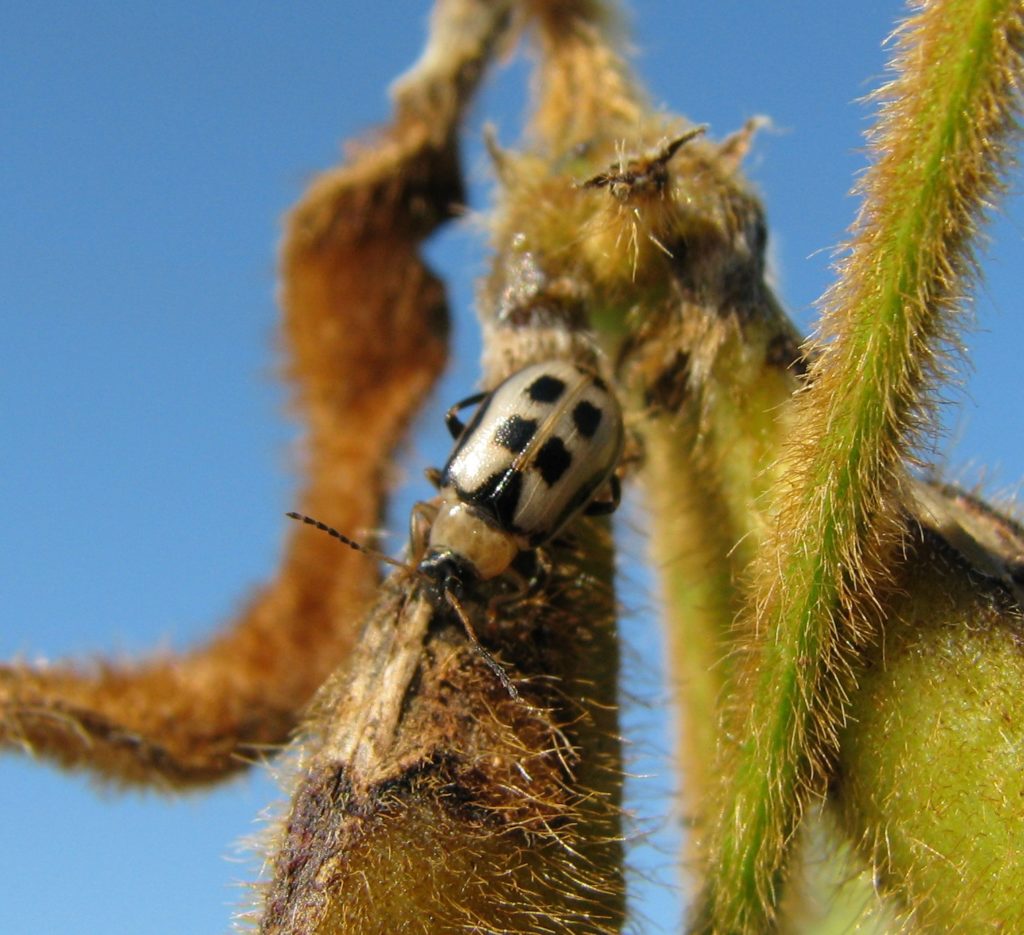 Figure 2.  Beetle feeding on pods which can lead to significant seed quality issues.

A soybean crop will remove a significant amount of phosphorus and potassium from the soil. (40 lbs./ac of P and 70 lbs./ac of K for a 50 bu/ac crop) Maintaining phosphorous and potassium levels represents a significant expense to growers and may pose environmental risks if soil test values are built excessively high. However, not applying enough fertilizer will reduce yields. Regular soil testing is the only way to manage soil nutrients properly. Ontario research has shown that fields low in both P and K will yield up to 20 bu/ac less than fields with adequate soil fertility especially in a poor growing season. Several trials were conducted in 2019 to assess if soybeans need Sulphur to achieve maximum yields. Five trials on clay loam soils yielded 60.0 bu/ac in the untreated check.  Additional nitrogen or sulphur did not significantly change yields. 100 lbs./ac of ammonium sulphate (24 lbs. of sulphur/ac) yielded 60.9 bu/ac, and 50 lbs./ac of urea (23 lbs. of nitrogen/ac) yielded 59.3 bu/ac. These results verify that soybeans do not need additional sulphur fertilizer. Sandy soils are more responsive to many nutrients including sulphur. Previous Ontario research has shown a response to sulphur for soybeans on sandy soils.