With some out of the box thinking, Ken Hartemink, hog and cash crop producer from St. Thomas, Ontario has mounted a strip tiller to the back of his manure tanker for one-pass manure incorporation and seedbed prep for next year’s corn crop.

Ken Hartemink is a hog and cash crop producer just outside St. Thomas, Ontario. Ken wanted to shift away from moldboard plowing his mostly clay-loam ground and move towards strip till for corn production. Given he was already broadcasting manure with a tanker pass after harvest, he decided to mount a strip tiller to his manure tanker to simultaneously inject manure and prep a seedbed for next year’s corn crop.

In 2019, Ken started with his existing 7,000 gallon Nuhn manure tanker, and after attending some strip till demos, purchased a 6-row Kuhn Gladiator strip tiller. For mounting the bar on the tanker, a 3-pt quick hitch was purchased and with assistance from Nuhn was mounted to a traditional manure injector lift mounted to the rear of the tanker (Fig. 1). Ken fabricated manure injection outlets from 3” tube which mount to the rear of the Gladiator shanks using the existing dry fertilizer tube mounts. He also mentions “because it is impossible to watch the strip tiller behind the manure tanker, I mounted a camera on the strip tiller to watch for residue plugging or other issues from the cab”. Ken took advantage of environmental cost share programs for both the strip tiller and injector lift hitch. 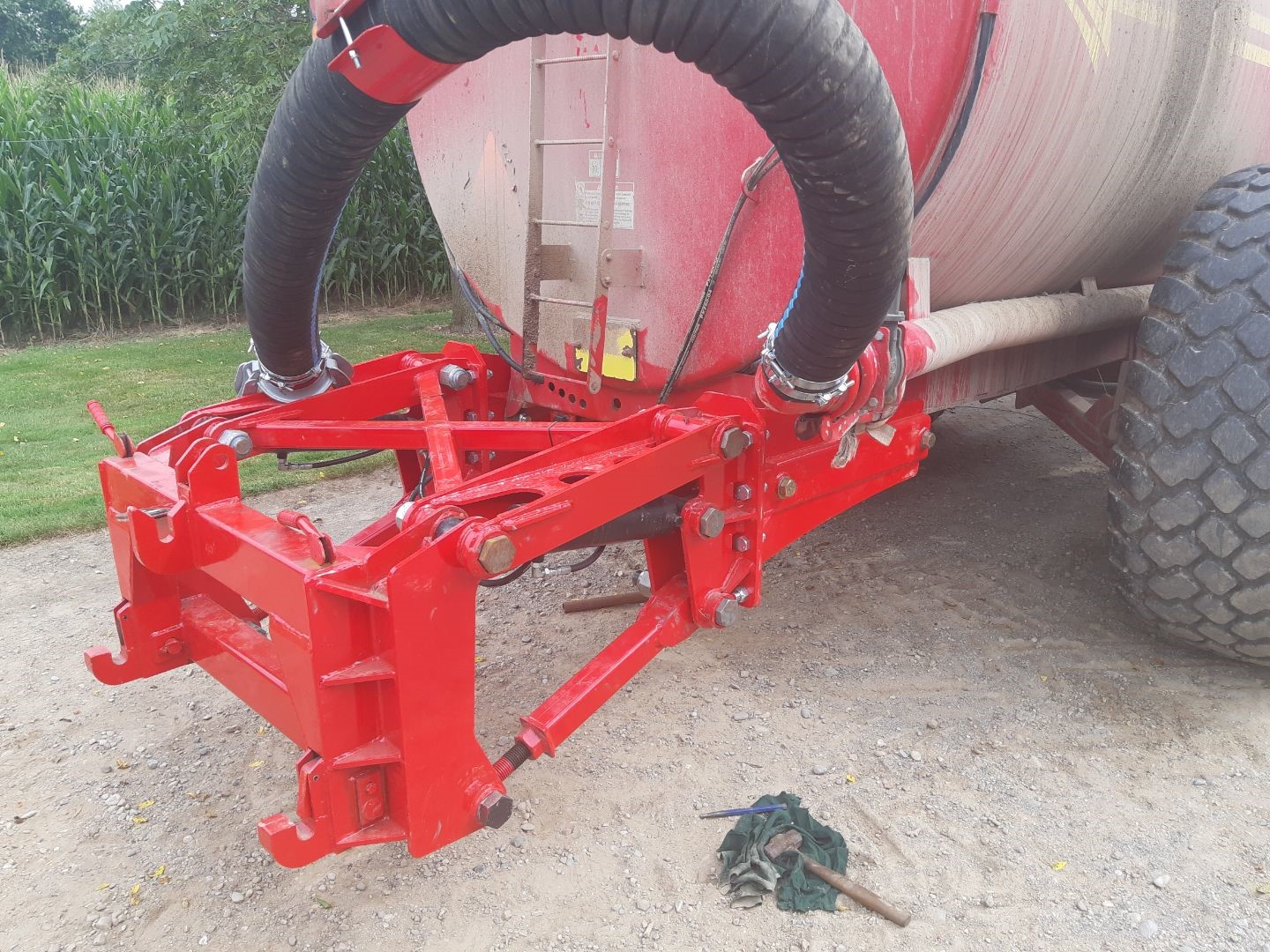 Manure and Strip Till Operation

Running shanks 6” deep, Ken says the strip tiller does a good job incorporating 4,500 gal/ac of liquid hog manure with little manure visible outside the strip (Fig. 2). With 280 horsepower upfront, he can run 5-6 mph which still provides proper strip till action, although power requirements can be noticeable going up hills. Ken does concede “one challenge with this setup is that at 60’ from the front of the tractor to the rear of the strip tiller, it can be a challenge to turn and line up square on 60’ headlands”. While GPS guides the tractor, Ken does not run implement guidance. Despite being 50’ behind the tractor, he says strip till passes appear to line up well. 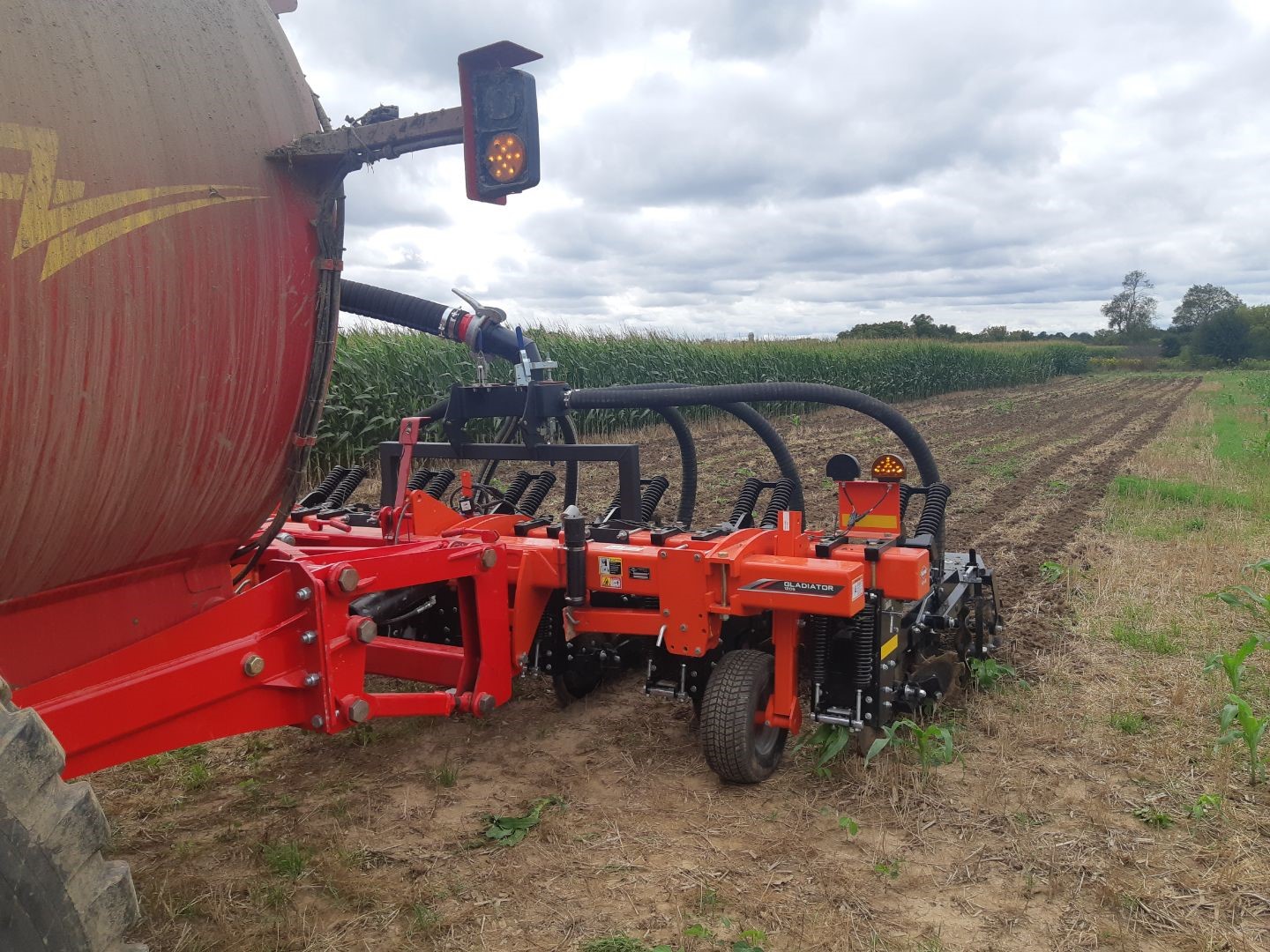 For feed requirements, Ken grows some corn on corn, so some fall strips are made in corn residue (Fig. 3). “When residue is damp in mornings or evenings, residue plugging can be an issue, but it flows OK when dry… this makes timely corn harvest very important” he mentions. Shimming row cleaners closer to the front slicing coulter and adding additional weight to the cleaners has reduced issues. 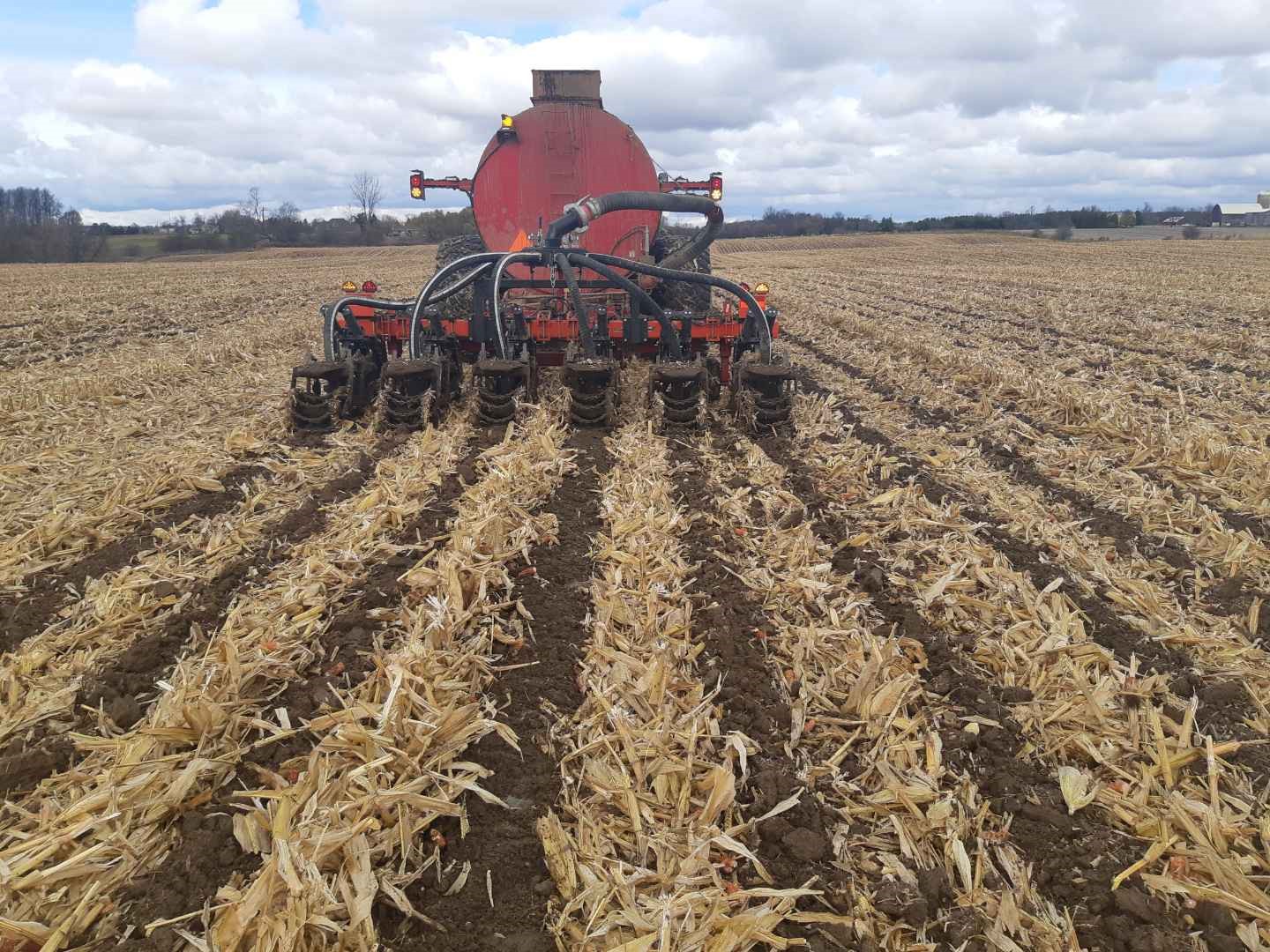 When asked about emptying tank loads, Ken mentions “the manure tank is equipped with a flowmeter – which allows me to view current application rates, create ‘as applied’ maps, and also lets me know when the tank is empty.  When spreading, I usually try to adjust field application rates so that I am empty at the end of rows, but if not, I do not have a problem with lifting the strip tiller out of ground and finishing off the swath with a later load”.

Ken says the addition of the strip tiller adds significant weight to the rear of the manure tanker, resulting in negative tongue weight when empty. For road safety, he has added additional rear wheel weights to the tractor and has converted the tanker to a ball-style hitch to reduce hitch play. In addition to the strip tiller, he also runs an Agribrink air inflation-deflation system for the tanker tires, running 40 PSI on the road, 24 PSI on headlands, and 18 PSI once on straight runs. Compared to always running 30 PSI, Ken says not only does this allow him to increase his tire footprint and reduce surface compaction in the field, running 40 PSI on the road has significantly reduced tire wear.

Just getting the strip tiller last year, Ken is yet to plant his first corn crop into the strips. His plan is to remove residue and lightly refresh the strips in the spring with coulter inserts he has built to swap in place of the shanks on the Gladiator. He has also built flat bar inserts in place of the chains in the rolling harrows in hopes of firming and sizing the strips with the bar edges, avoiding an airy berm that could dry out or negatively impact seed to soil contact. He won’t be running GPS on the planter tractor but given both the strip tiller and planter are 6-row, he hopes the planter will track the strips OK. We’ll have to follow up for additional gleanings after his first season in his manure strip system.