While the growing season started early in many regions, cooler temperatures over the last week have slowed progress. Manure applications continue where soil conditions are fit.

Winter wheat planted prior to mid-October continues to look good. However, some late planted fields have holes due to winterkill or excess water. Growers with a market for mixed feed grain are choosing to patch with spring wheat while others are patching with a cover crop or spring cereal to help keep weed pressure low in those areas. Decisions on stand removal should be made as late as possible in order to accurately determine plant population and health under good weather conditions. Ensure you are walking the entire field and taking stand counts throughout various parts of the field, not just the poor areas. If there are 7 plants/ft of row or less the stand should be terminated.

Most winter wheat has received a nitrogen application. Applications from this point on will be full rate, or second half of split applications made several weeks ago. Purpling of winter wheat leaves is also showing up more than normal (Figure 1). Purpling is usually caused by buildup of anthocyanins, temporary carbohydrate storage when photosynthesis outpaces carbohydrate demand. This may be due to warm, sunny days conducive for top-growth and photosynthesis, but very cold nights and soils which limit root growth. It appears to be more pronounced with earlier planted wheat (more top-growth) and more apparent in some varieties. This is expected to go away as temperatures warm, with little impact on yield. 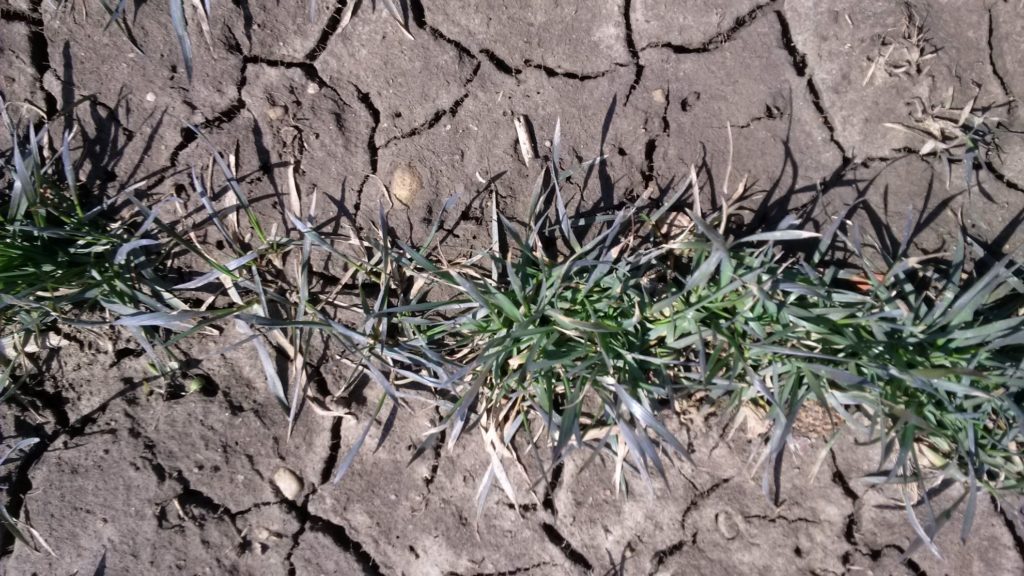 In most southern parts of the province, early-planted wheat is reaching Zadoks growth stage 30-32, which is the ideal stage for applying a plant growth regulator. Herbicide applications are expected to begin with warmer temperatures. To date, few winter wheat fields have received an herbicide due to cold weather.

Spring cereals continue to go in where the conditions are fit. With better conditions on the way, it is expected there will be a big push for spring cereal seeding later this week.

Planting continues where soil conditions are fit. Many parts of Ontario had an early spring, and hay fields have broken dormancy and started to grow earlier than usual. A frost may injure the crop, depending on severity and the plant’s growth stage.

For alfalfa, temperatures above -3˚C are considered a light frost. Leaves may wilt or develop white spots, and the tops of stems may bend over in a “shepherd’s crook” shape. In general, light frosts do not damage stems or growing points, and normal growth will resume with warmer temperatures.

A heavy frost causes more damage. Temperatures of -4˚C or below for at least four hours can kill stems and growing points. This will delay regrowth, as the plant must start over from the crown or auxiliary buds. Cutting frost damaged alfalfa will not speed up regrowth. If there is enough yield to take for feed, be aware that nitrate concentrations may be elevated in the plant.

Alfalfa seedlings are generally hardy until they reach the second trifoliate stage. Heavy frosts are most risky for seedlings between second trifoliate and the end of contractile growth (where the crown is formed). A few hours of temperatures below -4˚C may kill them. Fortunately, over-seeding with alfalfa is an option to replace a dead seedling stand, as the young plants have not started to release autotoxins yet.

The deadline for Agricorp Forage Rainfall Insurance applications, changes, and premiums is May 1st.

Temperatures below freezing pose a risk for winter canola that has begun to set flower buds and bolt. If buds are well protected in the whorl of the plant and temperatures are only below zero for a short time, the crop should be fine. If some buds or growing points are damaged but the plant is still alive it can likely regrow and recover. Prolonged exposure to temperatures below zero, or frost when plants are in flower are a greater risk for stand losses. If you can easily smell the canola when you enter the field, there are likely damaged plants and you should check for rotten roots.

There are only a couple reports of spring canola being planted so far, and no reports of planting yet in the northern canola regions. Most regions north of Guelph had snow this week, so there is likely another week before planting begins in earnest. Ideally, spring canola is planted prior to mid-May.

Very few acres of corn have been planted. Soil conditions are reported to be good, but cold temperatures have tempered very early planting. Those that have gone in are on light ground in the southern part of the province.

As a guideline, growers should not plant soybeans any earlier than they would be comfortable planting corn.