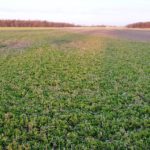 Alfalfa frost damage can sometimes occur in the spring after growth has started, resulting in damaged growing points. Some wilting can be visible about 24 hours after frost or some yellowish or brownish discolouration 3 or 4 days later. The top of the stems will typically bend over with a “shepherd’s hook”. Damage is often minimal and plants will grow out of it, but some yield loss and development delay can result. Thin alfalfa stands are more susceptible to frost damage.

The extent of frost damage to the alfalfa will depend on the severity of the freezing. Temperatures in the plant canopy level are usually “layered” and higher than reported “air” temperatures. Soil temperatures, slope, wind and the microclimate within a field can all have an effect. In mild cases, leaves at the tops of the plants become wilted and discoloured, but plants should completely recover. If the “shepherd’s hook” straightens, normal growth resumes. Frosts of as low as -3ºC can freeze leaf margins (resulting in white spots on leaves), but not damage stems or growing points.

In more severe cases, alfalfa stems freeze to various degrees and growing points are destroyed. Growth of alfalfa is from the tip of the stem where the growing point is located within a dense cluster of unfolded leaves. Temperatures below -4ºC for 4 hours or more will damage growing points and stems will die. However, it would take a lot of hard frost to kill an entire alfalfa crown and this very rarely occurs.

1. axillary buds on lower parts of the plant (if lower stems are not damaged), and/or

In most cases, axillary buds will become the main growing point if the terminal buds are damaged.

Plants use up some of their root reserves for their initial spring growth. After growing points are frozen, these plants will then have to initiate regrowth from new crown or axillary buds. This will delay the growth and developments of the crop as well as use up more of the remaining root reserves. Healthy stands will recover more quickly. Depending on weather conditions, some first-cut yield reduction and a delay in maturity can be anticipated. Where damage is uneven across a field, there can be some unevenness in maturity. If possible, delay cutting of severely affected fields to allow rebuilding of root reserves and full recovery.

Should I Cut It Now?

There is usually no benefit to cutting frosted plants. Cutting will not enhance recovery and forage quality drops rapidly. Severe frost kills the growing points, the same as cutting does. Regrowth would have to come from new crown buds and may further weaken the stand. Yield will be extremely low with poor quality. In extreme cases, frozen alfalfa that is harvested can be at increased risk for high nitrate levels.

Damage to new seedings of alfalfa is usually minimal. Companion crops protect new alfalfa seedlings somewhat against frost damage. Alfalfa generally has excellent frost tolerance up to the cotyledon and unifoliate stage. Some frost damage can occur starting in the first-trifoliate stage.  Only a few hours of temperatures below -4ºC can kill alfalfa seedlings at the beginning of the second-trifoliate stage. After contractile growth, where the cotyledons are pulled below the soil surface to form a crown, alfalfa becomes more tolerant again. Observe new seedings for 3-5 days after frost. Plants will initially wilt back. If the entire plant dies back to the ground, it is dead. To survive and recover, one set of leaves must survive. Reseeding may be required if less than 15 – 20 viable plants per square foot survive.