Crop development has been slow coming out of several days of well below seasonal, and in some cases, record breaking cold temperatures 1 week ago. Crop heat units (CHU) are behind where they were this time last year (127 vs 160 CHU since May 1 in Chatham-Kent). Heavy rainfall was predicted this past weekend. Many parts of Southern Ontario received 1-2” while parts of Essex and Kent Counties reported 3” or more.

More advanced fields in the deep southwest (Essex, Kent) are reporting flag leaves starting to emerge in mid September planted winter wheat, with expectations for emergence in more fields this week. Very cold temperatures in areas such as northern Wellington county has stalled development of the wheat crop for the past several weeks.

While cold injury symptoms from prolonged cold temperatures of well below zero have been observed for wheat (scorched leaf tips etc.), it was noted how surprisingly little injury is present despite how low temperatures were in the past 7-10 days. Given that temperatures were cool prior to this for an extended period, it was speculated that based on past Ontario research that  acclimation  to cold temperatures had occurred, and that a rapid switch from warm conditions to temperatures this cold would likely have been much worse.

Earlier planted wheat (pre-thanksgiving) is reported to be markedly better looking than later planted wheat. Fertility issues are also more apparent this spring – wheat which received seed-placed phosphorous appears better than wheat which did not, while S, N and Mn deficiencies are also obvious in fields where these are issues. Part of this may be due to cool temperatures reducing microbial activity slowing conversion of organic N and S to crop available forms.

While some diseases have been found, given the cool, dry conditions, levels remain low. Stripe rust has been observed as far north as Kentucky, Southern Illinois and Kansas, but inoculum load is lower than past years.

There have been questions about whether Cereal Leaf Beetle (CLB) has become more of an issue outside of its traditional hotspots in Ontario. If you are scouting and observe CLB, please consider participating in a survey tracking  where and when CLB emerges in Ontario (details HERE). There were also comments that CLB may be showing tolerance to lambda-cyhalothrin (i.e. Matador) in other jurisdictions, reinforcing the importance for rotating active ingredients of crop protectants.

Planting in the Southwest is reported to be in the 80-90% planted range, with many areas essentially complete. Some exceptions are those on lighter textured soils where planting was halted to avoid cold risks, areas which received greater rainfall, and heavy textured soils which were just becoming fit enough for tillage and planting prior to the rain.

Despite sub zero temperatures and snow, most report that planted seed looks healthy – roots, coleoptiles and seeds are firm with good colour (Fig. 1). Some of the very early planted corn (early April) is reported to be just emerging and looking good despite length of time in ground and temperatures these past couple weeks. Frost may have impacted emerging coleoptiles but is not expected to be an issue for the plants. 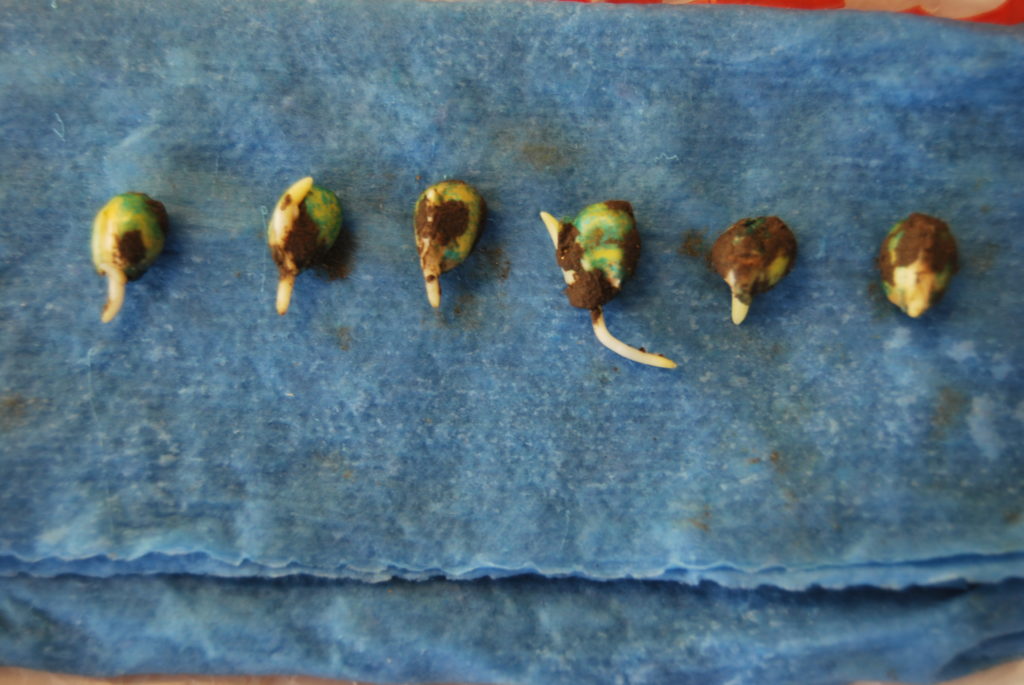 Figure 1. Seeds from Dufferin County planted May 4 before polar vortex and rainfall. Barely germinated in field, seeds still responding well to room temperatures under wet paper towel 24 hours after being brought in from field on May 19.

Black Cutworm are active in the US. No traps are believed to be up yet in the province, but  grassy/weedy fields or fields with spring manure should be watched as corn emerges.

With recent rainfall some questions came up over N losses. In general, soils were very dry prior to these rains, and N mineralization from soil has likely been very low. Losses are not expected to be a big issue from this rainfall event for most areas.

Seed corn planting was expected to start this week once soils dry.

Soybean planting ranges from just starting to 10-20% in more advanced areas north of London. Growers are reminded of the importance of pre herbicides for controlling glyphosate resistant fleabane.

Regarding soil applied herbicides and rainfall, a ½-1” rainfall within 7-14 days after application is good for optimizing performance – enough rainfall to put herbicide into soil solution for uptake by weeds, but not excessive enough to cause crop injury.

More advanced sweet corn under plastic was reported to be as far as the 2-leaf stage. While top growth will be impacted by frost, it is not expected to be lethal to plants.

A small amount of tomato planting started last Wednesday, but planted acreage is very low overall. Acreage is expected to be similar to last year.

There is a small percentage of sugarbeet acres which are yet to be planted as soil conditions have not been fit in those fields. It was also reported that replanting was much higher than normal this spring, possibly as much as 10-20% of the crop having been replanted, typically March and early April plantings. Sugarbeets usually do OK with cool temperatures but have struggled more than normal this spring.

For the southwest and Simcoe/Niagara areas:

For winter wheat, there have been 379 damage reports covering 21,425 acres. The primary peril is winter kill and excess rainfall. Damage reports have increased only slightly the past couple weeks. Approximately 360 acres of winter wheat were reported to be damaged by frost.

There have been 14 damage reports for sugarbeets covering 1,391 acres with the primary peril being frost followed by excess rainfall.

There are a few damage reports for corn (3,690 acres) and soybeans (2,220 acres) due to excess rainfall relating to weekend rains. However, it is too early to tell the extent of the damage at this time.

Clients should continue to contact Agricorp by phone or fax to report any damage or inquiries. All Production Insurance clients will receive a confirmation number and an adjuster will follow up as quickly as possible and normally within 2 business days. The Agricorp website at www.agricorp.com has up to date information on all programs and any news items that are applicable to the Programs delivered.