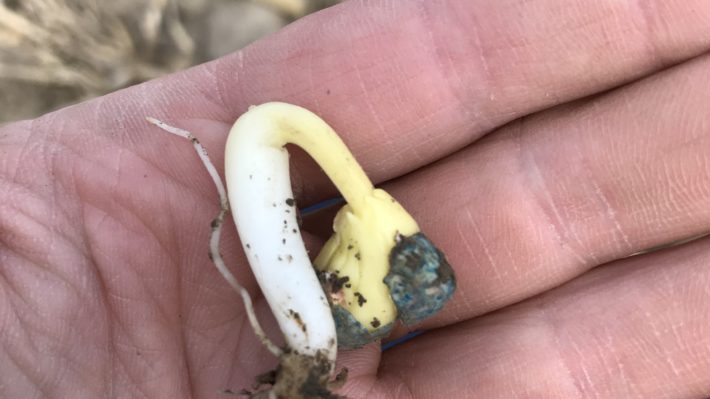 Soybeans
Horst Bohner chaired the meeting and started with a summary of soybean emergence and replants. Some soybeans are taking a long time to emerge. Beans are still emerging from early planted stands (where soils were dry). Plant establishment and the need for replanting due to crusting is worse this year than in recent memory, especially in Eastern Ontario and in areas of Southwestern Ontario on fine-textured clays.

The soil in no-till fields is pretty tight, even the loamy soils of Oxford county. Horst observed that some light tillage seems to be important in stand establishment for soybeans planted into corn residue. He also noted that any tillage done when soil conditions are fit results in a much better stand than in no-till (specifically planted into corn stubble). Discussion about other crops in rotation resulted in some interesting observations. If the previous crop was wheat or alfalfa then pre-tillage was not necessarily as important as when planting into corn stubble. Crop rotation observations at the Elora research station revealed that soybeans planted into a field with previous crop alfalfa, corn, and soybeans visibly different stand counts. The stand progression was best for alfalfa; planted into corn worked but stands were not as good, and soybeans planted after soys had the worst stand.

Questions about the type of pre-tillage and what implements are best lead to discussion about using the implement that will achieve the end goal – a level, un-compacted seedbed. RTS or Turbomax or similar implements did a good job for many this spring. In some fields, pre-tillage left a soft seedbed at the surface, but wet soils beneath the tilled zone have left a compacted layer.

When re-planting, is it better to use a planter or a drill? This question lead to discussion around filling in thin stands versus starting over. A final stand of 100,000 -120,000 plants per acre is ideal. Re-plant decisions are difficult to make when the population ranges from 100,000 in some areas but at less than 50,000 in patches. Then questions such as do I replant over top of an existing stand, or start over? Today re-planting to fill in a thin stand was considered the best option because it’s June and the beans are emerging so quickly.

When making these decisions, planting date is important. If the beans have been planted 3 weeks and aren’t up yet it’s time to re-plant once the calendar reaches June. At this time of year (remember in 2019 a huge acreage of beans was planted June 7-9) a grower doesn’t want to destroy the established stand more than necessary. Peter Johnson quoted that based on his(?) evaluations a planter with 30-inch spacings will take out some plants (2.5 bu yield reduction) but generally plants are only damaged where the coulter slices a corn plant. However, an aggressive drill can destroy up to 50% of established stand. Running on an angle with a 750 style JD drill took out about 20% of the stand.

Another issue in soybeans this year is seed corn maggot, especially where the crop was planted into a thick oat pea cover crop. Did it make a difference if the residue was worked or not worked in seed corn maggot populations? Flies are attracted to the smell of rotting organic matter – manure, green cover crop – so probably doesn’t matter. Even if manure was applied and incorporated, it will not solve the issue. The question was raised about the need to watch for seed corn maggot in the replants, however, practically speaking when planted in June the beans will come up so quickly and insects are cyclical and go through stages quickly at this time of year.

Edible Beans
Conversation switched to re-planting edible beans. Meghan Moran has sampled 25 fields for soybean cyst nematode – all tilled fields where the ground was soft. Beans are coming up quickly. A few fields had herbicide damage (Frontier) which reduced the stand. Frontier on edible beans should be incorporated rather than applied PRE. Dave Townsend said he has not had problems when used as a pre-plant incorporated herbicide but pre-emerge is not labelled and more injurious. Peter Sikkema concurred that in group 15 herbicides – Frontier is more injurious than Dual. .

Some of the beans that emerged through crust are “just sticks”, but Dave T. commented that if left it is often surprising how many beans come back. Even though dry beans may grow out of herbicide injury, it often leads to significant delays in maturity, and injured plants may be more delayed than the replanted crop. When the decision to replant has been made, it is recommended to terminate the existing crop and start fresh because maturity differences can cause problems at harvest time.

Other 2020 spring-related scouting observations are showing up, where dry beans were planted into good conditions, but now those beans in some areas of the field are suffering from root rot – most likely fusarium. If the field is re-planted, will the new beans also suffer from root rot? The consensus was that with warmer and drier soil conditions the beans should come up more quickly and will not suffer from root rot. Early planting was not a benefit to dry bean planting this year because cool conditions not conducive to quick emergence.

A lot of beans went in over the weekend with planting estimated at 75% complete – mainly cranberry beans still left to plant. Fields that were planted early and monitored over the weekend displayed crusting and fattened hypocotyls trying to break through the soil surface, where growers had to break crust with rotary hoes.

Peter Johnson commented that azuki beans keep emerging into beautiful stands, except where they are volunteer plants emerging in corn fields. The best control, according to Peter Sikkema, to control volunteer Azuki beans is a dicamba based herbicide and/or glyphosate (in Roundup Ready crops) have the best activity. Azuki beans can grow through the atrazine. The other option is to scuffle them out  – or use azukis as inter-row cover crop (tongue in cheek).

Corn:
OMAFRA’s annual province wide Pre-side-dress nitrogen test (PSNT) survey is being conducted this week. 12-inch soil samples are analyzed for nitrate nitrogen (NO3-N) and compared against results from previous years to determine relative N release from the soil. Samples are taken from fields that have not had more than 30 lbs N as starter and have not had manure or red clover cover crop. Results are expected be posted on www.fieldcropnews.ca on Thursday (June 11). Ian was asking for names of producers with potential sampling sites that have not had N applied yet.

Chris Roelands (Honeyland labs) has had a few nitrate samples come through the lab so far with results around 10 ppm. He thought this seemed about average, or maybe slightly below average. Peter Johnson commented that in wheat crops the N in overlaps and on headlands is visually astounding and that this big visual difference would suggest the total soil N release is behind.

A question came up about what population of silage corn should trigger a replant. Milk-per-acre captures the interaction between crop yield and quality, and so can be used to assess silage corn performance. Research from Wisconsin suggests that dual-purpose corn hybrids are within 5% of maximum milk-per-acre at populations above 28,000 plants/acre, while milk-per-ton (a quality indicator) peaks at 20,000 plants/acre and barely declines as populations increase. Without silage-specific data, the best guide for replant decisions on low populations of dual-purpose silage corn is the grain replant calculator at www.gocorn.net . There is a lot of genetic variability in silage-specific hybrids, and population effects may differ significantly for hybrids with silage traits (e.g. BMR, leafy), as selection populations and lignin deposition of these hybrids differ from grain and dual-purpose hybrids. Seed companies will have more information on target populations for hybrids with silage traits.

Dicamba ruling in US that restricts the use of post application – won’t affect Eastern Canada this year. The high heat and humidity forecast for today or tomorrow means that these are not good days to apply dicamba – it would be off label. Stewardship is the number 1 priority for maintaining this product as a tool for difficult to control weeds such as fleabane. Over the top application, post emergence, risks severe injury to crops in neighbouring fields but nice option for some difficult to control weeds. Know what high value and sensitive crops are being grown in the neighbourhood before planning a post emerge dicamba application. The best plan is to keep dicamba as a pre-plant application.

If one needs to make a postemergence dicamba application, there are two decision tools that help access the suitability of making applications. Although these tools were designed with dicamba in mind, they can be used for any type of pesticide application
1) www.sprayforecast.ca (Bayer CropScience)
2) www.engeniaspraytool.ca (BASF Canada)

Glyphosate rates to control weeds will vary depending on several factors. Things that influence rate to control weeds: Stage of weeds, species of weeds, temperature, moisture stress. Pigweed and small grasses are more sensitive to glyphosate than Lambsquarters and ragweed. As weeds get larger, higher rates are required to get the same level of control.

RU rate pigweed and grasses are sensitive to rates. Lambs quarters and ragweed less so. Same level of control as weeds get larger is higher rates.

Refer to the following article on how weed size affects weed control and profitability in field corn: https://fieldcropnews.com/2017/02/big-weeds-big-deal-situational-with-sikkema

Wheat:
Winter barley and cereal rye are in full head.

T3 fungicide applications have been going on since last week. In the Wellington-Waterloo region, applications have just started this week on the early fields. DONcast forecasting tool is showing low risk to date. In the last couple of days there has been a lot of physiological flecking especially in some varieties such as Pioneer R74. Physiological flecking observations around London, Haldimand, North Wellington. There is a small amount of septoria being reported and stripe rust has not been found yet. Stripe rust levels observed in neighbouring states remain relatively low.

There are obvious colour differences in overlaps of fields from nitrogen and sulphur. Differences are being seen in both split and single applications. Those who are making additional S applications are seeing colour improvement within a day of application. This year’s application of Ammonium Thiosulphate appeared to have lower available sulphur and reasons are being investigated. Past observations of S deficiency have resulted in yield losses as high as 20 bu/ac.

Spring cereals have advanced over past week and are tillering. Stands are uniform and look good.

There is one more Ag Breakfast meeting scheduled for Exeter-Mount Forest for June 23. Next week is the final Ridgetown-Simcoe meeting. Stay tuned for a new format for the diagnostic days event beginning in July. 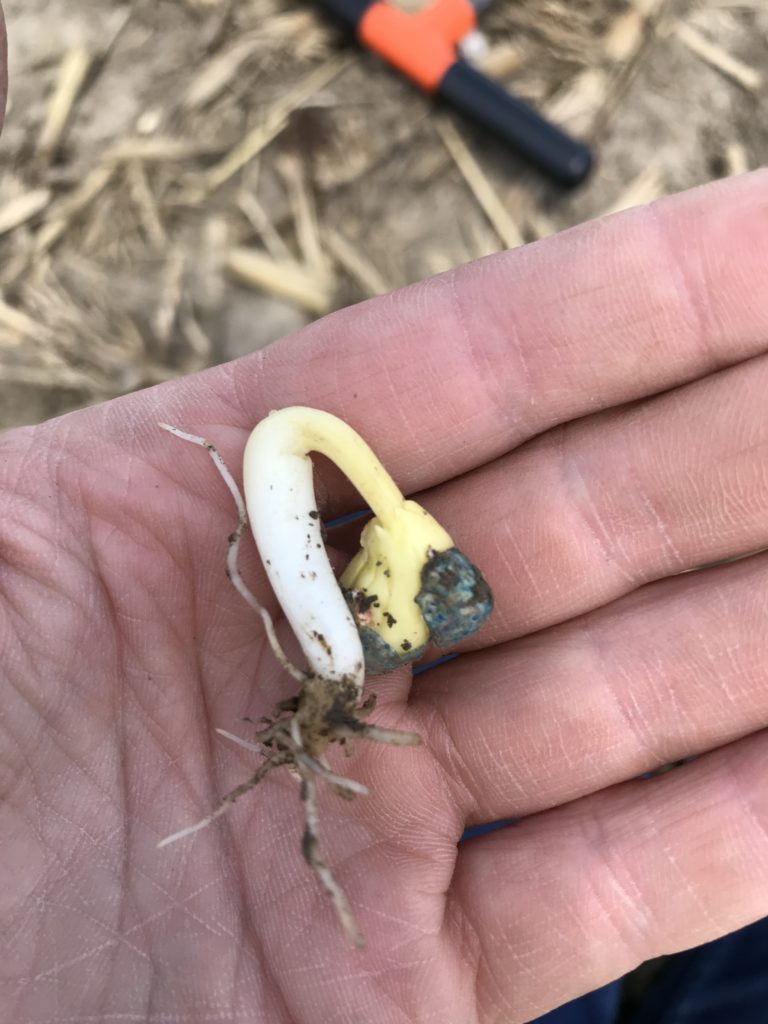