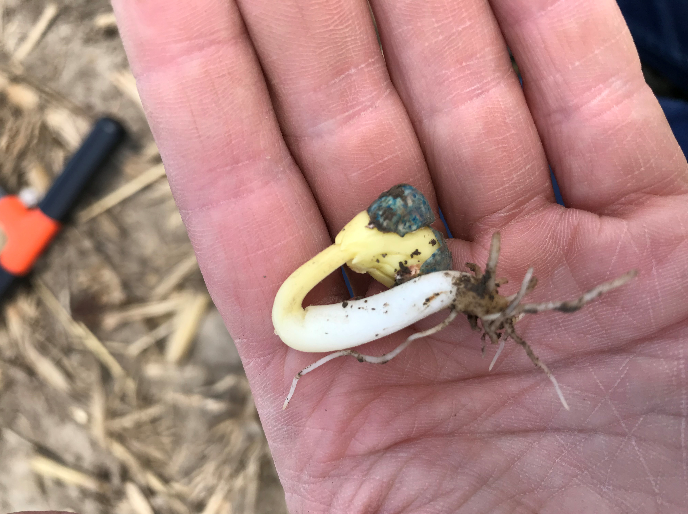 Some replanting has occurred especially on heavy clay soils with poor emergence.  Soil crusting and seed corn maggot feeding are the main issues this spring. If plant stands are below 100,000 plants per acre replanting is warranted. The same variety can be planted into an existing thin stand. Replanting with a drill may damage 30- 50% of the existing stand, but this may be reduced if the drill is run at an angle to the existing crop. Replanting with a corn planter will also cause damage to the existing plants but to a lesser extent. If seedcorn maggot is the cause of a reduced stand the replanted seed will likely not be impacted to the same extend because seed will be emerging quickly now due to warmer conditions. An insecticide seed treatment should be used when possible in these situations.

Early planted corn is in the V4 to V5 growth stage, while corn planted after the cold weather events is at the V1 to V2 growth stages. During the week of June 8th, OMAFRA collected soil samples for the annual Pre Sidedress Nitrogen Test (PSNT) survey. Results will be available as soon as possible on FieldCropNews.com. Nitrogen sidedressing is well underway southwest of London and is starting in areas further north and east.

Sidedressing provides an opportunity to adjust N rates for soil nitrate supply with a Pre Sidedress Nitrate Test (PSNT). Fields should be sampled with 12” soil cores just prior to sidedressing, avoiding any banded fertilizer, and kept cool until delivery to a lab. Fields that have received any broadcast or sprayed N will be artificially high and not provide accurate results. Fields with added mineralizable N sources (manure, red clover, alfalfa) should use N credits (NMAN, Pub 811) instead of PSNT – they may not mineralize N in time for PSNT but may still release N for crop uptake. Further details and PSNT recommendations are available in the Crop Talk Article “A New and Improved Soil Nitrate Test for Corn!” (link HERE) or in the corn chapter of OMAFRA’s Agronomy Guide – Publication 811.

It is estimated that over 80% of dry bean acres are planted, with kidney and cranberry beans left to finish. Adzuki beans are typically planted first and emerged fields are reported to look very good. Crusting prior to emergence has been an issue in some fields and producers have been observed breaking up crust (Figure 1.). Herbicide injury has been reported in white beans where pre-plant herbicides were not incorporated according to the label. Dry beans may grow out of herbicide injury but it often leads to significant delays in maturity, and injured plants may be more delayed than the replanted crop. There have also been cases of stand loss because of root rot on early planted dry beans. While planting conditions have generally been good, drops in temperature that have occurred in the past two weeks have contributed to plant stress and opportunity for root rot to set in. When replanting dry beans, it is recommended to terminate the existing crop because maturity differences will cause problems at harvest time.

Spring cereals are looking healthy and beginning to tiller. Winter barley is in full head and early planted fields look good. Rye has also headed out and reached anthesis in early-planted fields late last week. Winter wheat growth stages range from flag leaf to heads fully emerged. At this time fusarium risk is low. Monitor risk with the DONcast model at weathercentral.ca. Similar to the past two years, physiological flecking has been observed on specific varieties. Fungicide applications will not reduce physiological flecking.

Sulphur deficiencies have been noted in winter wheat and some fields have had a top-up of sulphur. There have also been obvious differences in colour of the wheat across nitrogen rates or where there are overlaps in nitrogen application. It is suspected that with the prolonged cool weather this spring very little mineralization occurred in the soil.  Therefore, there will likely be a benefit to those who applied higher rates of nitrogen.

Winter canola is in the final stages of flowering in the northern regions where it is grown and is in pod fill in southern regions. Flea beetle are still being reported in spring and winter canola in some areas. Swede midge have emerged and are being caught in traps. Producers are encouraged to have traps on their fields to monitor the presence and amount of swede midge.

A lot of first cut hay has been harvested this week across southwestern, central, and eastern Ontario. Yields are reported to be average to excellent; quality is not known at this time. Producers are encouraged to scout for alfalfa weevil, alfalfa snout beetle, potato leaf hopper and true armyworm. 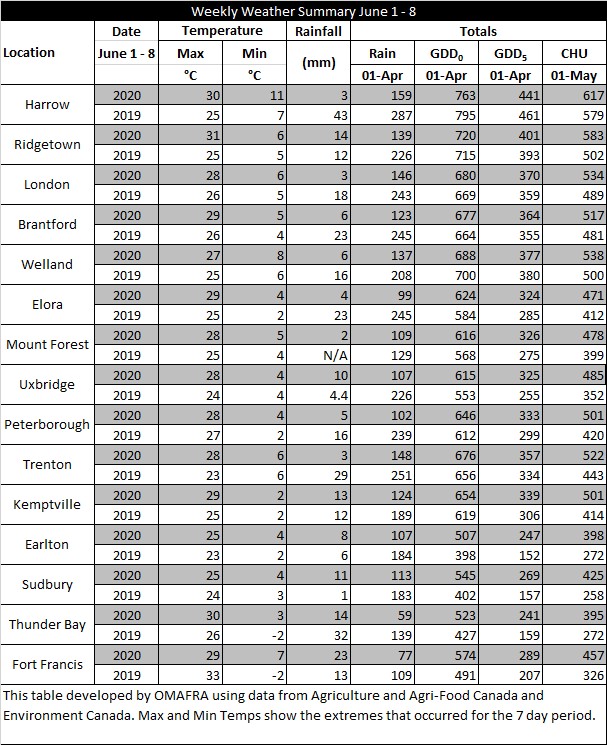