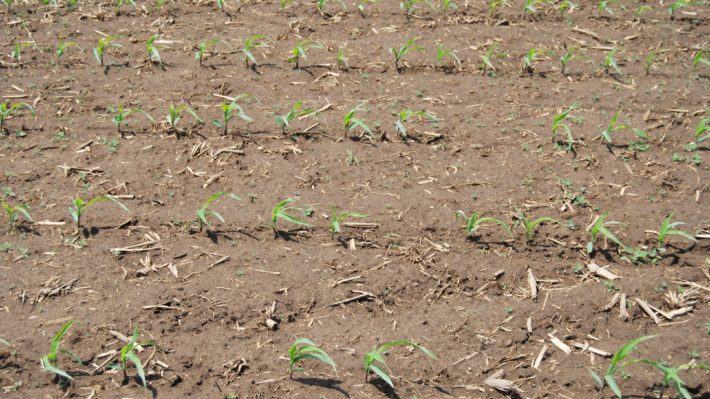 Listen to the audio version below or subscribe on iTunes, Google play or Spotify

While planting has largely been completed the last number of weeks, corn is still being planted on heavier soils which have just recently been fit enough for planting (Niagara/Haldimand, Southern Lambton, SW Kent). If rainfall further delays planting, more remaining acreage may be switched to soybeans.

Despite great planting conditions, there are reports of soil setting hard, clodding and crusting which have caused emergence issues, particularly in the southwest. Some stand issues may also be related to cool temperatures, hybrid vigour and time in ground prior to emergence (Figure 1). Where emergence is an issue, most report stands sufficient to keep, though some replanting has occurred. The Replant Decision Aid at GoCorn.net may assist replant decisions, estimating yield potential of existing stand, yield potential of replanting, and the costs associated with stand removal and replanting.

Corn planted early May is generally in the early vegetative stages (V2-V3). Corn planted after the cold weather period has emerged very quickly thanks to very warm temperatures last week. Sidedressing has started on more advanced, early planted corn reaching 5-6 leaf stage in the southwest. OMAFRA conducts an annual soil nitrate survey to help gauge soil nitrogen mineralization around the V3-V4 stage and is planned to start the beginning of next week. 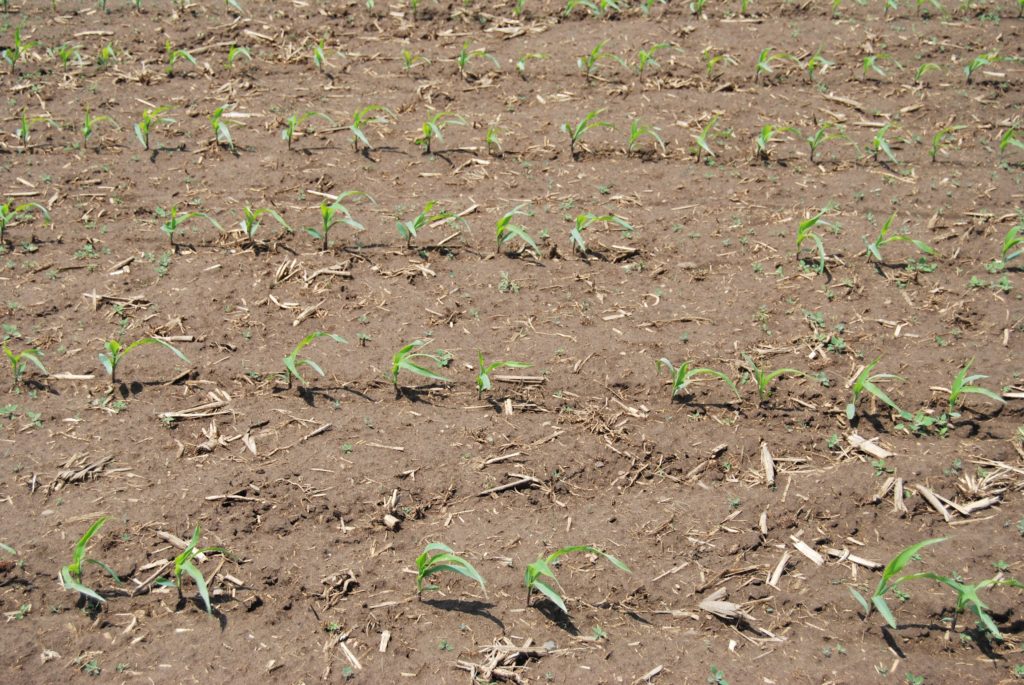 Figure 1. Corn stand with some gaps where seeds have failed to emerge. Final population in this field is still very acceptable to keep.

Soybean planting has wrapped up in many areas but continues on heavier textured soils. There have been some reports of difficulties with residue, particularly late harvested 2019 corn fields where residue is tough and is keeping soil conditions damp. Soybeans planted prior to the cold weather in early May are reported to have pulled through with good stands. Like corn, some emergence issues have been reported due to crusting or hard soils.

Seeding rate suggestions in soybeans have a margin of error for stand loss, and soybeans have a strong ability to compensate, so some stand loss is tolerable. General guidelines are for at least 100,000 plants per acre, or 120,000 plants per acre on clay or other soils where plants may not fill out as much. Further considerations for soybean replanting are available in the “Soybean Replant Consideration” article on FieldCropNews.com (link HERE).

Dry bean planting is in full swing, with adzuki planting nearing completion and other classes of dry beans about half finished. Some growers were waiting to avoid the cool temperatures of this past weekend as well as heavy rains and thunderstorms in the forecast this week.

Winter wheat generally ranges from close to flag leaf emergence to heads fully emerged for early planted wheat in the far southwest. T3 fungicide applications for Fusarium Head Blight have started in fields reaching anthesis and will continue as other fields reach this stage. Nutrient deficiencies (N, S) are reported to be more apparent than normal this time of year, likely due to delays in mineralization from soils due to cool soil temperatures early in the growing season. Very little foliar disease pressure has been reported.

Cereal aphid populations appear higher than normal this spring. The threshold prior to heading is 12-15 aphids per stem and after heading is 50 aphids per stem. Few fields at this point have been over threshold. The Cereal Aphid Manager App can help guide decisions, taking into account weather forecasts and beneficial insect populations.

Rain and warm temperatures have spurred forage growth. Cereal rye harvest has been underway or completed this past week, with yields reported to be average to above average. First cut alfalfa has started this past week on some dairy farms. Insect pests have been found in fields across the province, and producers need to scout to protect forage yields.  Alfalfa weevil has been found in the southwest, while alfalfa snout beetle is feeding on new seedings in the east. Producers in counties on the northern shores of Lakes Erie and Ontario should start scouting for potato leafhopper, as these pests blow in from the southern U.S. on storm fronts. True armyworm was detected in grassy fields earlier this year in NY state, and populations may be building in pastures and grass or mixed hay fields. More details on scouting for forage pests can be found in OMAFRA Publication 811: Agronomy Guide for Field Crops.

Winter canola fields are in the bloom to pod fill stage. Flea beetle feeding has been a common report in spring canola. Early planted fields which were slow to emerge and grow through the cool conditions of early May are most affected. Quicker growth of later planted canola has kept the crop ahead of feeding injury. Growers should scout fields, particularly those with thin stands (<5 plants/ft2) most at risk from feeding. The action threshold for flea beetles is 25% defoliation. Details for managing flea beetles in canola are available in the “Flea Beetle in Spring Canola: Monitor, Identify Fields at Risk & Consider the Weather” article on FieldCropNews.com (link HERE). Swede midge have not been reported yet but typically emerge at the end of May or early June. Canola fields with slow growth from cold temperatures or flea beetle feeding may be at greater risk of swede midge injury. 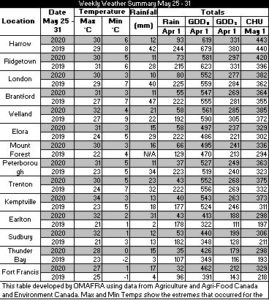 The format of the OMAFRA weekly weather report has changed. More locations have been added and assessment of growing degree days (GDD) for base 0 and 5 have been added to assist field and horticulture crop farmers. We have also changed from reporting the weekly values for the 30-year average to the values for the same week in 2019.  We are working toward an additional online report that will provide access to more weather stations, daily temperature and precipitation values and values for corresponding weeks based on the previous 2 seasons and the 5 and 10 year normal for those weeks and the seasonal accumulated values.