Land rolling helps conserve moisture, levels the soil, and pushes small rocks into the ground. Some producers roll immediately after planting, while others wait until the soybeans have emerged. Rolling immediately after planting provides improved seed-to-soil contact and reduces the likelihood of plant injury. But, it also increases the chance of soil crusting, which hinders emergence. Some growers choose to roll after emergence because there have been reports that early season stress from post emergent rolling may shorten internodes, increase pod number, and thereby increase yields. 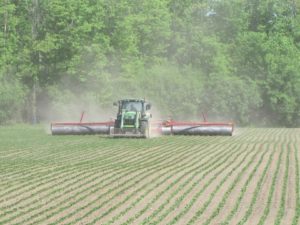 OMAFRA conducted soybean rolling studies using a 30 inch diameter smooth roller. All treatments were replicated 3 times. Soybeans were planted in 15 inch rows with a row unit planter. A small tractor with 9 inch wide tires was used to avoid driving on emerged plants with tractor tires. Rolling was conducted in the afternoon when plants are less turgid and recover more quickly from rolling.

Rolling soybeans after emergence provided a small yield gain but the statistical significance of the yield difference was weak. See table #1. There was no evidence of more pod development, so the improved yield was likely the result of better combine header performance. For those growers that choose to roll after emergence this study provides strong evidence that no yield loss is associated with that practice as long as best management practices are followed. Rolling at the first trifoliate is the best time to maximize yield gains and minimize plant stand losses.

Rolling emerged soybeans did not significantly reduce plant stands until it was delayed to the third trifoliate leaf stage. Once beans reach the third trifoliate stems beak off more easily killing the plant. Tilled fields sustain more damage since the small plants do not have the protective cushion corn stalk residue provides in a no-till system, although the final yield response was equal in both tilled and no-tilled fields.

The best growth stage to roll soybeans in this study was the first trifoliate leaf stage (V1). Considerable damage was caused if rolling was delayed to the 3rd trifoliate leaf stage. For producers that typically roll fields immediately after seeding this study provides strong evidence that no yield reductions occur if rolling is conducted after emergence at the V1 stage. Rolling should be conducted during the heat of the day to ensure that soybeans are not turgid (stiff). Soybeans are the most turgid during the morning hours and rolling during that time will result in more plant injury. Seedlings are also vulnerable to being broken off at the time of emergence so post emergent rolling should be delayed to the first trifoliate. Although rolling at the unifoliate leaf stage can be accomplished successfully it is better to wait until the first trifoliate. Some seedlings may still be emerging when the crop is at the unifoliate stage and plants are more flexible at the first trifoliate stage. A smooth roller should be used when rolling post emergent not a “packer roller” or Brillion style roller. Those will cause too much damage.