Corn rootworm adults emerged a few weeks earlier than usually and are quite abundant this year.  This is particularly concerning when the adult populations are high in corn on corn fields planted with a rootworm Bt hybrid. This could be an indication that rootworm populations have developed resistance to the rootworm Bt traits involved. To know for sure if your hybrid has a rootworm trait, refer to the 2020 Canadian Bt Corn Trait Tables. 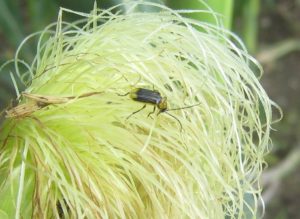 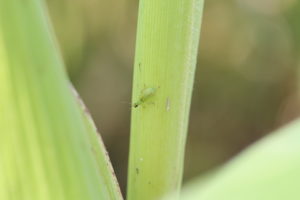 What should you do if you see significant populations of rootworm or signs of goosenecking injury in your rootworm Bt fields?  Contact your seed company agronomist and Tracey Baute, OMAFRA (tracey.baute@ontario.ca) and Jocelyn Smith, University of Guelph Ridgetown Campus (jocelyn.smith@uoguelph.ca) or your provincial entomologist, if you are reading this from another province.  It is important that these cases are documented, root injury ratings taken and beetle collections made to test the beetles susceptibility or lack of susceptibility to the Bt traits. If resistance is suspected, some mitigation measures can be taken to reduce the risk of the population continuing to spread in the area. Most effective measures include rotating out of corn in those fields for one year or at the very least, switching to different rootworm traits and rotating out of hybrids that contain the rootworm Bt trait that is no longer effective. This option is less ideal as cross resistance to multiple rootworm traits has been documented in the US.