By Ian McDonald, OMAFRA with valued contribution from Lawrence Hogan and Steve Howard with thanks.

These two brothers have set a lofty goal for their farm west of Lucknow. Maximize their soils health and protection which in turn will optimize the farm economics and reduce its environmental footprint.

To achieve their goal they have set specific objectives for the farm:

The farm is not large, fancy or employing the biggest and newest equipment. But it’s scaled to meet the needs of the two families and spread out the workload to make it manageable for the two of them. The soils are mostly level with some topography over their 900 acres. The soils vary from sandy loams to clay loams, often in the same field. All the land they farm is within 10km’s of the two home farms.

I had the chance to explore their corn production system last fall and this spring. They use a “bio strip till” system. In their rotation, corn follows winter wheat, which follows soybeans. Coming out of wheat they direct plant two different cover crop mixes in bands across the width of the drill. The drill has been modified to accommodate this (Figure 1). 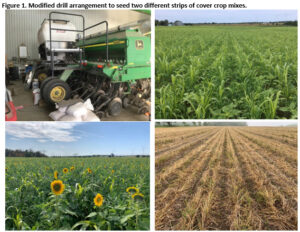 The Salford tank contains seed mix for the corn row positions. Tubes run directly to the seed openers which have a “Y” configuration receiving tubes from both the drill box and Salford tank. When seeding wheat the Salford tank supplies MAP to each run. Table 1 describes the cover crop mix used. The Corn Row Strip receives a mix of Chickling Vetch, Sunflower, Austrian Winter Peas, Faba Beans and Phacelia  which will die out with frost over winter. The inter-row area is seeded to a mix of Sorghum Sudan, Pearl Millet, Oat, Barley, Cereal Rye, Cowpea, Flax, Balansa/Crimson/Single cut Red Clovers and Hairy Vetch. Of this mix the rye, hairy vetch and sometimes various of the clovers will survive the winter. Cover crops between the two positions average 42 lbs/ac and cost $30.31/ac. 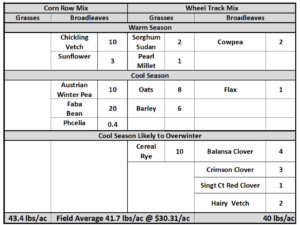 With this arrangement the fields look a little “ratty” in late fall and early spring, but when you change your paradigm on what makes a field “look good”, you see it’s a beautiful thing! The cover crops form what looks like a dense canopy but in reality is rather light, but more than adequate to protect and feed the soil. After seeding with no intervention other than row cleaning and planting, this is what the field looks like as the corn begins to emerge.

This cover crop arrangement is seeded as soon after wheat harvest as possible to quickly cover the ground with a diverse mix of species. The ground is left alone until spring when they get ready to plant corn.

Lawrence and Steve purchased a 16 run row clearer from Ferme Lamoureux of St-Phillippe de Laprairie, PQ which they upgraded from an 8 row unit previously. They have since adapted this unit with some local fabrication by adding  set of shark tooth spider notched discs cut from used JD no-till planter disk plates as shown in Figure 2. This machine gives them a bare soil strip 12-14 inches wide. The units sweep away the dead top growth of the winter killed cover crop mix in the corn row zone. It does next to no tillage! Steve puts the row clearer in the field about 1-3 days ahead of the planter. Running the 16 row unit at 6.5 mph burning about 0.6L/ac of fuel using a 90 hp tractor. 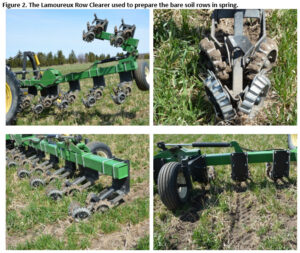 One problem they have to plan for is volunteer wheat germinating and getting established in the corn row strip. The rest of this species will naturally die over winter. If wheat gets a good hold after harvest it’s living overwintering habit and strong roots in the spring resist the action of the row clearer and make for a less than desirable biostrip. Combine setup to reduce harvest losses is critical. The worse place for this in the field is obviously the area right behind the combine. Sometimes they have to employ their custom spray buggy (Figure 3.) to spray out four 12 inch wide rows of the cover crops directly over each combine pass. This makes the row cleaning in this area optimal the next spring.

They don’t often have to use this outfit but they are equipped and prepared to if the fall conditions warrant it. It’s usually only employed if tiling work occurred which has to be leveled out with cultivating. The other time they may use it is if cover crop seeding is delayed by wet weather. This delay can allow the volunteer wheat to get established before the competition from the newly seeded cover crop. If they stay with the straight no tillage status and cover crop seeding occurs shortly after harvest the wheat isn’t a problem.

In Figure 3, this field was recently tiled and had to be cultivated to level and smooth out the roughness. In this case they used the spray buggy system to kill the volunteer wheat germinating in the area behind the combine which was stimulated by the tillage. In this case the strips beyond the 4 herbicide cleared paths doesn’t look as good as normal after spring stripping because of volunteer wheat growing throughout the field. The overwintered live wheat plants are harder for the row clearers to clear because of the strong living root system. 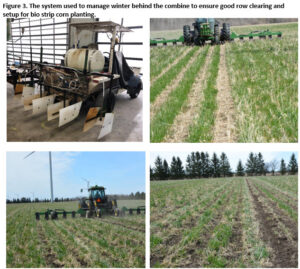 Lawrence plants corn with a 8 row Max Emerge corn planter (Figure 4.). The planter is equipped with dry and liquid fertilizer. Starter is applied as 100 lbs/ac of MESz and 30 lbs/ac of 0-0-60 and 12 gal/ac of a UAN/ATS mix of 12-10-0-10S-1Zn all in the  2×2 band. A further 6 gal/ac of the UAN/ATS mix is dribbled on the soil on the opposite side of each row unit. This additional component can’t be added to the starter band because of the salt index within the mix already in the 2×2 band. Additional P gets into the system broadcast ahead of the cover crop seeding following wheat harvest as well as 100 lbs/ac of MAP with the wheat when planted.

The planter is setup for no-till and equipped with hydraulic downforce, and yetter twister closing wheels. This setup is pulled by 105 hp tractor running 4.5 mph at 1600 rpm burning little fuel compared to other systems.

Once the corn is planted they generally come back with a burn down and residual herbicide program of glyphosate + primextra + dicamba to kill off the over wintering cover crop mix and provide residual control for emerging weeds.

Side dress UAN nitrogen is knifed in when the corn is V5-6 stage. This is their 3rd year with the biostrip system and a previous additional two years of experience with the row clearer.

In Figure 4. The planted rows look “clearer” then in the previous fields where the pictures of the row clearer were taken. This field was not tilled and the cover crops were planted shortly after wheat harvest with no tillage and therefore able to suppress volunteer winter wheat germination so the row cleaning worked better in this field. 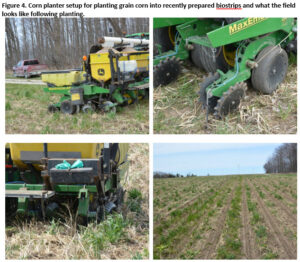 Corn has been yielding 9% above their 10 year crop insurance average in the 3 years of this system including the yield struggles of 2019 like everyone else.