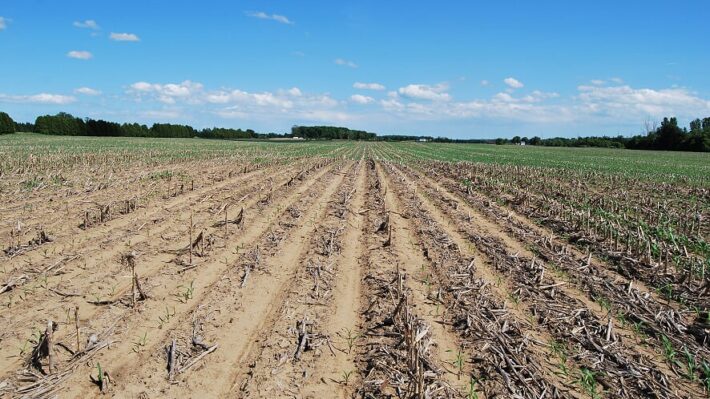 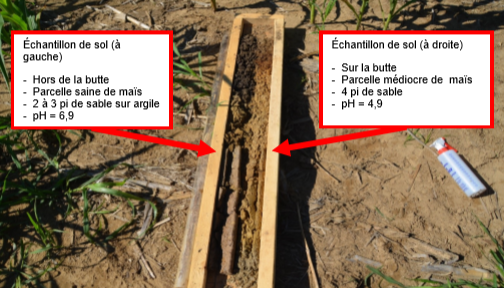 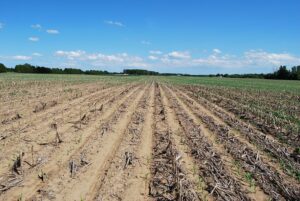 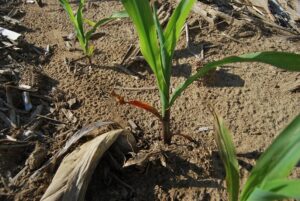 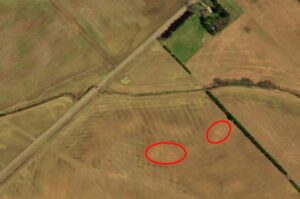 While high pH knolls tend to be more common in Ontario, often caused by soil erosion leaving higher pH calcareous subsoils, this is not the case for all regions.

How do low pH knolls develop?

Low pH knolls (Figure 1) can develop on undulating landscapes where surface soils formed from deposits of sand, such as where glacial meltwater deposited sand at the entrance to historical glacial lakes (Webber and Hoffman, 1967). Tillage, water, or wind erosion may have also removed topsoil from these knolls. Soils naturally acidify over time through rainfall, organic matter breakdown, and mineral weathering, and through applications of ammoniacal fertilizer. Sandy soils have less ability to buffer against these processes, resulting in lower pH. 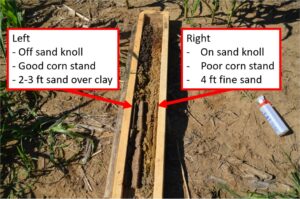 We visited a field in Kent County in May where a producer was struggling with crops establishing on some sandy knolls (Figure 2). There were questions as to why – soil pests? Nematodes? pH? Fertilizer injury? The first step in diagnosing emergence issues is to dig for clues. Most seeds appeared to have germinated, but many failed to emerge and seedlings appeared off colour with poor vigour. While the odd wireworm was found, most seedlings failing to emerge did not show obvious feeding damage. Un-emerged seedlings were also not showing clear, characteristics fertilizer burn symptoms such as blackened roots, missing or “nubbed” seedling roots or root tips.

With no obvious symptoms to explain stand loss, soil samples were collected from the poor establishment area on the knoll and from areas off the knoll where the corn stand was healthy. Two major differences jumped out – much lower pH and magnesium in the poor stand on the knoll compared to the healthy stand around the knolls (Table 1).

Crop growth suffers if pH is below optimum, which varies by crop (Table 2). A reduction in pH itself does not impair growth, but changes in availability of elements and crop nutrients in the soil can. Some elements such as aluminum can become more plant available to the point of toxicity and impair root growth while plant nutrients (calcium, magnesium) can change to less plant available forms and become deficient (Figure 2). For legumes, low pH can also inhibit nodule formation. Topsoil erosion may also impact moisture and nutrient holding or supplying capacity.

Managing in-field variability due to knolls

Soil sampling should be completed to confirm if low pH is an issue. Directed sampling on the knolls is important. For instance, grid sampling had been completed in the case study field above but did not capture the low pH on the sandy knoll.

Whether lime is required depends on soil pH and crops grown. If the soil sample pH is low, a buffer pH test result is included with sample results to indicate how easily soil pH will change. Buffer pH along with a target pH depending on the crop and soil type (Table 2) is used to provide a lime rate. Full liming recommendations are available in the Soil Fertility and Nutrient Use chapter of Pub 811 Agronomy Guide for Field Crops, or the Soil pH, Liming and Acidification chapter of Pub 611 Soil Fertility Handbook.

Sand knolls may be variable across the field. Field experience may be enough to locate, sample, and address issues. Other tools – bare soil imagery (Figure 4), soil sensor measurements (e.g. electrical conductivity) or historical yield data (if knolls consistently perform poorly) may assist in locating or delineating these areas. Variable applications of lime or magnesium fertilizer may be considered where low pH areas are well defined and would clearly benefit from these applications, but the remainder of field would likely not.

Low pH may not be the only issue on sandy knolls but correcting low pH may be foundational to improving productivity. Other issues could also be apparent as a nature of lighter soil textures (fertilizer burn, root feeding pests, nematodes).

Webber and Hoffman. 1967. Origin, Classification and Use of Ontario Soils Publication 51. Ontario Department of Agriculture and Food. 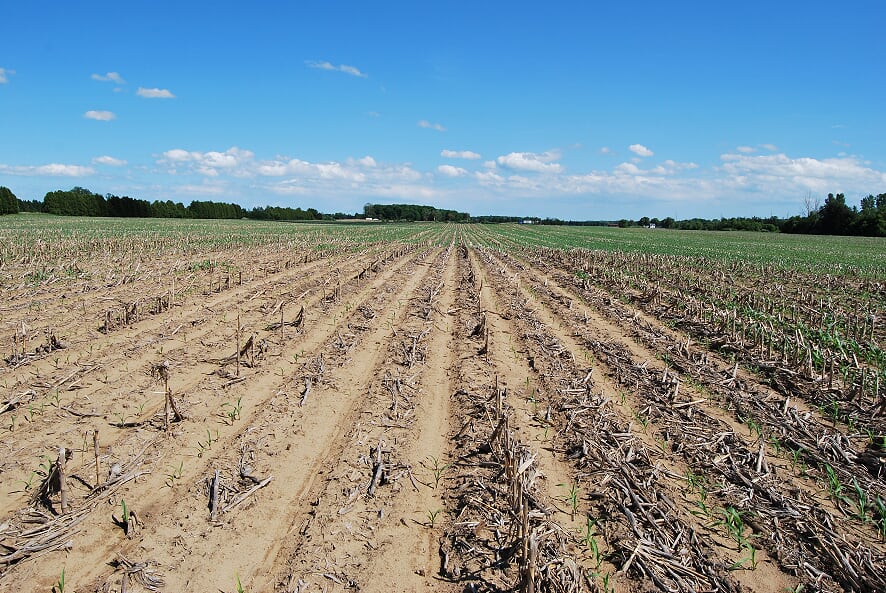