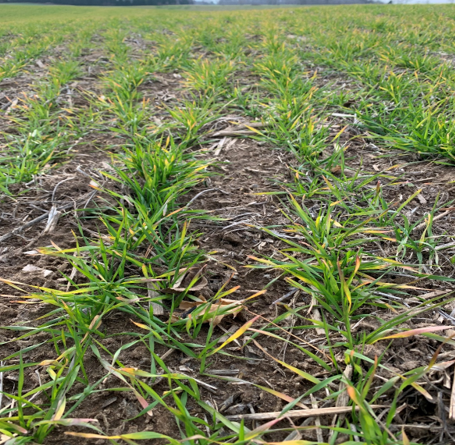 A cool, wet 2019 spring pushed soybean planting well into June for most of Ontario with some regions planting well into July. Although this was expected to cause a delay in winter wheat seeding, good conditions throughout September and October allowed for a timely soybean harvest and overall, wheat was seeded into excellent conditions. The exception was eastern Ontario, where harvest conditions delayed wheat seeding. Approximately 1,046,455 acres of winter wheat were seeded. The proportion of hard red wheat acres was slightly up at 8% of the acres. Soft white wheat acreage dropped from 4% to 3% and the proportion of soft red wheat acres remained the same at 89%. Prior to winter, most fields had established a deep root system and had tillered before winter, increasing the chances of winter survival.

With acreage up in many areas, most winter wheat came out of winter in excellent conditions with higher survival than normal. This is likely due to timely planting last fall.  Cereal rye forage and cover crops also came out of winter looking good. By the end of March wheat was starting to green up and was looking excellent. However, after the warm spell in March and early April, the weather turned cold again and growers in parts of eastern Ontario did see some population losses in April and May due to water or ice damage. Heaving was also observed in late-planted fields on heavy clay ground, particularly in southern Ontario. There were concerns that the cold temperatures in late April to early May would have a negative impact on yield; however, while fields did see some yellowing, most fields were not advanced enough to see any significant damage from below zero nighttime temperatures.

Fall weed control continued to show value this spring. 2019’s unseeded acres that did not have good fall weed control were under high weed pressure, particularly from Canada fleabane and bluegrass species. Due to cold nighttime temperatures in April through to May, it was difficult to make early herbicide applications due to the concerns for reduced efficacy; however, most annual weeds were not a huge concern as they were not actively growing in the cool weather. Once the weather improved, herbicide applications continued, especially   where weed pressure was high.

Nitrogen and sulphur applications began during the first week of April with 80% of fields in southern Ontario receiving nitrogen by the middle of April. In eastern and northern Ontario about 50% of fields received an application by mid-April with most nitrogen and sulphur applications being wrapped up by the beginning of May. While some reported that as much as 50% of acres were intended for split nitrogen applications, many opted for a single nitrogen application once the weather turned cold and attention switched to corn and soybean planting. Fertility issues are also more apparent this spring. Wheat that received seed-placed phosphorous at planting appeared better than wheat that did not. Sulphur, nitrogen and manganese deficiencies were also obvious in these fields. Part of this may be due to cool temperatures reducing microbial activity slowing conversion of organic nitrogen (N) and sulfur (S) into crop-available forms.

By mid- to late May, cereal aphids were being found at high numbers in southwestern Ontario. The cereal aphid threshold of 12 to 15 aphids per stem prior to heading and 50 aphids per head in early heading stages was surpassed in some fields, requiring control. Once finished in winter wheat fields, aphids began moving into spring cereal fields as well. If you see signs of aphids, consider using the Cereal Aphid Manager App: http://www.agr.gc.ca/eng/scientific-collaboration-and-research-in-agriculture/agricultural-research-results/cereal-aphid-manager-mobile-app/?id=1521633279786. The app takes into consideration aphid thresholds, predator populations and the weather forecast to help determine the population growth of the aphids versus the feeding or parasitism rate of their natural enemies. Cereal leaf beetle (CLB) was reported at higher-than-normal levels in many locations once again this growing season. Similar to aphids, once finished feeding on winter wheat, CLB moved into spring cereals. Growers are reminded that one CLB adult, or larvae per stem, warrants control after the boot stage but prior to heading. If significant feeding is taking place on the flag leaf in the early heading stages, control of CLB is of benefit. CLB moved into several spring cereal fields, exceeding threshold levels and requiring control in many cases. For more information on controlling CLB refer to https://fieldcropnews.com/2016/05/stay-ahead-of-cereal-leaf-beetle/.

To keep everyone on their toes even more in 2020, armyworm was also reported in many winter and spring cereal fields. Armyworm pressure was reportedly higher in fields with other grasses present, and they also fed on mixed forage stands. Very little head clipping was observed and thanks to diligent scouting not every field required control; however, there were fields that were well above thresholds. Samples were collected to see if parasitism by natural enemies is occurring in Ontario.

Disease pressure remained low for both winter and spring cereals throughout May, June and July. Regular scouting and low disease pressure resulted in few T1 and T2 fungicide applications in 2020. T3 applications began in the earliest planted winter wheat fields in southern Ontario around the first week of June. However, the risk for fusarium head blight and DON was low. Physiological flecking was reported more widely this year with observations around London, Haldimand and North Wellington.  The flecking appeared to be variety specific and research out of Washington state has shown some benefit to applying potassium chloride to prevent physiological flecking; however, a benefit has never been observed here in Ontario. Net blotch and crown rust did begin to show up in barley and oat fields requiring control, particularly in areas that experienced consistent rainfall events. Overall, disease levels were low throughout most of the growing season.

Hot, dry conditions through late June and early July advanced the wheat crop more quickly with a shortened grain fill period. Eroded knolls and sandy areas of fields were “burning up” and turning white prematurely. Harvest began in Essex county the first week of July with most of the province full swing into harvest by the third week of July.

Despite the challenges with insects and dry conditions, winter wheat yields exceeded expectations for many. The average yield for soft red wheat was 85 bu/ac (101% of Average Farm Yield (AFY)), hard red wheat was 84 bu/ac (103% of AFY) and soft white wheat was 87 bu/ac (100% of AFY).

The quality of the winter wheat crop was excellent with most of the crop grading 2 or better. Some fields were downgraded to 3 or 4 primarily due to low test weights. Protein was strong in hard red wheat varieties. There were many reports of black dust flying off the back of combines at harvest, this was due to black sooty mould developing on tillers that died prematurely (Figure 1). Overall, elevators and millers reported high falling numbers with very low fusarium/DON levels and were quite happy with the Ontario crop. Straw yields were strong with prices being lower compared to the previous year when straw demand was high. 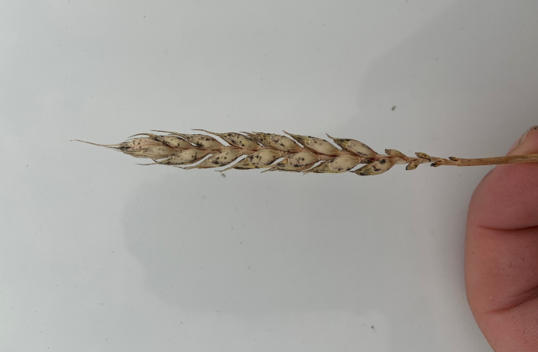 Spring cereal harvest started in late August and was prolonged from some due persistent rainfall events. Despite these August rains, hot and dry conditions during the grain fill period likely had a negative effect on yield and yields were down compared to 2019. Spring wheat had an average yield of 47 bu/ac (83% of AFY), mixed grain averaged 63 bu/ac (91% AFY), oats averaged 82 bu/ac (96% of AFY) and barley was 60 bu/ac (96% of AFY). There were reports of low-test weights in oats which appears to be variety specific; however, other quality parameters were ok.

The good spring conditions in March and early April provided an opportunity for growers to seed red clover with an estimated 30% of wheat fields being seeded. This is an increase from 2019. Once winter wheat was harvested many growers opted to seed a cover crop. Cover crop choices vary across the province with oats being one of the simplest and most effective choices, particularly for those looking for additional forage options. Where available, growers applied manure and digestates to their wheat stubble.

Many experienced optimal weather in September and October allowing for timely soybean and edible bean harvest. This provided an opportunity for many to get their winter cereals seeded in their optimum planting window and into ideal conditions. Those fields that were planted in September are well tillered with good root systems going into winter. There have been reports of fields looking yellow, red or purple (Figure 2). This is a result of the top growth photosynthesizing and making energy while the roots are unable to keep up. This is being observed where there has been heavy compaction, no starter fertilizer used, heavy soybean residue and where there are internal drainage issues. The impact on yield is expected to be minimal.  Approximately 1,081,000 acres of winter wheat were seeded.

Figure 2: A common sight in 2020, winter wheat fields with red, yellow or purple looking plants due to temperature fluctuations and restricted root growth.