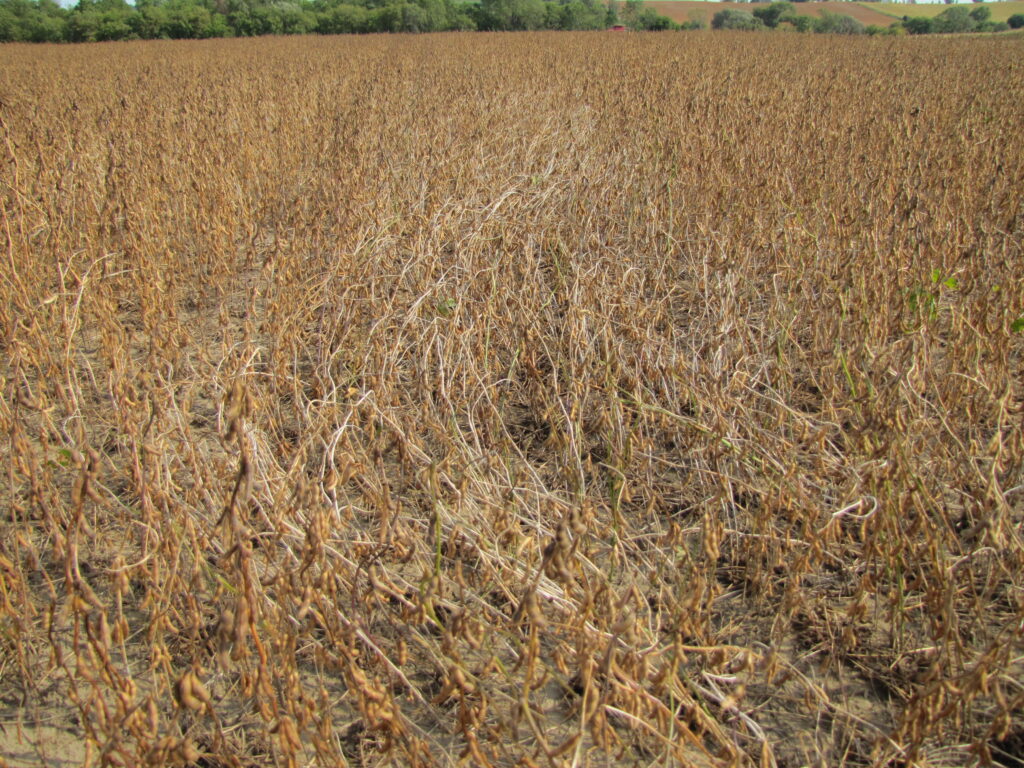 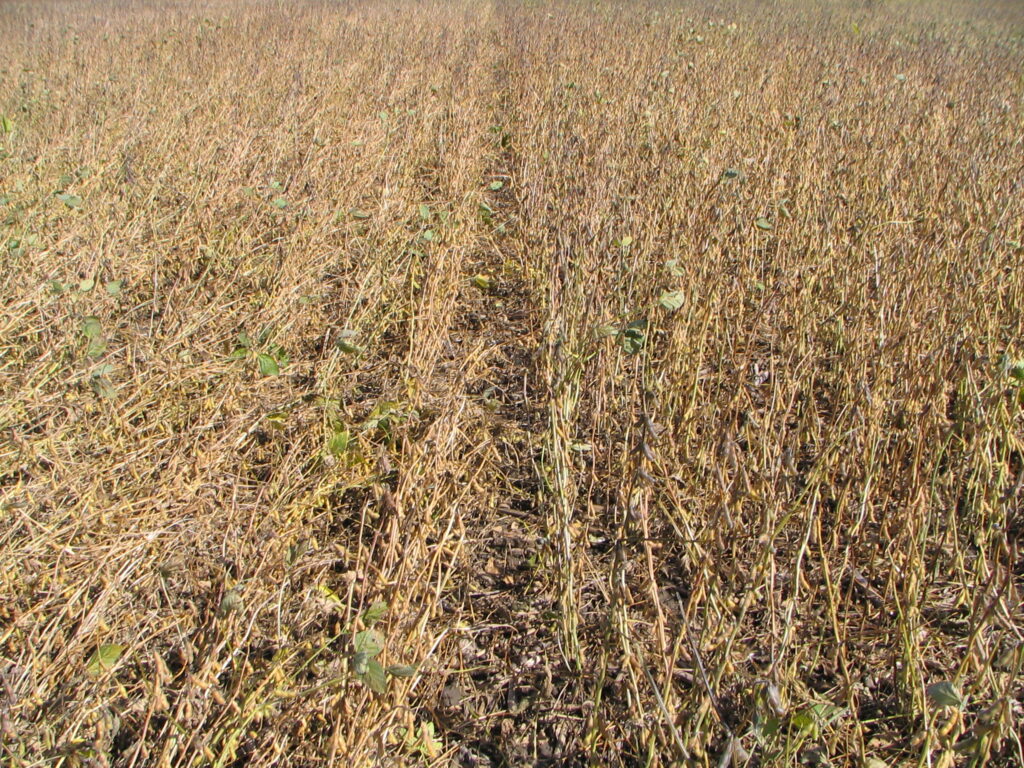 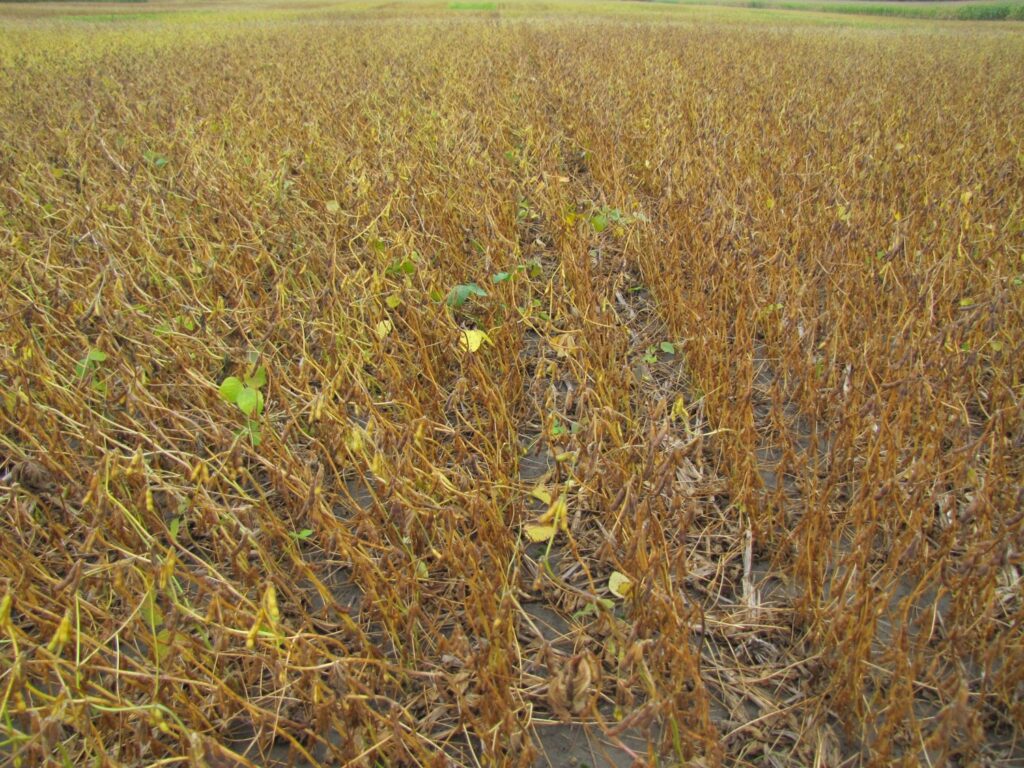 Soybean lodging (plants that fall over) can seriously impact yield. Fortunately, it’s often only small portions of a field that lodge. In rare cases whole fields will go down, which devastates yield potential. Light penetration into the canopy during key growth stages will be impeded by lodging, reducing a plant’s ability to produce seed. Lodging that occurs from R3 (beginning pod) to R5 (beginning seed) is the most detrimental. Lodging that occurs at later stages is largely a harvest problem. Diseases also proliferate in lodged plants, further reducing yield. White mould in particular proliferates in lodged plants. Lodging often occurs in the most productive areas of a field where high fertility and moist conditions are present. High yield contest winners that grow tall, lush beans with high pod numbers often deal with lodging. However, lodging may also be found in fields with low potassium levels.

In some US states (mostly south of Ohio), soybean stem borer is a significant cause of soybean lodging. Larval stages of this insect tunnel through the stem, eventually cutting off plants at the base. This is particularly a problem late in the growing season. Fortunately, no cases of this insect pest have been reported in Ontario.

The main causes for soybean lodging in Ontario are:

1. High plant populations. When populations are too high for the given environment it results in plants that are too tall. Plant to plant competition for light causes stem elongation which weakens the stem. The exact number of plants per acre that will result in lodging depends on soil type, variety, and growing conditions. For instance, clay soils where beans are physically shorter can sustain much higher populations compared to loamy soils. In Figure 2, 250 000 seeds/ac were enough to cause severe lodging on this loam soil compared to 200 000 seeds/ac where there was no lodging. It is also worth noting that in rare cases extremely low populations will result in lodging because each plant carries an excessive number of pods. A late season wind can topple these plants.

3. Excessive nitrogen fertility through manure application will greatly increase lodging in a wet year. Although soybeans respond well to reasonable amounts of manure, excessive nitrogen will cause lodging. Nitrogen early in the growing season promotes excessive vegetative growth but does not stimulate seed production.

How to minimize lodging

Some years lodging is almost inevitable, but careful management will greatly reduce losses in susceptible fields. Lodging scores are taken at the performance trials and reported at gosoy.ca. These scores, along with plant height information, should be used when picking varieties. Choosing a physically short variety with good lodging scores can essentially solve the issue in fields with a history of lodging. Early seeding will also result in shorter plants compared to seeding in the second half of May or early June. Early planting means cooler conditions during the vegetative stages, which reduces the length between the nodes, shortening plants. Seeding early also increases yield potential so there is little downside to this practice. Finally, the most important factor is to reduce seeding rates to no more than 150 000 plants per acre in areas prone to lodging. In very productive fields, a seeding rate of 130 000 is often sufficient.