The best yields in Ontario are usually obtained from corn planted in late April and the first half of May, as the crop is able to use the full growing season. Early planting also results in earlier maturity in the fall, reducing the risk of damage from an early fall frost or adverse weather at harvest. The influence of planting date on corn yield is illustrated in Table 1–10, Expected grain yield due to various planting dates. Most noteworthy is the rapid decline in yield for the shorter season areas compared to longer season areas as planting dates are delayed.

Depending on the total number of days required to plant the farm’s entire corn acreage, it is generally necessary to start planting corn before the optimum date. Producers wanting to plant corn significantly earlier than optimum dates (i.e., April 15–25) should consider that soil temperatures need to reach 10°C before germination and emergence will occur. The average daily temperature is estimated by taking a temperature measurement close to 11:30 a.m. using a 10 cm (4 in.) soil thermometer. Early planting of
a portion of the corn crop can be considered if average soil temperatures are at or above 10°C, the soil conditions are favourable and the weather forecast is predicting average to above-average temperatures. It is generally advised to pay less attention to soil temperature and to plant as soil moisture conditions permit after April 26 in areas receiving greater than 3,000 CHU-M1 or May 1 in areas <3,000 CHU-M1. In general, the loss of potential yield associated with planting 2–3 weeks before optimum planting date is less than the loss associated with planting 2–3 weeks after the optimum planting date.

Plant populations referred to in this section are the suggested final plant stands, see Table 1–11, Seed spacing to achieve various populations. Since not all seeds emerge, it is necessary to seed at slightly higher rates. When planting early in the season or when the soil is cold, a seeding rate 10% higher than the desired final stand is suggested. When soils are warmer, an adjustment of 5% is sufficient. 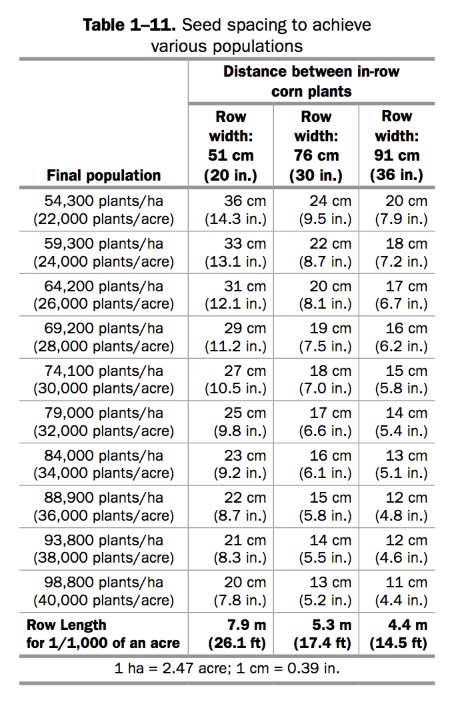 In Ontario, corn is commonly grown at plant populations of 69,200–88,900 plants/ha (28,000– 36,000 plants/acre). These populations maximize light interception and can produce good yields over a wide range of growing conditions without excessive lodging. In recent years, hybrids have been developed that tolerate higher plant densities without excessive lodging or barrenness. When old and new hybrids are grown side by side under very low plant populations, their yields are almost identical. Higher yield responses are obtained when newer hybrids are grown at higher densities. Much of the historical yield improvement has resulted from developing hybrids that excel under higher densities. Some of the most recent hybrids have economically optimum populations of 79,000–98,800 plants/ha (32,000–40,000 plants/acre). Refer to seed company data to fine-tune hybrid management and planting density decisions. On drought-susceptible fields where water availability is the yield-limiting factor, the yield potential may not cover the cost of higher seeding rates. In these situations, adjusting populations downward can achieve some savings. Higher populations are warranted as yield potential increases. One study indicated that for every 0.94 t/ha (15 bu/acre) increase in a field’s (or portion of a field’s) yield potential, economically optimal populations increased by 1,112 plants/ha (450 plants/acre).

In Ontario, it is common to aim for higher average final plant stands than that of the U.S. midwest. The most productive fields should be near the upper end of the plant population range for the hybrids being planted. In shorter-season areas of the province, where smaller-stature hybrids are grown, producers should consider even higher populations to maximize light interception and optimize yields. Yield increases from increased plant densities have generally been lowest in the longer-season regions of Ontario (over 3,200 CHU-M1 heat units). Corn silage plant populations are often promoted as needing to be higher (10%) than grain corn. Research from Cornell University disputes this, showing no advantage to having plant stands of more than 86,500 plants/ha (35,000 plants/acre) for any of the hybrids tested. The research predicted that as hybrid populations increased, silage digestibility declined. Optimum plant populations may be very hybrid specific due to the genetic diversity among silage hybrids.

The first rule of corn planting is to plant into moisture (25%–50% or near field capacity). However, a few other considerations allow for some fine-tuning of planting depth. Shallow planting of corn (less than 3 cm (1.2 in.) deep), even into moisture, may lead to less favourable positioning of the growing point and first nodal roots. This may lead to rootless corn syndrome in some cases and predisposes the seed to greater injury from herbicides. Coarse-textured soils that dry rapidly at the surface will also be more prone to poor root establishment with shallow plantings.

In contrast, planting deeper at 5.7–8.2 cm (2.25–3.25 in.), especially when soils are cold early in the planting season, can delay emergence compared to planting at depths of 4–5 cm (1.6–2.0 in.). Delayed emergence can lead to increased risk of insect feeding or seedling diseases. As the planting season progresses and as soils warm and dry, ensure that the corn seed is placed firmly into moisture and planted at a target depth of 5 cm (2 in.). When planting is extended and soils warm, planting at depths of 7.5 cm (3 in.) in order to find moisture is often less risky than planting shallower and hoping for rain. 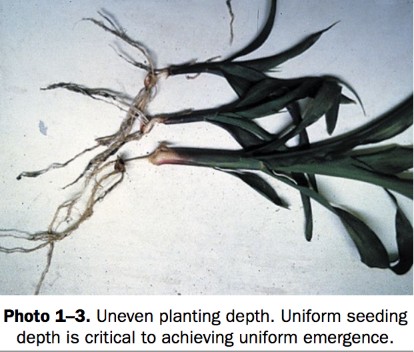 Physiologically speaking, a corn seed that is placed into moisture at 3.8 cm (1.5 in.) deep will have excellent performance. The challenge comes when a corn planter is set to deliver seeds at 3.8 cm deep and due to planter row-unit bounce or some areas of the field with a seedbed that is rough, uneven or compacted will have some seed planted too shallow for good emergence. Therefore, it is often advisable to set the planter slightly deeper to avoid having any seeds that are less than 3.8 cm (1.5 in.)
deep.

Planting depth can be evaluated well into the growing season by carefully excavating the plant, removing the nodal roots, and identifying the mesocotyl. The mesocotyl is generally a white, mostly hairless structure that runs from the seed to the crown. Measuring the length of the mesocotyl and adding 1.9 cm (0.75 in.) results in an accurate assessment of planting depth.

This is an excerpt of the planting section from the corn chapter of Ontario Ministry of Agriculture, Food and Rural Affair’s “Agronomy Guide for Field Crops – Publication 811”. The whole corn chapter can be viewed as PDF here. All chapters are online, and can be viewed by searching the internet for “Agronomy Guide for Field Crops – Publication 811”. Special thanks to Andrew Priest, OMAFRA summer student, for producing these Field Crop News excerpts.