To successfully produce corn in Ontario, it is important to consider factors such as soil texture and crop rotation. Factors that will influence tillage options include risk of erosion, availability of equipment and labour and impact on soil health.  Soils in Ontario are usually saturated in early spring, and quick dry-down is necessary to ensure timely corn planting. Appropriate use of tillage can increase spring soil dry-down rates by loosening soil. This improves drainage and/or reduces residue cover, which increases rates of soil water evaporation.

In Ontario, course-textured soils (e.g., sand, loamy or sandy loams) that have good internal drainage characteristics show little yield response to tillage (drainage classification: rapid or well). Even for crops that leave large amounts of residue cover, such as grain corn or cereals, there is often little response to tillage.  On heavy-textured soils with relatively slow internal drainage, tillage can significantly increase the rate of soil drying and warming. This increases the possibility for timely planting and rapid uniform emergence. Table 1–1, Comparison of two tillage systems on grain corn yield provides a summary of Ontario tillage research for corn, following either grain corn or cereals grouped according to soil texture. Tillage increased yield about 70% of the time following cereals, grain corn or soybeans on the medium- and fine-textured sites with an average 5%–7% yield increase.

A good crop rotation can replace a significant amount of tillage. Table 1–1 summarizes Ontario tillage research, conducted on medium- and fine-textured soils, grouped by previous crop. Generally, there is: 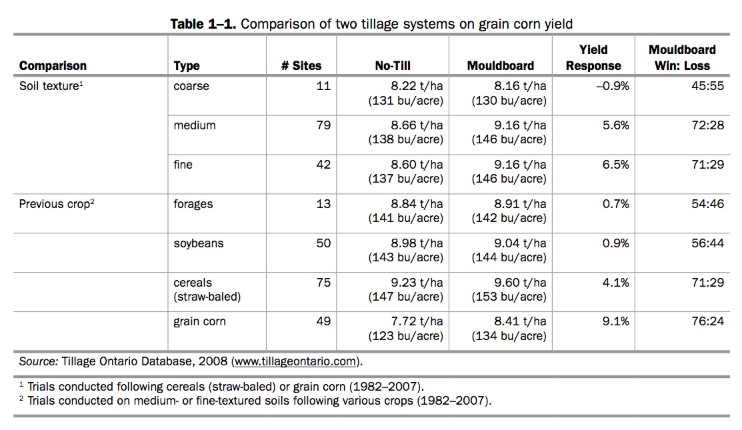 Other Reasons for Tillage

There are other reasons to perform tillage for corn production in addition to increasing soil dry-down rates:

Conventional tillage for corn in Ontario consists of fall mouldboard plowing followed in spring by secondary tillage, usually with a field cultivator or tandem disc. Most mouldboard plowing is targeted to an operating depth of 15 cm (6 in.); plowing deeper often results in unwanted mixing of subsoil into the seedbed. The more uniform and level a field is left after fall plowing, the greater the opportunities to reduce secondary tillage costs and improve planter performance. The lack of surface residue in conventional tillage exposes fields to greater erosion risks from water and wind. On complex slopes, tillage can be responsible for causing large quantities of topsoil to move to lower slope positions.

The chisel plow, disc-ripper and discs (either tandem or offset) have been the most widely adopted fall mulch tillage tools in Ontario. Tandem and offset discs are also used extensively in some areas. Tillage research trials conducted across Ontario over the past 20 years have generally shown that disking often resulted in more favourable soil conditions and higher corn yields than chisel plowing. Table 1–2, Impact of fall tillage systems on grain corn yield summarizes the corn yield data from these sites.

Chisel plowing with twisted shovel teeth may leave the soil quite ridged. This can lead to extra costs in secondary tillage (more passes), uneven seedbeds and occasionally excessive soil drying. Using sweep teeth on all or part of the chisel plow overcomes some of these problems. Adding a levelling bar or harrows to the rear of the chisel plow, or timely secondary tillage in the spring can also avoid this. The same approach should be considered with any fall mulch tillage operation.  Leaving the soil surface level in the fall allows for single-pass corn planting (no secondary tillage) to become a viable option in the spring. This is a good technique for reducing tillage costs and improving soil structure.  Soil surfaces are often left too rough in the fall so that multiple passes of spring tillage are required to make the field fit for planting.

Vertical tillage is used to reduce any pushing or smearing action that may be caused by tillage tools that engage the ground in the horizontal plane.  Many vertical tillage tools are designed to break apart residue into more manageable pieces and distribute crop residue, while causing some soil fracturing and mixing of soil with residue at the surface. See photo 1–1. Classic vertical tillage tools include a range of implements from shanks (parabolic or straight) that generally are without sweeps or wings, to straight or wavy coulters that run parallel to the direction of travel. In reality, quite a number of tillage tools embrace the concept of “vertical” tillage but have employed shallow concavity discs, low profile sweeps and extensive harrows to provide some additional soil disturbance, while attempting to remain true to the idea of tillage without significant inversion and soil smearing. 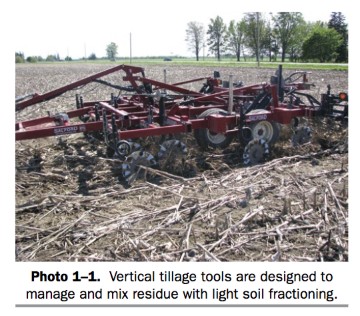 The most effective uses of vertical tillage tools for corn production fall into three categories:

2) Single pass residue management and seedbed preparation for corn in lower residue situations (e.g., after soybeans or winter wheat where straw is removed).

3) Residue management and shallow tillage in corn-after-corn rotations where vertical tillage may occur both in the fall and then again in the spring.

The best practice for reducing erosion and input costs is to eliminate fall tillage. Producers working on fine-textured soils where crop residues are high following corn, wheat or other crops may be apprehensive about leaving soils untouched in the fall. However, following soybeans, there is little justification for doing fall tillage on most fields in Ontario. Table 1–2, Impact of fall tillages on grain corn yield, illustrates that even on finely textured soils, spring tillage alone (two passes of a field cultivator) was generally sufficient when corn followed soybeans in the rotation. Other demonstration trials established on medium- and coarse-textured soils have shown the same results. Producer experience with spring mulch tillage systems has shown that working undisturbed soils in the spring obtained better results when using high-clearance tines, narrow teeth and/or when packers or rollers were used in conjunction with the field cultivator.

Performing fall tillage confined to narrow zones that correspond to next year’s corn rows has received considerable attention in the past few years. The strips of soil are loosened, generally off-set from the previous row, cleared of residue and often somewhat elevated, while leaving the rest of the field covered with protective crop residue. The next spring, the strips are drier, less dense and more suited to “no-till” planting.

Table 1–3, Fall strip-tillage for corn after winter wheat (straw removed), summarizes Ontario research comparing a trans-till zone tillage tool to conventional and no-till systems in winter wheat stubble. These data indicate that on fine-textured soils, strip-tillage in the fall generally produced higher yields than no-till systems. Only at the Wyoming, ON location did fall strip till yields equal those obtained with the conventional mouldboard system. Subsequent research has supported the observations shown in Table 1–3, that on fine-textured soils following wheat, fall strip-tillage generally resulted in higher corn yields than no-till and equal yields to those of conventional tillage systems. Research results have not consistently shown a yield advantage for fall strip-tillage systems over no-till on medium-textured soils or when following soybeans. 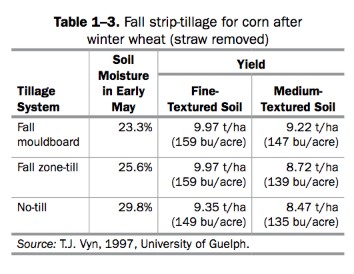 Early spring moisture measurements on the same tillage plots generally showed that fall strip-tilled zones were consistently drier in early May compared to the undisturbed no-till plots (Table 1–3). Yield responses in side-by-side trials have not always indicated a benefit to fall strip-tillage, but producers with large acreage, poorly draining soils or high surface residues may gain a consistent benefit from strip-tillage in terms of planting timeliness, emergence uniformity and early corn growth. Performing secondary spring strip-tillage in fall strip-tillage zones has increased yields in instances where fall strip-tillage yields are less than those in conventional tillage systems.

From a soil conservation perspective, if implemented up and down the slope, spring strip-tillage also offers the advantage of eliminating the presence of fall strips that can potentially funnel water and be susceptible to erosion. Global Positioning Systems (GPS) can further add to the soil erosion controlling benefits of strip tillage (fall or spring) if the strips run on the contour of sloping fields. 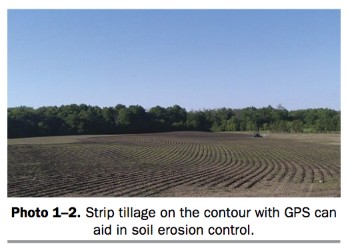 Deep tillage has increased due to heavier axle loads of farm machinery and the general concern that soils have become more compacted. The main benefit of using deep tillage is the elimination of compacted sub-soil layers and/or tillage pans.  Deep tillage will promote rapid and deep root growth and improve drainage. However, in Ontario, sub-soils that loosened using deep tillage are often easily re-compacted by wheel traffic. Moreover, it is possible that deep-tilled soils receiving wheel traffic will end up with poorer drainage and less favourable root growth.  This occurs because deep tillage often destroys the natural pores created by worms or previous crop roots.

In Ontario, use of the disk ripper to perform deep, 30–35 cm (12–14 in.), tillage has increased significantly. Table 1–4, Grain corn yield response to three tillage systems summarizes the results of a study that evaluated corn yield response to deep tillage using a disk ripper in medium-textured soils. On these productive soils with little evidence of severe subsoil compaction, there was little yield advantage and no economic benefit over a fall strip-tillage system where soils were tilled at about half the depth. Following wheat, both the disk ripper and fall strip-tillage systems produced yields that were 5% higher than no-till, but all of the yield response from tillage could be obtained using a fall strip-tillage system with a tillage depth of about half that of the disk ripper. Some producers have claimed benefits from deep tillage on areas with poor drainage or severe soil compaction (e.g., headlands). The need for deep tillage in Ontario is often only associated with fields or areas of fields with severe drainage limitations or soil compaction. 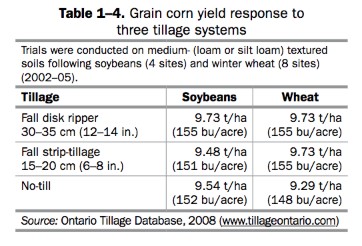 The strip-tillage system has also been presented as an opportunity for reducing compaction and/or improving drainage by conducting deep tillage. In some cases, it has been suggested to till as deep as 30–35 cm (12–14 in.). Researchers tested deep in-row ripping at sites near Granton and Ridgetown. Table 1–5, Effects of tillage systems on corn yields following winter wheat, illustrates that deep loosening either provided no yield benefit or not enough to pay for the cost of the deep tillage operation. The advantage of using a strip-tillage system to perform deep tillage is that wheel traffic does not occur on the deep tilled strips until the next harvest. This allows extra time for the soil to stabilize before it is exposed to wheel traffic again. 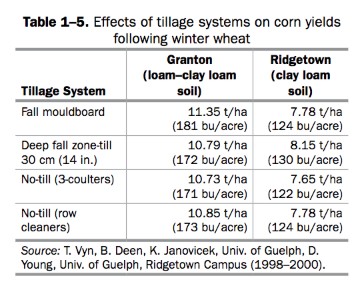 This is an excerpt of the tillage section from the corn chapter of Ontario Ministry of Agriculture, Food and Rural Affair’s “Agronomy Guide for Field Crops – Publication 811”. The whole corn chapter can be viewed as PDF here. All chapters are online, and can be viewed by searching the internet for “Agronomy Guide for Field Crops – Publication 811”. Special thanks to Andrew Priest, OMAFRA summer student, for producing these Field Crop News excerpts.