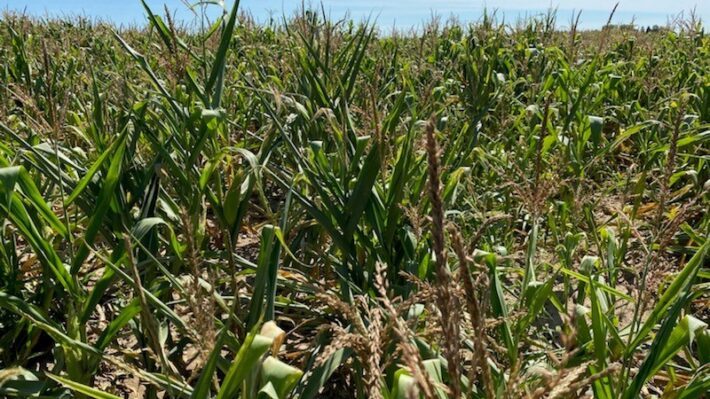 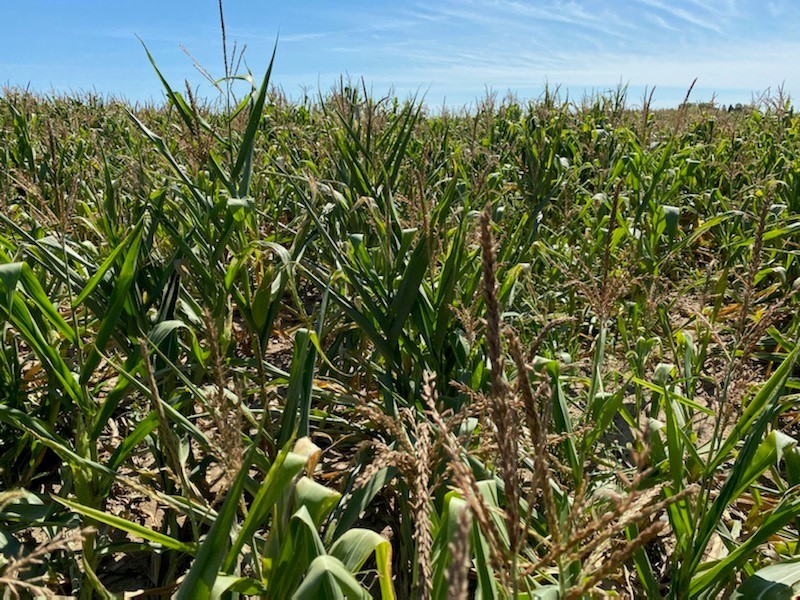 Corn rootworm (CRW) is a serious pest of continuous corn in Ontario. CRW larvae are the main concern, as they clip roots and inhibit root growth, resulting in poor nutrient and water uptake in the plant. Significant yield loss occurs before these symptoms are even noticed. For every node of roots clipped, there is a 15 to 18% yield loss. Additional crop loss occurs when portions of the field lodge due to this root clipping, making harvest difficult to impossible.

There are two species of CRW in Ontario. Western corn rootworm adults are yellow with three wavy black stripes on their wings, while northern corn rootworm beetles are green (Figure 1). The adults emerge from the soil in mid summer and are attractive to corn when in the fresh silk stage, feeding on pollen, silk and leaves. Once their native field is advanced, they move to nearby later planted corn fields. In areas where most of the landscape is planted to corn, populations thrive, flying from field to field to feed and lay eggs. So resistant populations are often shared among neighbouring fields.

The majority of adults prefer to lay their eggs in corn fields, hence why continuous corn production increases rootworm populations. If these same fields rely solely on Bt hybrids for rootworm management, they are at increased risk of resistance developing. If corn is not planted into the same field the following year, the rootworm larvae starve and populations crash.

The extensive reports of injury on pyramid Bt rootworm (Bt-RW) hybrids in several Ontario counties in 2020 suggests that cross resistance to multiple Bt rootworm proteins has developed under continuous corn production practices here (Figure 2). These observations are very similar to what US growers experienced back in 2013 before widespread cross resistance occurred.

Bt resistance will remain in the CRW population from now on. In high risk areas of continuous corn production where repeated use of Bt-RW hybrids is prevalent, measures need to be taken to reduce the risk of widespread resistance.

Crop rotation out of corn in the high-risk areas for at least one, preferably two years, is the most effective mitigation strategy as there will be fewer fields for the resistant adults to lay eggs in and their offspring to survive in the following year. Any non-corn crop can be considered. For livestock producers, viable alternatives to silage, grain and high moisture corn exist. These alternative options are discussed in detail further in other articles within this Crop Talk edition. Always consult your livestock nutritionist and agronomist before deciding what direction to take.

If rotation away from corn cannot happen in 2021, make efforts to do so in 2022. Land swapping with cash croppers who follow a three-year rotation is also an option if their field did not have corn the previous year; CRW won’t be present in those fields. If you must plant corn, the next best option is to plant above ground only Bt hybrids (eg. for European corn borer or western bean cutworm only) that don’t contain Bt-RW proteins. Use a soil applied or high rate insecticide seed treatment for root protection, if planting into a continuous corn field that is at high risk of rootworm injury.

Finally, if you must use a Bt-RW hybrid in 2021, ensure it is a pyramid hybrid (two Bt-RW proteins) but plan to monitor for any potential signs of resistance. Report any unexpected injury to your seed provider and OMAFRA.

Once the corn rootworm populations are lowered through crop rotation, we need to focus on more sustainable CRW management. Bt-RW hybrids should not be considered the primary solution for CRW management in continuous corn production going forward. They need to be used only in higher risk CRW years and in combination of other CRW management strategies including crop rotation.

Crop rotation out of corn at least once every four years will kill CRW populations and enable the first and potentially second year of corn in those fields to go without any CRW protection. Bt-RW hybrids can then be used in the third year of corn, when CRW risk is highest. This approach ensures that CRW are only being exposed to Bt-RW proteins one in four years, significantly reducing the risk of resistant individuals building up in the population and helps maintain the durability of Bt-RW hybrids. This strategy will only be successful if fields are rotated out of corn at least once every 4 years.