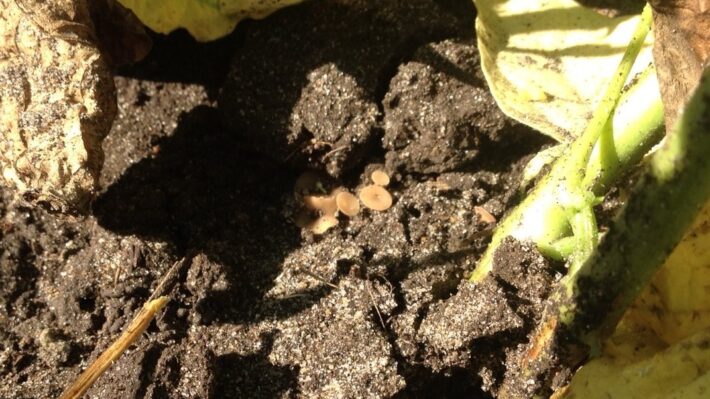 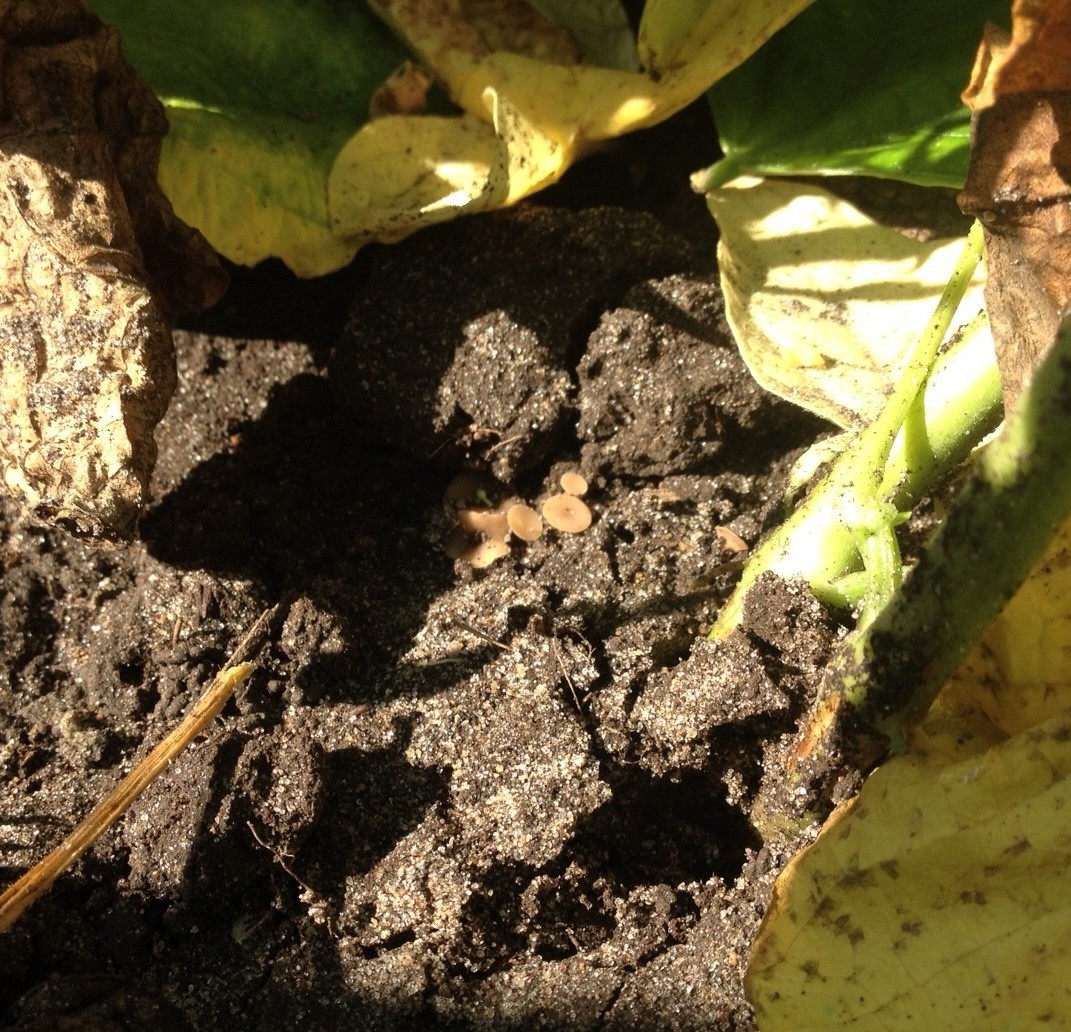 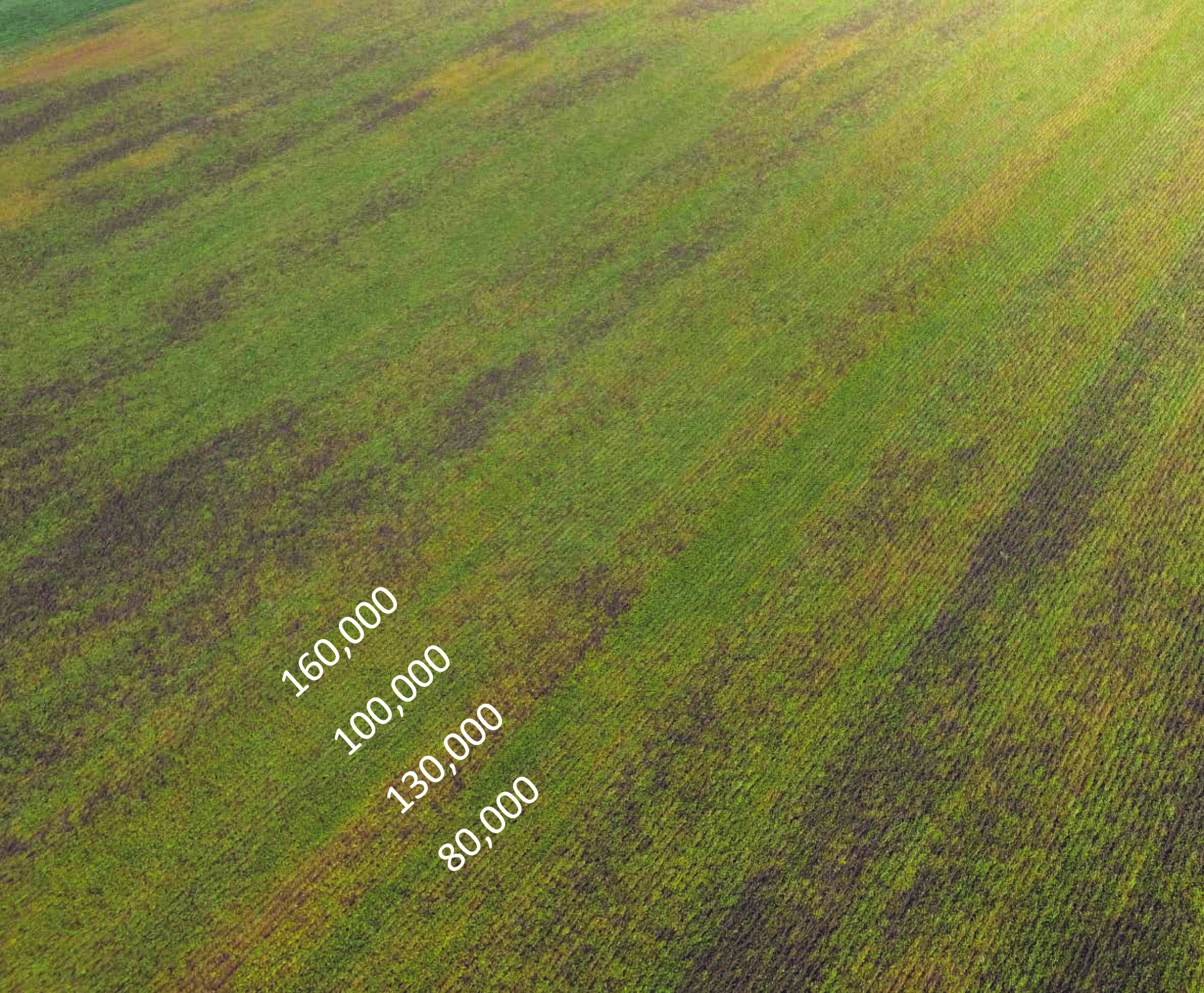 White mould can be one of the most devastating soybean diseases growers face. The extent of yield loss is largely dependent on the inoculum “load” of a field and the right weather occurring during soybean flowering. If the disease was previously a problem in a specific field the overwintering bodies (sclerotia) of the disease will be in the soil. If the weather is cool and wet (high relative humidity) spores are expelled to infect flowering soybean plants (Figure 1). That means all three factors must be in place to have a severe infestation in a soybean field; overwintering sclerotia in the soil, a soybean plant that is susceptible during flowering, and relatively cool, wet conditions during the infection period. The best way to drastically reduce white mould losses is to fight the disease on all three fronts. Growers that have implemented multiple strategies have been able limit the yield reductions that white mould has caused in the past.

Figure 1. Mushroom-like structures called apothecia will be produced by the overwintering sclerotia. Spores will then be ejected onto the soybean plant.

1. Reducing the inoculum “load” of sclerotia in the soil

A large percentage of sclerotia will naturally die if left on the soil surface. This means that fields with significant amounts of white mould should not be tilled after harvest. In addition, no-till soybean growers will also have less white mould because more of the sclerotia die off on the surface during the spring and early summer. No-till soybeans also have less vigorous growth, so the canopy is less rank, shorter in stature and maintains lower relative humidity.

The most effective way to reduce the inoculum load in a field is to grow fewer susceptible crops in the rotation. The more years between susceptible crops like soybeans, edible beans, and canola the less disease pressure there will be.

There are differences in variety susceptibility to white mould. There are multiple genes that provide some level of resistance and many soybean breeding programs are now attempting to include more of these traits. Seed companies often provide white mould ratings, but it must be noted that there is no standardized rating system. This means the scores can only be used as a general guide and are not always reliable. Unfortunately, good multi-year white mould data is simply not available for many varieties.

Soybeans planted very early (late April) sometimes have less white mould. This is largely because the plants are physically shorter than those planted in the middle of May, and the beans may finish flowering before late August rains. Foliar fungicides have developed into a major component in soybean best management practices. Their use has resulted in yield improvements of up to 12 bu/ac when 1 to 2 passes are applied during flowering when conditions favor mould infection. It is key to remember that these fungicides only suppress white mould and will not control it under severe conditions, but when used with other best management practices they can be a huge help.

It’s essential to keep the canopy and soil surface as dry as possible during the infection period. Reduced plant stands will achieve this goal and will also lower the amount of plant to plant transmission. Thinner stands will also decrease lodging. In two Michigan on-farm planting rate trials where white mould was present, lower seeding rates increased yields and profits (Table 1). All row widths including wide rows get white mould. Planting in 30 inch rows has been deemed a good practice for fields with a history of severe white mould pressure, especially in areas that have sufficient CHU’s or soil types to close the canopy by R3. Short season areas may be better to stick with 15-inch rows or they will give up too much yield, especially if planting is delayed. The overall plant population is what matters, not so much the row spacing. Fields with a history of high white mould pressure should aim for a final plant stand of approximately 80,000 to 100,000 plants per acre in 30-inch rows based on these Michigan trials.

The weather during flowering plays the biggest role in determining how bad white mould will get in an infected field. Although, there is no way to eradicate white mould, careful management will drastically reduce yield losses. 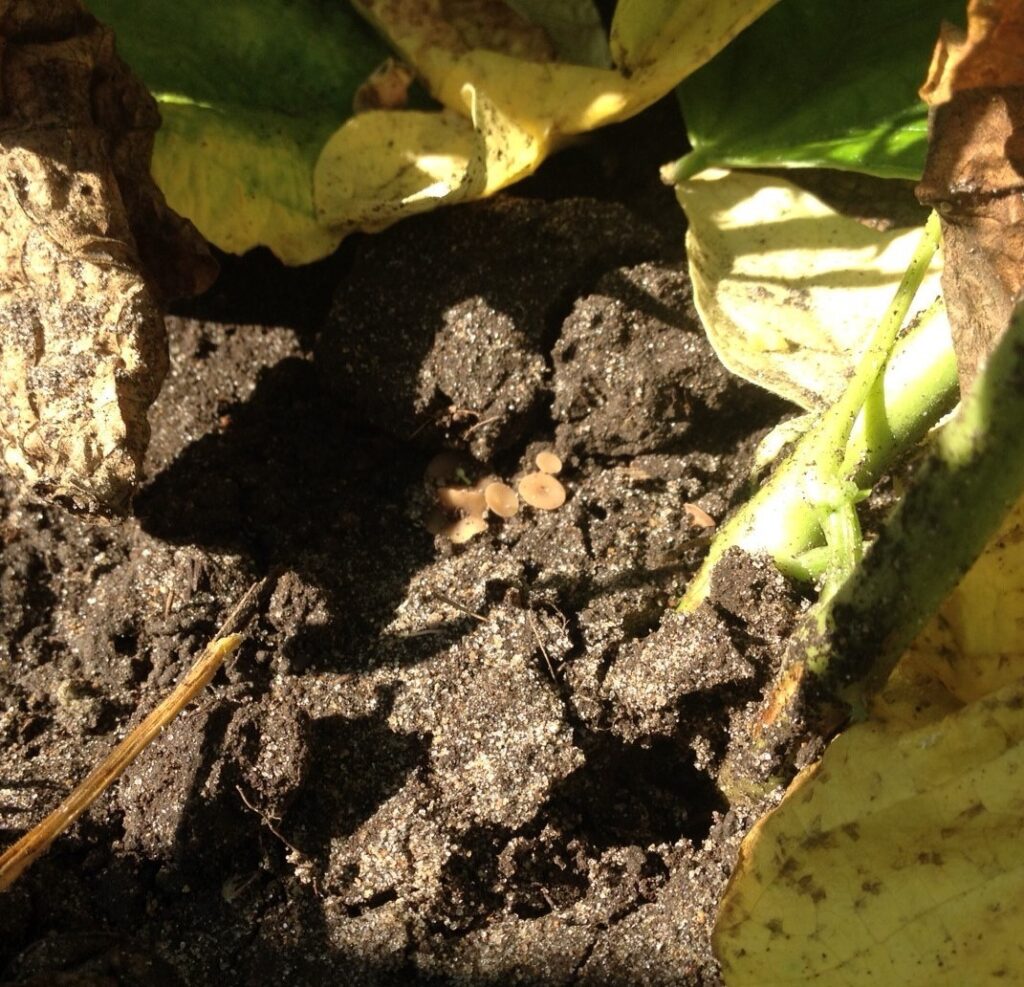