Uniform seeding depth is a critical factor in achieving uniform emergence. Uneven emergence affects crop performance, because competition from larger, early-emerging plants reduces the yield potential of smaller, later-emerging plants. Yields can be reduced by 5% when half the stand suffers from a 7-day delay in emergence and by 12% when half the population experiences a 2-week delay. Table 1–15, Corn yield response to plant spacing and emergence variability, shows the relative impact of emergence and in-row spacing variability on corn yield. In summary:

This study emphasized the fact that plants that are neighbouring a plant that is delayed in emergence do not compensate for the lower yield of the plant that is developmentally behind. 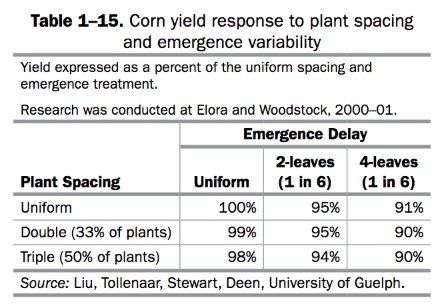 The relative yields shown in Table 1–15 indicate that when plants are less than perfectly spaced, those plants that have more space compensate for those that are given less space. Doubles are defined as two plants spaced about 3 cm (1.33 in.) apart situated next to a gap of about 38 cm (15 in.).  Triples are defined as three plants spaced 3 cm from each other next to a gap of 58 cm (23 in.).  A collection of research has further shown:

These results from other jurisdictions support Ontario research findings shown in Table 1–15. They suggest minimal yield impact of uneven plant spacing. Generally, within the range of plant spacing variability typically found in most Ontario corn fields that are at the target population, the reduction in yield potential due to plant stand variability is likely small. 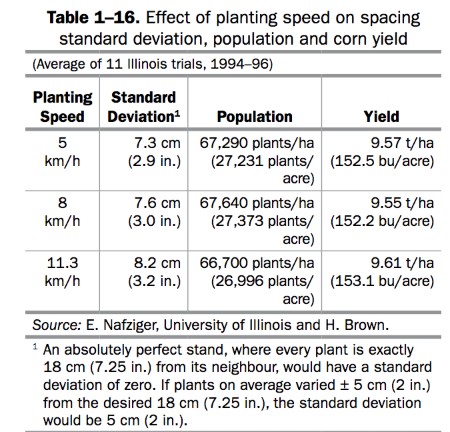 Uniformity and timing of emergence, along with achieving target populations, generally have a greater impact on corn yield than uniformity of corn plant spacing. Planter maintenance and choice of attachments (i.e., coulters and residue row cleaners) should focus on achieving consistent seed placement and the creation of in-row seedbed conditions that ensure rapid uniform emergence. It is important to ensure that the planter is operating level and that all discs, depth-gauging wheels and seed-firming devices are up to specifications, aligned and operating at the correct depth or pressure.

Pre-planting management may also play a critical role in emergence uniformity. If the field is left too uneven, if residue is bunched, or if surface compaction has not been uniformly alleviated, even the most carefully prepared corn planter may not be able to consistently place seed and create in-row seedbed conditions that ensure rapid uniform emergence.

Past research indicated that more northerly latitudes benefited the most from narrowing corn rows from the traditional 76–96 cm (30–38 in.) widths to 38–60 cm (15–24 in.) compared to mid-to-southern portions of the cornbelt. Most Ontario producers who converted to narrow-row production systems targeted 50 cm (20 in.) row spacing anticipating that the expected yield boost of 3%–8%, would cover the costs of converting planter and corn header. However, more recent studies conducted in Ontario by the University of Guelph and Pioneer Hi-Bred Ltd. have shown minimal yield advantage with 38 cm (15 in.) or 50 cm (20 in.) rows compared to 76 cm (30 in.) rows. The fundamental reason for moving to narrower rows is to enhance light interception. It appears that the total light interception once the canopy has fully developed is no greater in narrow rows than in wide rows. Any yield advantage experienced with narrow rows must come from earlier canopy closure and greater light interception in the late-June to early-July period.

Research has yet to find hybrids particularly suited for narrow rows. Increasing plant populations often resulted in comparable yield increases to traditional row widths. Yield improvements may be sporadic and the justification of equipment costs may depend on other factors such as use of the narrow row planter for other crops (e.g., dry edible beans), numbers of acres to be planted and costs of equipment conversions. There is also the increased risk for stalk rots in narrow row systems.

It is important when taking stand counts to observe the uniformity, plant size and distribution of the plants in the rows. How do the stand, plant size and distribution vary? Yields can be reduced by 2% if the stand has several 30–90 cm (12–36-in.) gaps. If the gaps are larger — 1.25–2 m (4–6 ft) — expect a 5%–6% reduction in yield when compared to a uniform stand. Yield reductions will be greater with more numerous and longer gaps between plants within the row.

The availability of early-maturing hybrids with good yield potential and the cost of replanting are important factors in the replant decision. Consider whether the herbicide program allows for a switch to soybeans. If not, is a reapplication of corn herbicides required? What is the condition and health of the remaining crop? Before replanting, determine whether the conditions that caused the problem in the first place still exist (soil conditions, disease, insects, herbicide injury). If an insect or disease problem was the culprit, factor in the cost of an insecticide and/or fungicide treatment. 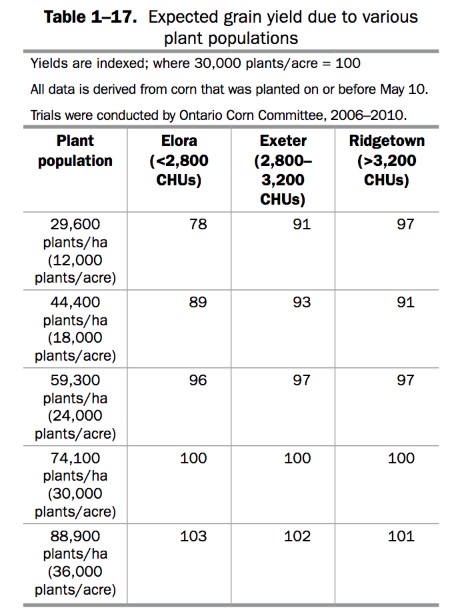 Ontario research data conducted and compiled by the Ontario Corn Committee was used to develop a Replant Decision Aid for producers to use when determining if replant is warranted based on their field situation and costs associated with replanting. This tool can be found at www.gocorn.net.

This is an excerpt of the planting section from the corn chapter of Ontario Ministry of Agriculture, Food and Rural Affair’s “Agronomy Guide for Field Crops – Publication 811”. The whole corn chapter can be viewed as PDF here. All chapters are online, and can be viewed by searching the internet for “Agronomy Guide for Field Crops – Publication 811”. Special thanks to Andrew Priest, OMAFRA summer student, for producing these Field Crop News excerpts.