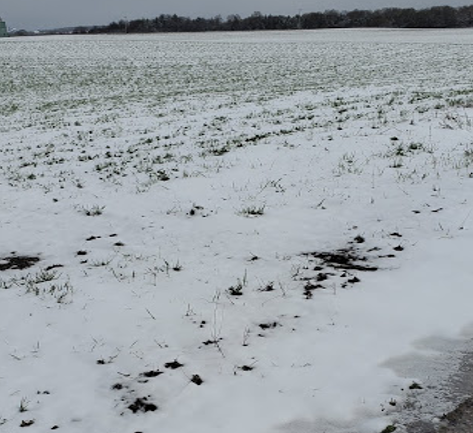 Temperatures have been warmer than average since early March, which has advanced crop development faster than normal. Forecasts predict a few days of cold weather (Figure 1.), snow and frost, followed by more normal temperatures for this time of year.

Dry field conditions have been excellent for spring manure applications. Over the past week, some precipitation occurred. According to Agriculture and Agri-Food Canada, the southwest and Algoma District received up to 13 mm between April 12-19. Central, eastern, and northeastern Ontario got up to 24 mm. The northwest had up to 29 mm.

Nitrogen application has occurred on 70-80% of winter wheat across the province. Grey, Bruce and Dufferin counties have experienced some thinner wheat stands due to snow mold and cold temperatures. Septoria and powdery mildew is being found on the lower part of the canopy in thick stands. Fields should continue to be monitored for movement of disease up the canopy.

Prior to stem elongation, cereals are very frost tolerant. They can generally tolerate temperatures as low as -11˚C for up to a few hours. After a cold event fields should be assessed after a few days of warm temperatures. At that point any injury will become more evident. Fields with the most advanced cereal crop should be checked first as they are most at risk. Assess low lying areas, especially if the nights were still with little to no wind.

Many hay fields and pastures have received a manure application or a spring nitrogen application.

Across the north, alfalfa has broken dormancy. It looks good at this stage, although its still too early to properly assess winter survival.

Frosts down to about -3˚C may cause white spots on alfalfa leaf margins, or a “shepherd’s crook” to form in the stem. If the stems straighten out in a few days, normal growth with resume. Harder frosts (-4˚C for at least four hours) may damage growing points and kill stems. Regrowth will begin from the crown, which could delay first cut.

For new seedings, alfalfa generally has good frost tolerance until the second trifoliate stage. Check the stand 3-5 days after a frost. If at least one set of leaves is still green, the plant should recover. If the plant is wilted all the way down to the soil, and the crown has not finished development, it likely won’t survive. Reseeding may be required if less than 15-20 plants/ft2 survive.

Winter canola has received nitrogen applications. If the crop is flowering when a frost occurs, the flowers may abort. At temperatures above –3°C there should be no economic damage, and the variety Mercedes showed good frost tolerance at these temperatures last year. Extended periods of temperatures of -4°C and below may damage buds or cause stems to crack. Expect to see canola droop over when conditions are cold and stand back up with warm weather.

Spring canola can germinate at 2-3˚C, but for fast emergence soil temperatures of at least 5˚C are required. Avoid seeding when there is frost in the forecast. Plants in the cotyledon stage are more frost sensitive than plants at the 3 or 4-leaf stage. Canola grown on muck soils tend to be more sensitive to frost. After a frost, wait 4-5 days to assess any damage. Check the growing point to see if it is green; if so, the plant is likely to recover.