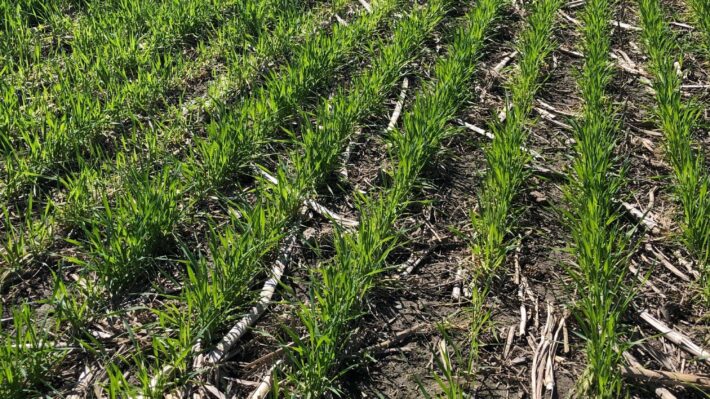 The first Exeter + Mt Forest (Virtual) Ag Business Breakfast Meeting of the season was held on Tuesday April 13th at 8:00am.

Spring has come early in Ontario. The growing degree days (GDDs) accumulated since March 1st for London total 260 compared to the 9-year average of 105. Similarly, GDDS in Goderich are at 250 and in Mt Forest are 221, compared to 9-year averages of 72 and 40, respectively. Up to March 31st, many regions were drier than normal for this time of year, so recent rains were welcomed.

Dandelion, chickweed and shepherd’s purse are actively growing, but few annual weeds have been observed. In some areas alfalfa seeding is complete, and some has emerged. Producers were busy applying manure while conditions were good and are getting this work done earlier than most years. Conditions over the past couple weeks have also been good for seeding spring cereals.

On average, winter wheat is more advanced than usual by this date. Fields that were seeded in September are at growth stage 30, while some later planted fields in the region are at growth stage 21. Most fields have strong plant populations. Around 75% of wheat acres have nitrogen applied. Those who are split-applying nitrogen applied the first pass a couple weeks ago, and many that are not split applying have all their nitrogen down.

Growth stage 30-32 is the application timing for plant growth regulators (PGRs). PGRs are primarily used on high fertility fields to manage lodging, and do not increase yield per se. They work best if applied when the wheat is actively growing, which may mean waiting for warmer temperatures. If PGRs are being tank mixed with herbicides or fungicides, ensure that weather conditions are appropriate for all products in the tank. Syngenta reps indicated that adding Moddus to a herbicide should not affect the potential for injury caused by the herbicide, and that tank mixing with herbicide and fungicide is supported provided label recommendations are followed for the tank mix partners. However, adding more in the tank does increase the risk for injury so if possible avoid a 3-way mix or increase water volumes to at least 20 gal/ac. Belchim reps indicated that in some cases leaf edge burn from surfactants has been observed when Manipulator is tank mixed with herbicides; ensure conditions are ideal for herbicide application. In some PGR trials, wheat variety was a factor in whether tank mixes led to leaf burn.

Powdery mildew has been observed in thick wheat canopies, as well as some Septoria. These diseases are not a big issue if they remain on the older leaf tissue but should be monitored as the crop advances.  Fungicide trials conducted by BASF in Ontario have shown no economic benefit to a fungicide prior to GS 31-32.

Sulphur rates for wheat were discussed, and most research and demonstrations to date indicate that 10 lbs of sulphate per acre is typically the most economic rate. Soils that are sandy or have low organic matter may respond to higher rates, e.g. 15 – 20 lbs./ac. Extremely high rates of 30 lbs./ac or more have not been shown to provide additional benefit, even on deficient soils or years when conditions are conducive to S deficiency. If producers are split-applying nitrogen, sulphur should be included in the first pass. Sulphur deficiency is most common in cold, wet conditions and have not been reported so far this year. It was noted that both ammonium thiosulphate (ATS) and ammonium sulphate (AMS) can be used, but thiosulphate must be converted to sulphate for plant uptake. The length of the delay for this conversion is variable across soil types and conditions.

Manganese (Mn) deficiency has been observed on some fields. Wheat will be yellow to almost white, somewhat similar to frost injury symptoms (see photos). Symptoms are brought on in dry conditions and tend to occur in high pH, sandy soils or muck soils. Manganese sulphate should be applied as soon as possible at 7 lb/ac in 53 gal of water with a spreader-sticker to correct the deficiency. 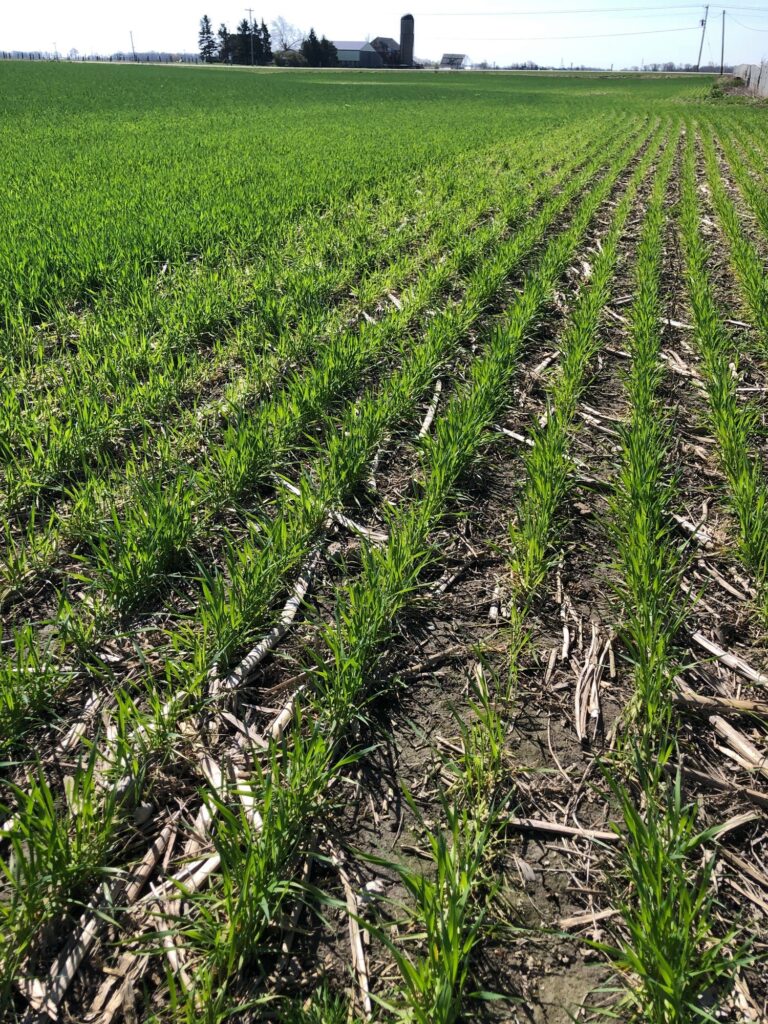 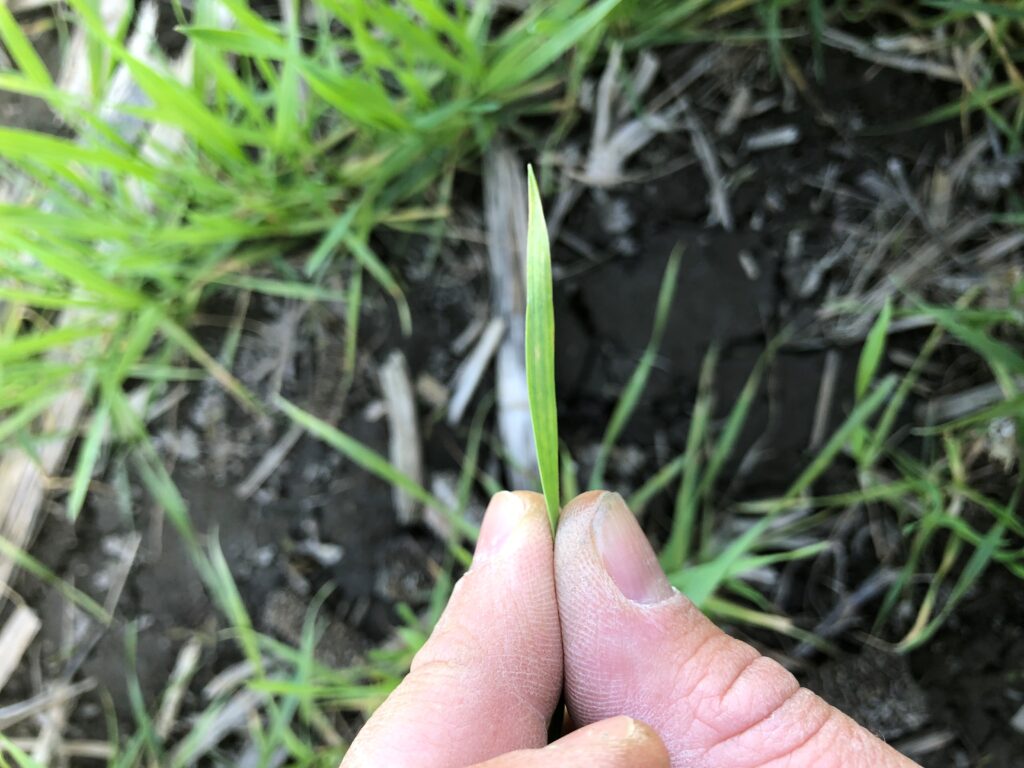 A few producers have been out planting a few acres to get seeding equipment ready, or to get the neighbours talking. While planting conditions were good, the weather is still variable. Corn and soybean planting may begin in earnest around April 20th, generally speaking. Most IP soybeans grown in these regions are shorter season so there is no rush to plant.  Some producers have been applying “burndown” herbicides, which could be a bit on the early side depending on rainfall and planting conditions over the coming weeks.

Based on follow-up comment after the meeting, some cover crop oats planted last season have survived the winter. Surviving plants will likely go to head, but the cold injury and therefore the maturity and yield potential will probably be variable. This is not something we have much experience with in Ontario.

Dennis Lange, Pulse Specialist with Manitoba Ag, was invited to provide an update. Soil temperatures were around 4°C on Monday but there was snow cover this morning. Soybean acres are estimated to reach 1.4 million acres in Manitoba this year, up from about 1 million last year. About 2% of acres are IP soybeans.  The average soybean yield in 2020 was 38 bu/ac, which was an improvement over 28 bu/ac in 2019. Yields typically range from 30-50 bu/ac.