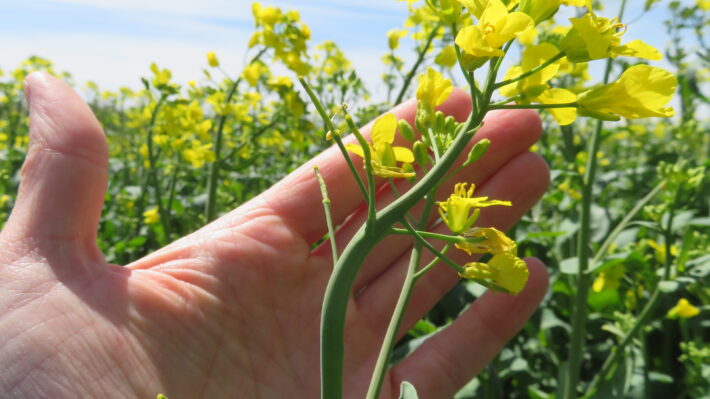 Ontario winter canola yields were very strong in 2020 giving us a good look at the incredible yield potential of the crop. Many producers reported yields over 3700 lb/ac and some watched their yield monitors jump over the 5000 lb/ac mark. The mild winter was likely a big part of that success, but Mother Nature did put the crop through an important test – late spring frost. This article outlines how the crop fared in 2020, and what to scout for after spring frost events.

During the last week of April, most winter canola growing regions were seeing temperatures above 15°C, and as high as 20°C in some areas. The canola was developing flower buds and elongating, advancing quickly towards first flower. May 8th to 13th was a much different story, however, and for a few days in a row the temperature fell below zero. In Harrow, the temperature dropped to -6°C on May 8th and stayed below zero for more than 24 hours. Top yielding fields in Blenheim also saw temperatures as low -4°C and spent many hours between zero and -3°C over a 5-day period. Other winter canola fields, such as those in Prince Edward and Perth Counties reached similar lows but for fewer total hours. 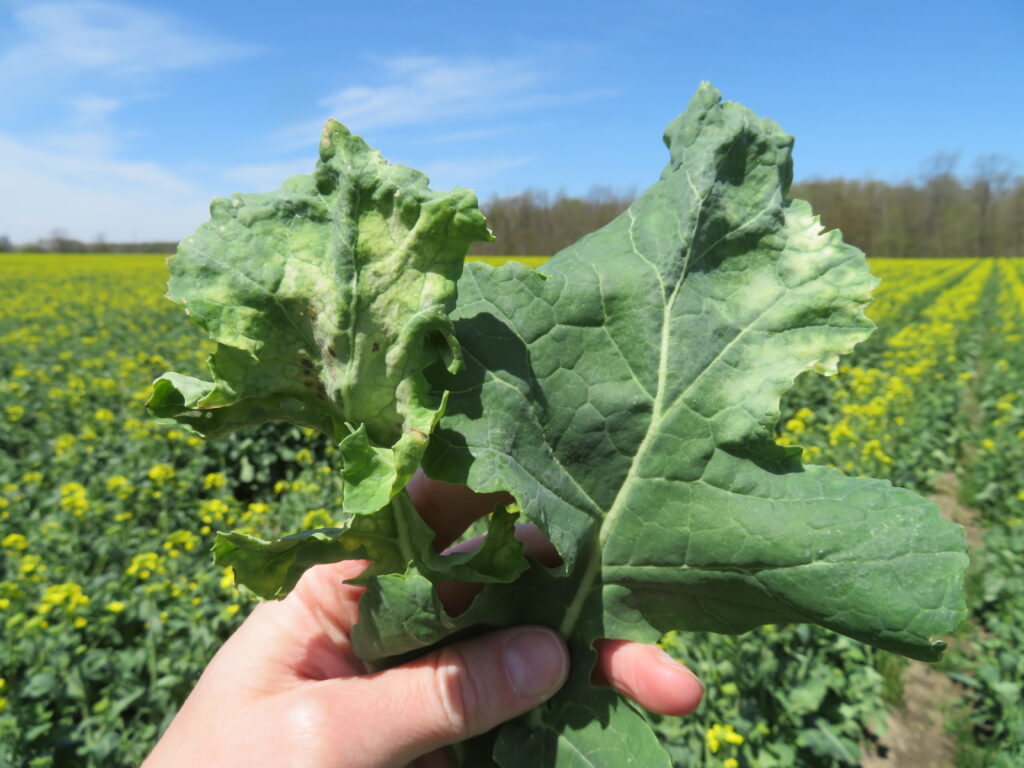 Figure 1. Frost injured canola leaves. This is not a major concern for yield loss if plants continue to grow, and reproductive structures are healthy. 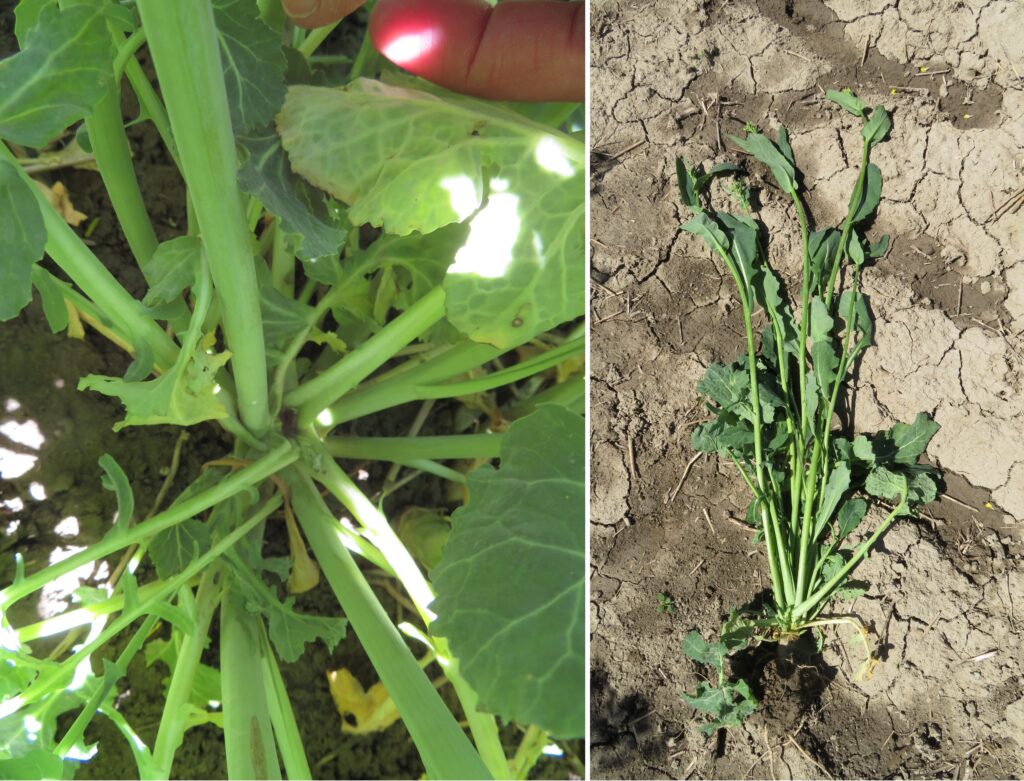 Figure 2. Main growing points/stems were killed by cold temperatures in the weeks prior to these photos being taken. The plants did not die but produced multiple new stems, each with a single bud cluster. This damage has caused some yield loss.

Reproductive structures are much more sensitive to extreme temperatures. Producers and seed companies have reported that in past attempts at winter canola production in Ontario (e.g. 1990’s), there were many examples of the canola dying or being severely damaged when frost occurred during flowering. Many fields were scouted for injury in May of 2020 and the impact of frost was relatively limited. Symptoms caused by cold temperatures during reproductive growth stages observed in 2020 include:

The fields that were most advanced in early May lost some buds, flowers and early pods but overall, the number of damaged reproductive structures was relatively few and did not result in significant yield loss. There are so many flowers in a canola field that losing a few is not a major concern. In addition, losses in early flowering stages occurring on the main stem may be compensated for with branches and flowers that come later. There were many fields in 2020 that were just about to flower when cold temperatures hit, and they simply sat still until warmer temperatures arrived and they were able to continue advancing through flowering. 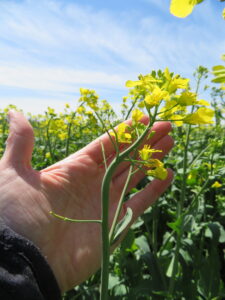 Figure 3. Bolted plants bend or droop over during cold temperatures, then stand up again as temperatures rise. This can be alarming but does not decrease yield if plants remain healthy. This picture was taken weeks later – some stems do not fully straighten. 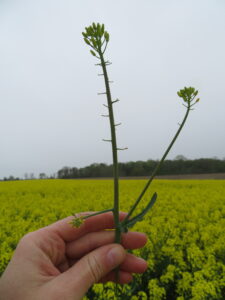 Figure 4. Open flowers and/or newly formed pods abort and fall off during frost events – note the pedicels (flower stems) along the main stem with no buds, flowers or pods attached indicating past injury. 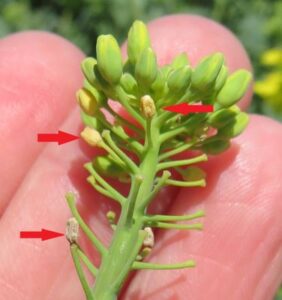 Figure 5. Aborted buds; unopened buds may abort but should be more tolerant of cold temperatures than opened flowers or new pods. 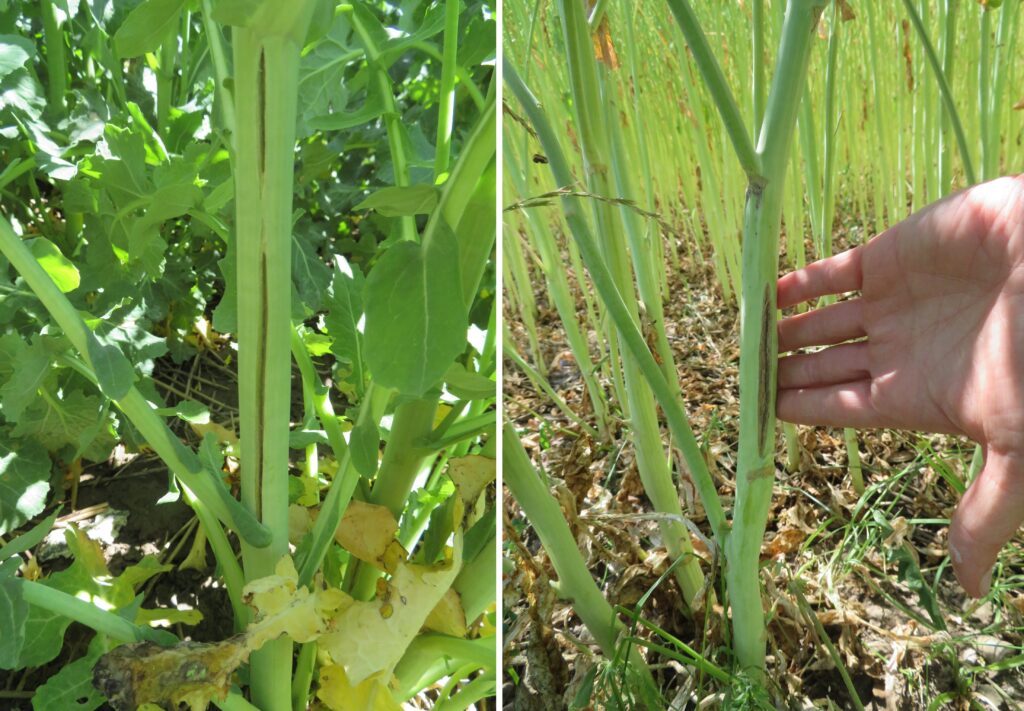 Cracked stems were observed in most fields that had bolted (stem elongation) prior to frost, but in 2020 only a very low percentage of plants were injured. One plant stem that had cracked open the full length of the stem was found after extensive scouting (Figure 7). Cracks can be an entry point for plant disease, but no major concerns were observed by producers, and in July stems did not look necrotic or diseased. 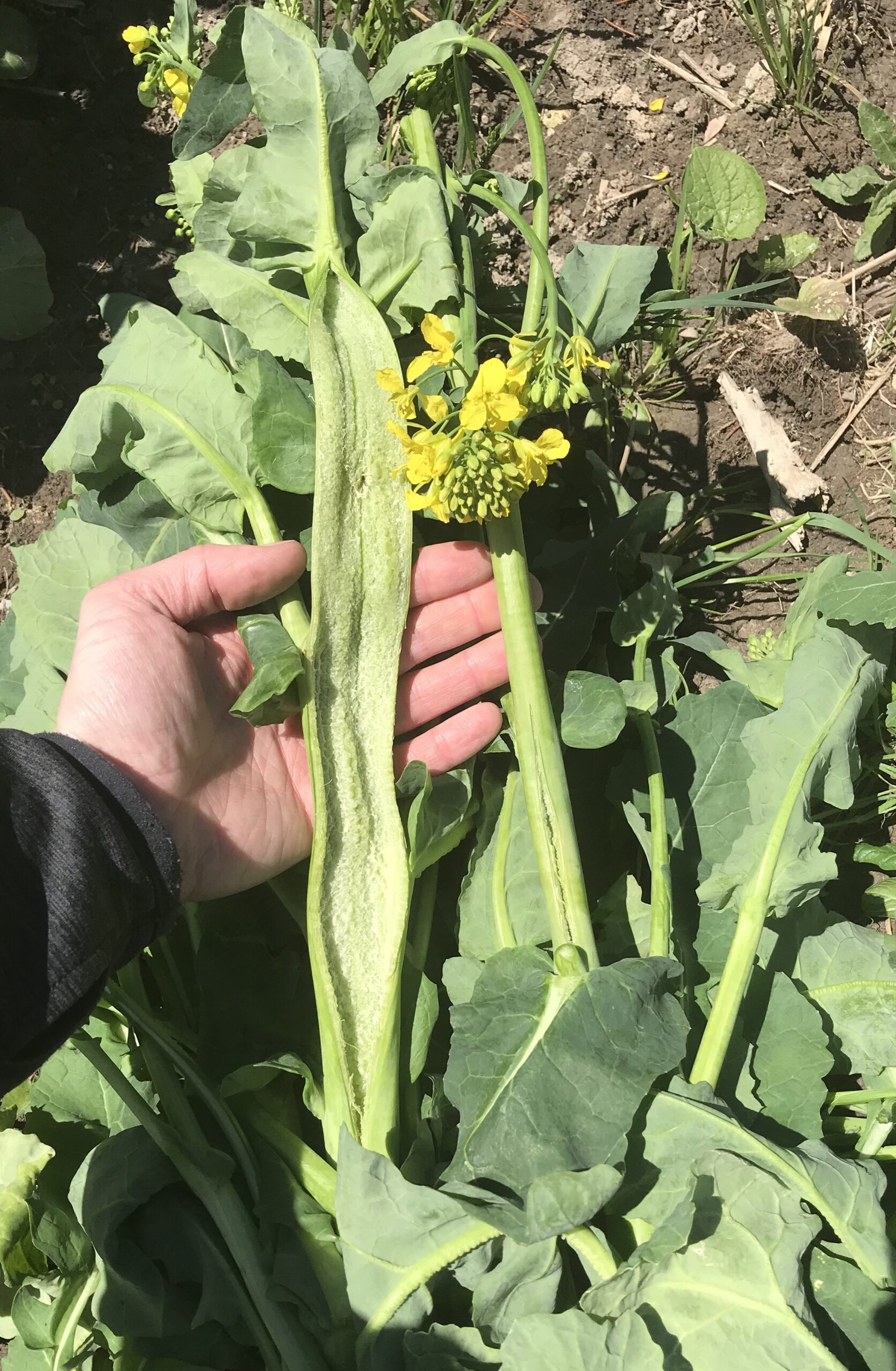 Figure 7. One plant found with the stem fully cracked open showing the potential for higher levels of frost damage.

The variety Mercedes appeared to have good tolerance to cold conditions in 2020, especially compared to stories about past experiences and older genetics grown in Ontario. Michael Stamm, winter canola breeder at Kansas State University, generally agrees, saying “part of the improved spring frost tolerance is that the genetics are better now.” He went on to say “Mercedes has always been an impressive hybrid and is very robust. I do not know of any hybrids that are more tolerant to freezing at flowering.” Stamm noted that sustained cold periods can be more injurious than short, repeated freeze events. Any freezing during reproductive stages causes some loss, but economic damage is dictated by how cold it gets. Stamm outlined the general temperature thresholds he has observed, saying “if we have a forecast for nighttime temperatures of 26 to 28°F (-2 to -3°C) at peak bloom I don’t lose sleep, but at 20°F (-6.5°C) look out!” Stamm also noted that cool temperatures can be beneficial to yield, because flowering canola can suffer in heat.

A steady warm-up in spring without temperature drops after the canola has bolted is the desired scenario, but it appears that Mercedes has passed the spring frost test of 2020. 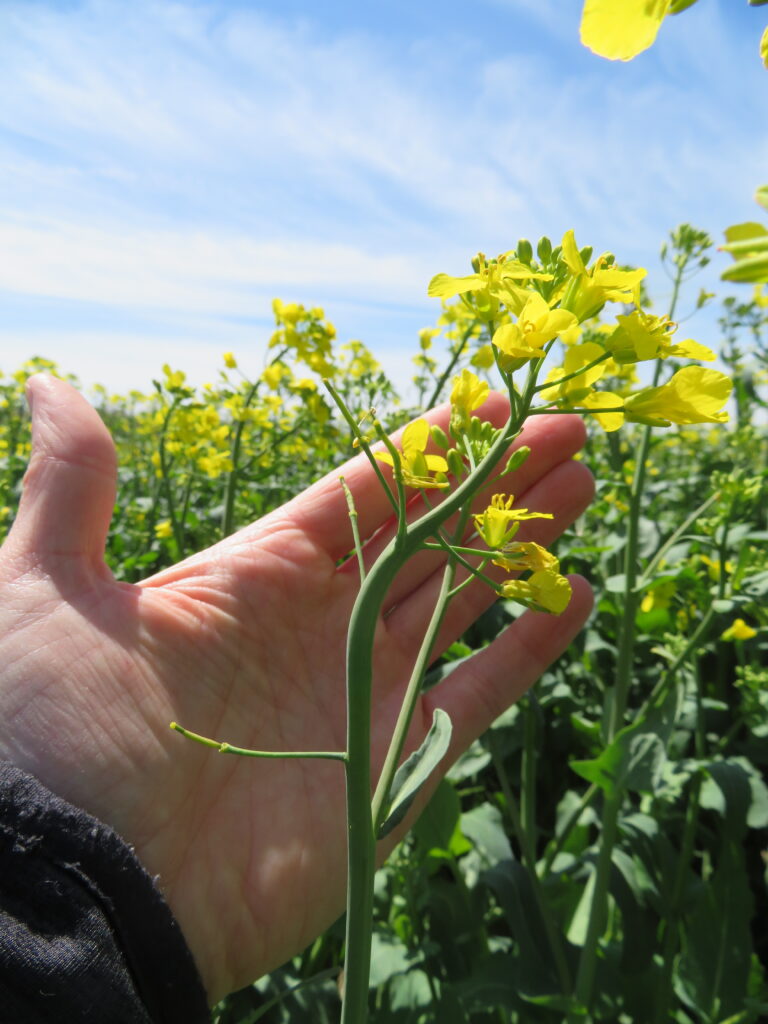