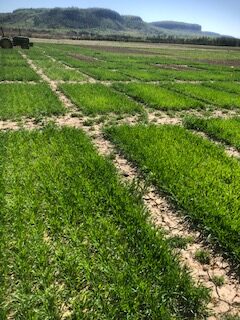 The third Northern Ag Breakfast Meeting was held on May 19th. The last meeting will be held at 8:30am EDT on Wednesday June 2nd. Horst Bohner, OMAFRA Soybean Specialist, will provide some updates on soybeans and answer questions. Thanks to everyone who joins in our discussions.

Ben Rosser, OMAFA Corn Specialist, shared updates from the first 2 years of a 3-year corn strip-till project. Interest in strip-till has increased over the last decade among producers that are interested in conservation tillage systems but don’t like vertical till or disking. The trials are designed to answer four of the most common questions producers have about strip-tillage and applying fertilizer in a strip-till system.

The project results from the first two years are well described in the article found HERE. A shorter summary is as follows:

So far there has been a strong response to fertilizer in the strip compared to broadcast applications at the same rate. The trial was conducted on low testing soils, and 60 lbs/ac of phosphate plus 60 lbs/ac of potassium were applied (approximately the corn removal rate), plus 30 lbs/ac of actual nitrogen on the planter. In the strip-till system a 7 bu/ac yield increase was observed.

To address this question, fall-applied fertilizer was compared to half of the P+K applied in the fall and the rest applied as starter fertilizer with the planter. Results showed slightly higher yields when some P+K was applied at planting, but this was not statistically significant. There was not a strong response to applying some P+K at planting vs. on the strip-tiller in the fall.

The project was designed to answer a few fertility questions and did not include a perfect comparison between strip-till and full-width tillage. Generally speaking, these systems yielded the same in the trial. Rosser noted that on low testing soils, applying a good fertility package in the strip seems to be more efficient than broadcasting a moderate amount of fertilizer. He also noted that the trials were conducted on lower testing soils, and the same yield responses may not be realized on high testing soils

Corn production in northern Ontario is still limited. Livestock producers grow some silage corn, some of which is seeded under plastic. It is anticipated that as availability of shorter season grain corn hybrids increases there will be more acres of corn. A variety trial was recently seeded in the Sturgeon Falls area.

Christine O’Reilly, Forage and Grazing Specialist, spoke about timing of first cut for hay. Yield and quality of forage do not change in a totally linear fashion. During vegetative stages yield increases rapidly, and quality declines slowly. As plants shift to reproductive stages, yield increases slowly and decline in quality is more rapid. Grasses decline in quality faster than legumes because of the way they lignify. Grasses have a base 0°C for growth while alfalfa is base 5°C and needs warmer weather for growth. This means it’s normal for grasses to be more mature than alfalfa, which we’re seeing this year.

If a stand is over 80% alfalfa, it should be cut according to the alfalfa growth stage. When there is more grass in the stand, timing of first cut should consider the growth stage of the grasses and whether high yield or high-quality hay is more important. If more than one cut is going to be taken, first cut should occur no later than fully headed stage of the grasses. Once the plant sets seed, regrowth is reduced. For maximum quality, cut when grasses reach the boot stage.

It is anticipated that feed protein sources will be expensive this year, so there may be value in focusing on producing good quality legumes for protein. Options include:

A producer asked if you can kill or harm the alfalfa if the grasses are advanced and you time first cut with the grass growth stage; typically, this producer waits until the alfalfa has buds before cutting. It was suggested that the timing of cutting hay should still be focused on what your goal for the forage is; cut it at grass boot stage or at heading for the best quality feed. Newer varieties tend to have aggressive regrowth and should not be harmed by cutting early. Alfalfa’s root reserves are full at the full flower stage. Cutting earlier taps those reserves and could harm long term survival if done repeatedly but cutting pre-bud will not kill the alfalfa. Good fertility and avoiding cutting during the fall rest period all help reduce stress on alfalfa.

There was some discussion about adjusting pasture rotation length to account for how fast grasses grow during the spring flush. Rotating based on a specific number of days does not take account of what the grass is doing, as grass growth depends on heat and moisture. To keep the grass in a vegetative state as long as possible, and allow it enough (but not too much!) rest, options include:

There was a question as to whether many producers put cattle out to graze on corn. This is an opportunity but may have its limits. Livestock tend to go directly for the grain, so they should be limited to smaller strips (1-3 day allocations) in the field which forces them to eat more of the foliage and therefore mitigates issues with acidosis.

Tracey Baute, Field Crop Entomologist, was on the call. She noted that alfalfa weevil has been found in Southern Ontario so northern producers should start watching for it. She also reminded producers that last year there were significant grasshopper issues in some fields in the northeast. Eggs that were laid in the fall will be hatching now with the warm, dry conditions. Contact Tracey if you see high levels of grasshoppers. Appropriate insecticide timing on young grasshoppers is very important for getting good control. Grasshoppers may clip soybeans off below the growing point. Coragen is registered in soybeans, forages and cereals for grasshopper control. If a second application is needed, a different product should be used, such as Matador.

It was noted that UQAT Laboratoire D’Analyse Agricole is now open for forage NIRS analysis. They are located in Notre-Dame-du-Nord which may be within driving distance for producers in Temiskaming District. If samples are delivered in the morning you can get results the next day.

Conditions and Updates by Region

Rainy River: Conditions have been good but on the dry side. Temperatures this week are as high at 29°C.  Rain is expected heading into the weekend. Crops at the research station in Emo look good, although there is some spotty emergence because of the lack of rain. Alfalfa has seen significant growth this week but first cut for dairy producers is not expected to occur until the first week of June. Some cattle are out on pasture, but this may be a bit on the early side. Planting conditions for field crops have been great and a lot of the planting is complete.

Thunder Bay: There has not been any rain recently, and conditions have been good for seeding. The largest grower in the region just finished seeding their final acres of canola. Trial work has been ongoing at the research station. Some of the specific projects were noted in the minutes of the first meeting found HERE.

Algoma: About half to 65% of the corn has been planted and planting is expected to be done by the weekend if there is no rain. Alfalfa is about 8” tall now and first cut is expected to occur before mid-June. There will be a 20 acre test of an annual forage mixture to be cut and baled, which will include open pollinated corn, long season soybeans, brassica species, and forage peas. Cows loved a similar forage mixture cut last year. It was noted that Brassicas generally don’t store well but, in a mixture they may be present in low amounts. There will also be some Mastergraze (corn for silage or grazing) grown, which will be cut as forage at 60-80 days.

Manitoulin: Like other regions, it has not rained since May 11th. Even with that rain, producers were back on fields on the 12th. Soybean and canola seeding are essentially complete, and cereals and corn are about 75% complete. Hay fields are now growing more quickly, and some fertilizer is going on hay fields, but it is getting a bit late for these applications. Some cattle have been turned out to pasture, but pasture growth so far has been limited.

Nipissing: Things are looking good in the region and although dust is flying during field work, there is moisture 1” down. Flea beetle are already at threshold (25% defoliation) in some canola fields and insecticides have been sprayed. More info on flea beetle can be found HERE. Winter wheat has reached growth stage 32 and second pass nitrogen is now going on some fields. Early planted spring cereals are ready for herbicide application. Hay fields may be a bit behind normal and are expected to be cut in early June.

Powassan: Early in the month conditions were very wet but are now drying out and producers are working to catch up. Some fields with heavier soils still have wet spots that are delaying planting. Pasture growth is now advancing more rapidly, and cattle will go out to pasture this week. It was noted that it seems to be a good year for dandelion growth, but some other weeds like smooth bedstraw were knocked back by late spring frosts.

Temiskaming: Seeding is well advanced and spring cereals have emerged and look healthy. They got a bit of rain this week but likely not enough to slow down field work much. We assume producers are out on fields because we did not have many people on the call from this region!

Cochrane: Cold conditions the day of the last meeting (2 weeks ago) was hard on the winter wheat. However, conditions were good in the days after the meeting and nitrogen went out on winter wheat. Spring cereal seeding is still in the early stages. The first warm rain fell last weekend and pastures greened up and grew about 2” in 48 hours. Last year seeding started in June, so this year is a bit earlier.

Manitoba: We are often joined by John Heard from Manitoba Ag, and he provided an update from our neighbouring province. They are about 75% planted which is normal for this date. However, compared to normal they’ve only had about 2/3 the amount of heat and less than 30% of normal rainfall. They are hoping for rain today. Canola is typically seeded at less than 1” deep, so it has been difficult to seed canola to moisture this year. In Manitoba they don’t have swede midge and so are not as keen to plant canola early. Canola is planted after corn and soybeans. Planting canola later tends to result in fewer issues with flea beetle because of the fast emergence and growth of canola during the warmer weather. Insecticide seed treatments last for about 4 to 5 weeks after seeds first begin to take on moisture, so later planting and faster emergence may improve the persistence of insecticide in canola seedlings and therefore better control flea beetle compared to canola that emerges slowly.