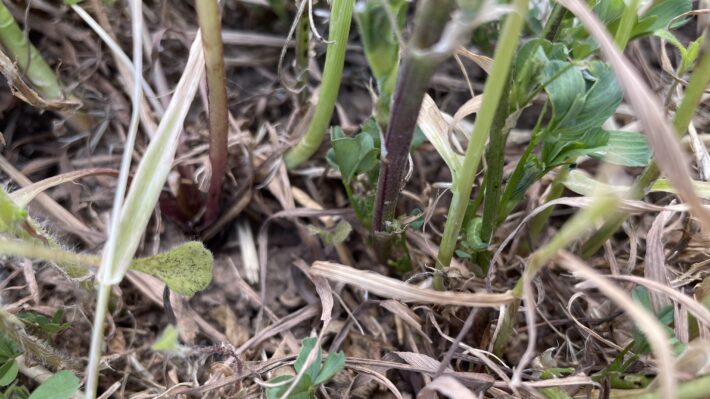 Cereals
Warm daytime and nighttime temperatures have resulted in rapid growth through the heading stage. Wheat can be vulnerable to hot temperatures during flowering especially if it gets above 33oC.  Pollen viability can be affected at that temperature when the pollen is developing at 5-7 days before flowering. In the areas where it has been really hot the wheat was beyond that stage. The wheat that is currently at that stage is in the cooler growing regions in general so hopefully the current heat will have little impact.

T3 fungicides have been going on for fusarium, powdery mildew and stripe rust over the last two weeks and will continue into this week. Much of the wheat crop transitioned from ideal timing to past ideal timing quickly, with high temperatures and high winds making spraying challenging; however, application a day too late is better than a day too early from an efficacy standpoint. The rainfast period for all the fungicide products is about 1 hour from being dry on the head. Heavy dews within the canopy, and a thick canopy have resulted in powdery mildew continuing to advance towards the penultimate and flag leaf in some areas in susceptible varieties. Physiological fleck is also common in many fields but is more predominant in some varieties. It’s difficult to determine if there is environmental stress contribution to this symptom beyond cloudy periods followed by bright sun. Stripe rust had been identified in Ontario, therefore scouting continues to be important. Stripe rust – also called yellow death in Europe – is the worst rust because it moves so quickly and can go from infection to reproduction within 7 days, although most varieties grown in Ontario have some resistance. Generally high temperatures would control the spread of new infections, but a new race or variant seems to tolerate higher temperatures.

Spring cereals are advancing rapidly, and some weed control is occurring, although some weeds are moving beyond the stage for good control. Cereal leaf beetle is present in fields, but there are also lots of predators. Aphids are also present, which may result in Barley yellow dwarf virus in some fields.

Corn
Most corn is at V4-V5 stage and has grown past the 2-3 leaf “stall”. Fields with heavy residue are a bit further behind. Sidedress N applications are starting, and herbicide applications are on-going.

There have been some replants for various things (cold injury, frost), but these are localized, and minor from overall acreage perspective. On loamy soils and or where gsoil moisture and planting conditions were good there are strong populations (32-35,000 ppa) . In areas with tougher or drier soils, the result is lower than planted populations (24-27,000 ppa). There was some stand reduction due to cork-screwing probably caused by fluctuating temperatures https://www.realagriculture.com/2021/06/corn-school-getting-to-the-root-of-corkscrew-corn/

Relative to most years, there has been little N loss due to the dry weather and lack of saturating rains. The PSNT annual study is done across the province where fields without any N are sampled to get an idea of natural mineralization from organic matter based on conditions so far this spring. The average came back at 13 ppm which is just slightly higher than long term average of 12 ppm and is similar to 2020 and 2018 sample results. 2021 side-dress N test results are available https://fieldcropnews.com/2021/06/nitrogen-status-in-2021-corn-fields/

Soybeans
Soybeans planted in late April are now at the 3rd trifoliate.  Soybeans planted mid-May are at the 1st trifoliate.  Overall, the crop is progressing nicely and taking advantage of the hot temperatures.  Soybeans like it warmer rather than cooler.  Overall, the crop is in good to excellent condition for this time of year although some regions continue to be very dry.  The main issue to date has been spotty plant stands due to dry soils.  There was frost damage in the north last week and replanting was necessary. Where soybeans had frost damage it took a few days to determine if they would regrow from the growing point. Compared to the overall acreage these problems are relatively small t. This is one of the best soybean crops we have had for this date in a number of years.

Weed Control:
Lack of rainfall reduced performance of many soil applied herbicides, resulting in weed escapes and then need to apply an additional herbicide pass through the field. Weed growth has been accelerated with onset of the warm conditions.

This spring has not been an ideal spring for weed control in field crops. The combination of a small window to apply herbicides, environmental conditions that have resulted in poor performance of some herbicides, accelerated growth of emerged weeds that are more tolerant to herbicides as they get bigger, along with competition for application of fungicides to wheat crops, have really challenged the timeliness of killing weeds within the critical weed-free period of corn and soybeans.

Sow thistle, Canada thistle, volunteer alfalfa and vetch are perennials that have been difficult to control this year and hormonal herbicides have been slow – 4 to 6 weeks. Perennial sow thistle control is part of a rotation strategy, since control can’t be achieved in a single year.

There are reports that fields that had glyphosate applied the day before shallow tillage, weed control was poor. Fluctuating temperatures seem to have slowed the weed control from herbicide applications. Emerged annual weeds in many cases have tolerated dry soils, cold and hot temperatures may have a big root system, a waxy cuticle and are more difficult to control. The best plan is to target weeds when they are small, use more water volume and separate the products in the sprayer to individual applications so improve efficacy of individual products. Peter Sikkema commented on time of day for herbicide applications. They studied 13 active ingredients at 3-hour time intervals from 6am till 12pm and found that every herbicide has a time of day effect and that overall the best control comes from herbicides applied at 3 pm. The control follows an inverted U-shape with worst control at 6 am and midnight. The impact of time of day on weed control is low for glyphosate, and higher for contact herbicides. Risk of crop injury may increase with improved weed control.

Dry Beans
Some fields were planted in mid to late May. Some early planted fields had frost injury but it did not lead to large acreage of replants. The normal planting time is around June 1st, and lot of planting happened over the past week. At least 80% of small-seeded beans (white, black, adzuki) are in the ground and more than half of the large beans (kidney, cranberry). Some may be waiting for moisture so they don’t have to seed so deep, but generally conditions have been good. Many fields are just beginning to emerge – within 5 days of planting – with no real issues reported. Fields may be weedy where growers did not cultivate as deep in an attempt to conserve moisture.

Canola
The acreage of spring canola may be down in the areas between Sudbury and Guelph but may be higher further north. Frost issues in northern regions resulted in Agricorp extending the planting deadline to June 10. Flea beetle are present in canola crops in various areas, however this is typical. Some growers have reached threshold and have sprayed. Swede midge are likely emerging now so traps should be set on fields Often late planted fields can be more negatively impacted by swede midge but warm weather, especially when combined with moisture, allows the crop to grow quickly which helps mitigate the injury.

Winter canola made it through many temperatures swings and frost with minimal damage, although yields are not likely to match those from last year. Flowering is over in southern regions and harvest is anticipated for late June/early July. 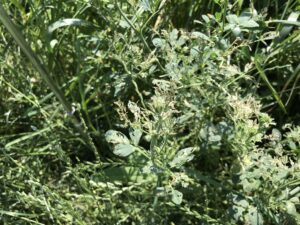 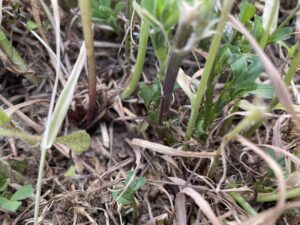 First-cut forage harvest is happening everywhere with good quality and yields. Alfalfa weevil pressure continues to be high in some areas therefore it is important to keep scouting and cut when thresholds are reached. Growers are also encouraged to scout recently harvested alfalfa fields to monitor weevil populations in the regrowth. Potato leafhopper has been found in Ontario, and populations already seem high. Alfalfa growers are encouraged to scout (especially new seedings) every 5-7 days to monitor leafhopper pressure. The damage caused by leafhoppers is easily mistaken for insufficient water. This pest is usually the most economically significant to alfalfa in the province https://fieldcropnews.com/2021/06/pest-alert-alfalfa-weevil-and-leafhopper-numbers-high/ 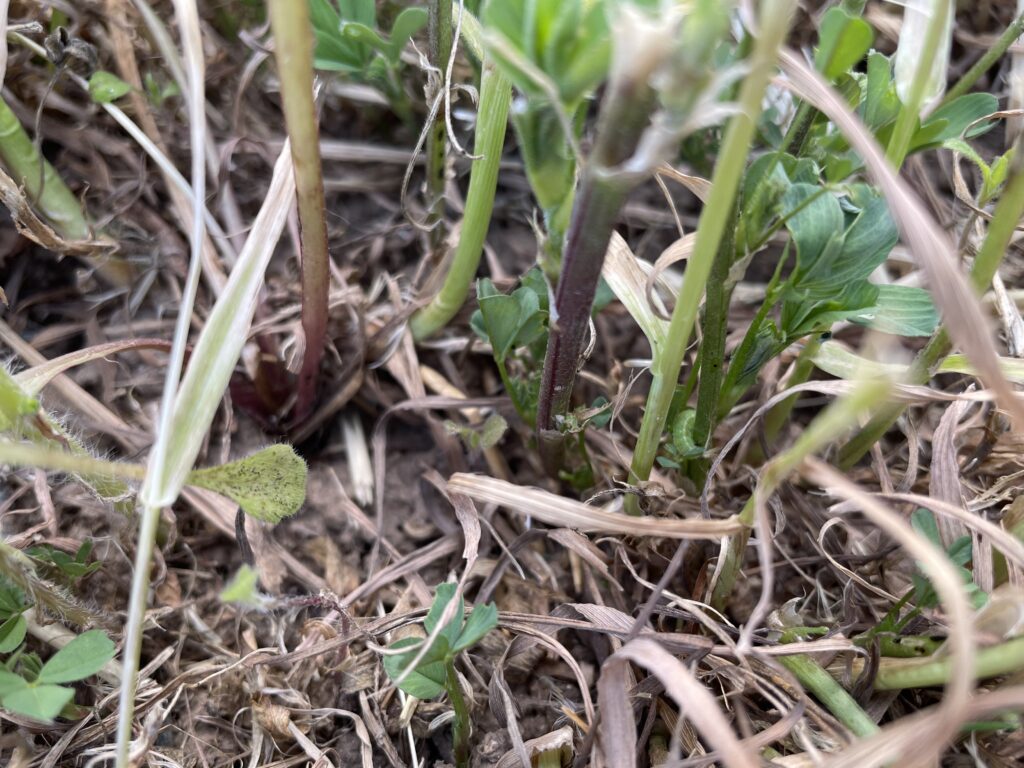