June 2nd  was the last meeting of the season. We had good attendance and would like to thank everyone that joined and participated.

It is estimated that 8,000 acres of canola and soybeans are being reseeded in northeastern Ontario after the frost events last weekend. Extent of frost damage depends on the crop growth stage, how low the temperature got and for how long, and soil type. Crops on muck soils are at greater risk of frost damage, and in some fields frost damage only occurred in muck areas. Crop residue in the field can block heat radiating up from the soil surface, and often there is more frost damage where there is residue compared to bare soil. In many northern areas, there was frost 2 or 3 nights in a row. Participants on the call expressed gratitude to the various dealers who are getting seed and other products in place quickly for replanting. There has not been a shortage of short-season soybeans, and canola seed is available but variety options are limited.

Horst Bohner. OMAFRA Soybean Specialist, was on the call and led a good discussion on soybean seeding and details related to frost and replanting.

Soybeans are a robust crop and can grow well in a range of tillage systems, soil pH and conditions. Dry conditions early on in the season, like we have seen in many regions this spring, are often not problematic for soybean. As long as they are seeded into some moisture and there is rain in August the soybeans will yield. However, soybeans are a subtropical species and cannot tolerate temperatures below -2C. If they are just beginning to knuckle out of the ground, the soil may provide enough warmth to mitigate damage to the growing point between the cotyledons. If soybeans are fully emerged temperatures below -2 can kill the growing point. Right after a frost you cannot tell whether the crop survived, and may have to wait 5-7 days to see whether growth resumes. Sometimes the main growing point dies but two new shoots will grow from the leaf axils. If temperatures are below -5C or if unifoliate or trifoliate leaves are present during a frost event, the soybeans are less likely to survive.

With recent frosts, significant acreage of soybeans in northern Ontario are being replanted. There is some flexibility with planting date on soybeans and there is still enough time for replanting to soybeans. Plant directly into the existing soybean crop. Seed to moisture up to 2.5” deep, or seed above the moisture line if rain is expected; do not seed in the transitional moisture zone or else the seed may imbibe some moisture but not have enough to emerge. On 7.5” row spacings in southern regions, about 90% yield potential can be achieved with a uniform stand of 90,000 plants/ac. In northern regions or on clay soils, plants don’t get as tall and have fewer nodes where pods are set, so 110,000 – 120,000 plants/ac are needed.

There may be value in banding about 10 gal/ac of 28% away from the seed. Based on experience with double crop soybeans in other regions and in situations where soybeans are delayed (e.g. soybean cyst nematode) adding about 30 lb/ac of actual nitrogen may help with early growth. Adding an inoculant to replanted soybeans is a low-cost input that may also provide value, even on fields with a history of soybeans. While the first planting may have had inoculant, it is not expected to benefit the second seeding.

Note that 5 days have been added to Agricorp’s deadline for crop insurance on soybeans; they must be seeded by June 5th.

At 0 to -2C risk of frost injury to canola is minimal, but at lower temperatures emerged canola is at greater risk. Generally speaking, participants report that where canola was planted into crop residue it was killed by frost. Where it is sitting in a depression or not fully emerged it survived the frost. Reseeding of canola has begun in the northwest and northeast. There was no damage reported in Nipissing District. Reseeded canola should grow quickly with warmer temperatures forecasted. Swede midge are expected to emerge now so fast growth and higher plant populations can help mitigate damage. More fertilizer should not be required in a replant scenario. Starter phosphorous does not always increase yields, but offers a “pop-up” effect which may not be needed when temperatures are warm.

Agricorp has extended the canola seeding deadline to June 10th.

Some wheat fields in the northeast are severely damaged , and others have patches of frost damage. In the northwest it was reported that oats planted in April look ok, but later planted oats have suffered frost damage. Corn grown under plastic is more than twice as tall as other fields. No frost damage was reported on corn; the growing point is underground in early growth stages.

New seedings of alfalfa have been damaged in Rainy River area, but not all fields are dead right to the ground (green stems) so they may survive. With new seedings, alfalfa can be re-seeded into the existing crop; there is not autotoxicity effect on new seedings. In Thunder Bay District alfalfa leaves yellowed with frost but injury is minor.

Rainy River: Temperatures reached lows of -4 or -5 depending on the area. It’s very dry in the district and farmers are seeding deeper than normal to try and find soil moisture. Forecast for next week is for temperatures in the mid 30s.

Nipissing: In west Sudbury and Verner areas there were no reports of frost damage. At the time of the meeting, conditions were so dry that crops cannot be planted into moisture. There is no rain in the forecast for the coming week. Flea beetle have been active and canola crops are being sprayed. Spraying field perimeters has not sufficiently knocked them back and increasing damage is being observed in the center of the fields. Buds are starting to form in hay crops, but the grasses are heading out so first cut will be done soon.

Cochrane: In the Matheson area the soybeans seem ok; many were just knuckling out of the ground and protected from frost. Temperatures were below -5C in some areas and emerged canola was killed. Cereal crops sustained some damaged, in some cases it was just parts of the field and dependent on soil type (muck). Weather has been decent and seeding is nearing completion. They welcomed ¼” of needed rain on Sunday. In the Iroquois Falls area planting is just getting started because growers are trying to totally avoid frost issues; they had frost in mid-June last year.

Thunder Bay: Conditions were dry at seeding but they have had some rain. In some areas 30 mm fell in less than an hour and some erosion was observed in canola fields. It was noted flea beetle pressure is much higher in fields that have had canola on short rotations. At the research station seeding is done except for forage and alfalfa plots. 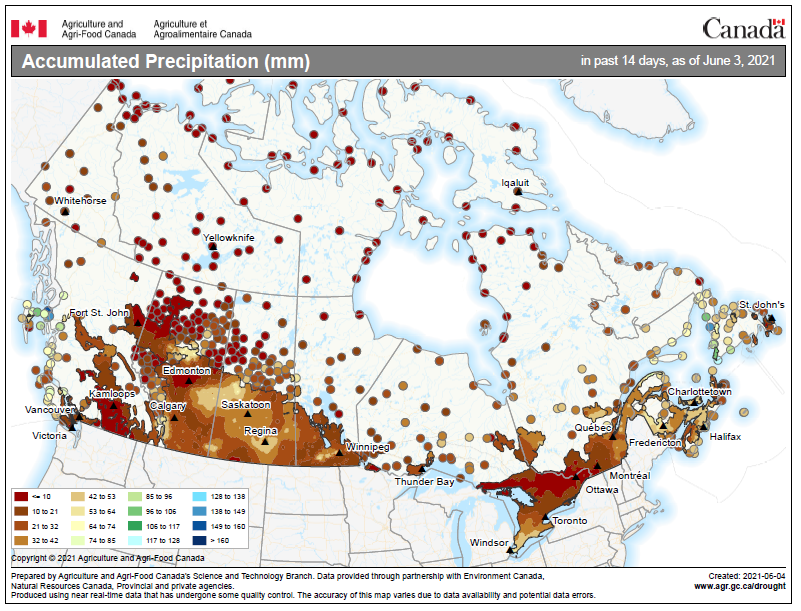