The incidence and severity of white mould (Sclerotinia sclerotiorum) is highly dependent on favourable weather conditions for the disease during soybean flowering. White mould prefers temperatures below 28 degrees C, moist soils, and high humidity.  Conditions over the last few weeks have been ideal for the disease in much of Ontario. It’s important to know that this disease overwinters in the soil and is not spread from field to field by wind.  Therefore, fields with a history of white mould in the past (even moderate pressure) are at greatest risk of having an outbreak.  The inoculum is already present in the field and will take advantage of the weather. 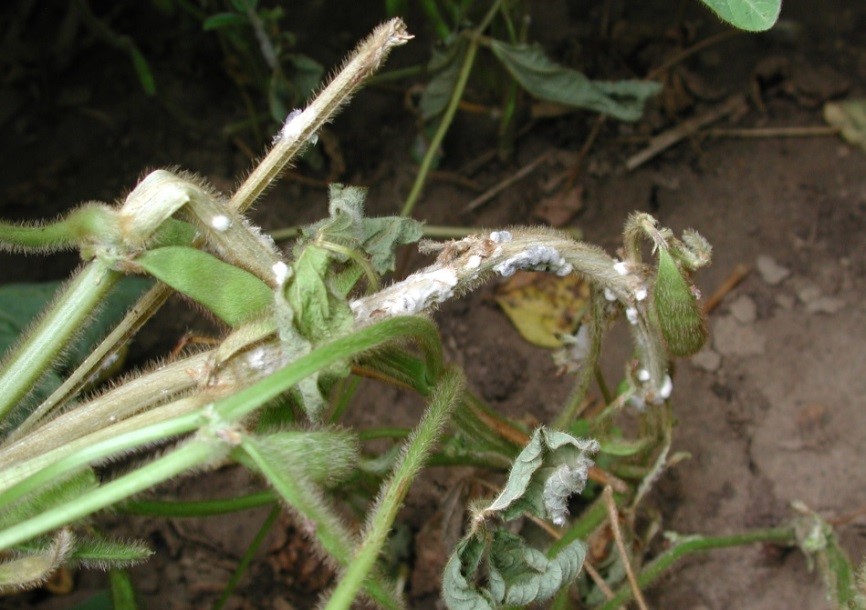 White mould in soybeans can result in large yield losses when disease pressure is high.

Foliar fungicides can be an important management tool to suppress white mould. Because white mould infection occurs mainly through soybean flowers, foliar fungicides must be applied relatively early during the R (reproductive) growth stages of the plant. Symptoms of the disease will not become evident until a few weeks after infection. By the time obvious disease symptoms are present, it’s too late to spray and get effective control. Good plant coverage (high spray water volumes) are essential for best results, and two applications are recommended in fields with a history of significant white mould.

What is the correct time to apply a foliar fungicide?

If white mould pressure is expected to be low because of hot, dry conditions during flowering, or because little white mould has been present in that field in past years, most growers choose to apply one application. Since there are a number of other foliar diseases that are also controlled, a single application is often applied at the R2 or even the R3 growth stage. This is a reasonable strategy because plants by this time are a good size, so the maximum number of flowers and foliage can be protected by this single application.

Ontario white mould inoculated trials have shown under high disease pressure (>40%), all products provided a yield benefit ranging from slight (3.8 bu/ac) to 17.5 (bu/ac).  Single applications can be effective if applied at the R2 stage but are very product specific (Cotegra, StrategoPro and Allegro) but under high white mould potential situations, a two fungicide application program has been the most consistent. 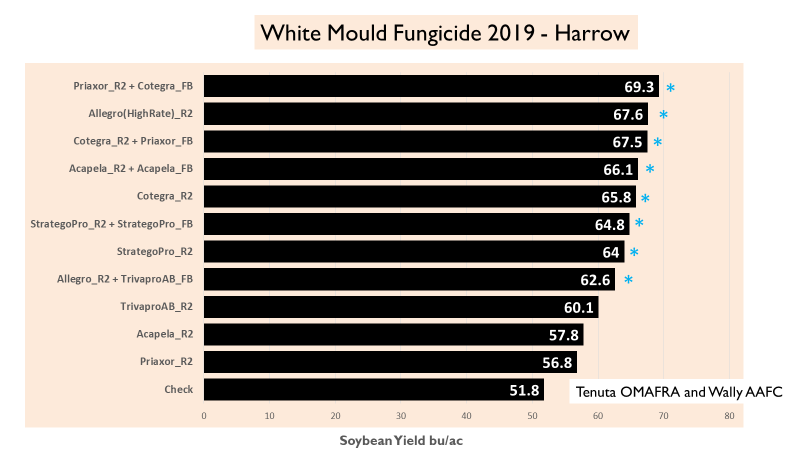 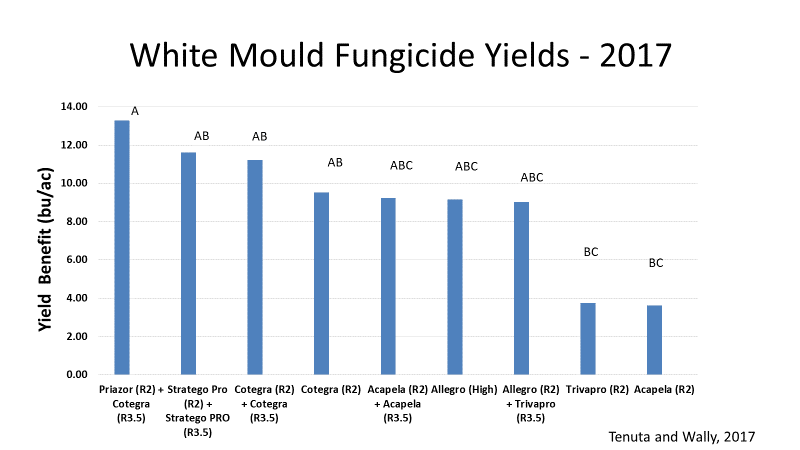 How to determine growth stages

The R1 growth stage (beginning flowering) occurs when 50% of the plants have at least one visible flower anywhere on the main stem. About 5-7 days later plants reach the R2 stage (full flower). R2 is reached when there is an open flower on one of the top 2 nodes on 50% of the plants. R3 (beginning pod) is reached when there is a pod 3/16 of an inch long on one of the top 4 nodes.

The scientific method of determining soybean growth stages is to count nodes on the main stem that have fully developed leaves. A node is the place on the stem where the leaf is attached. A leaf is considered fully developed when the leaf at the node above (the younger node) has unrolled. Do not count the node with leaves that are unrolled but the node below it. See figure #2 for an example of a plant that is at the R2 (full bloom growth stage).  See figure #3 for a plant that is at the R3 (beginning pod) growth stage.

Figure #2.  Identification of the uppermost node to be counted when determining growth stages (R2 growth stage). 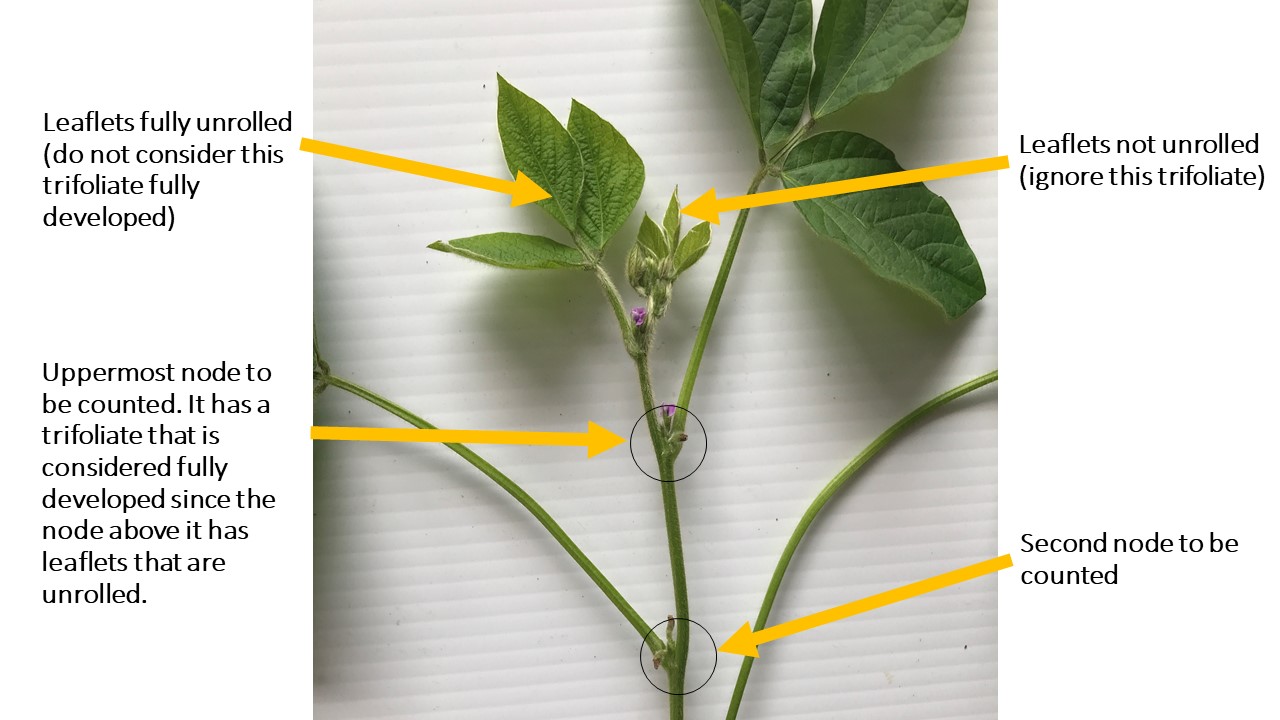 Figure #3.  Identification of the uppermost four nodes to be counted (R3 growth stage). 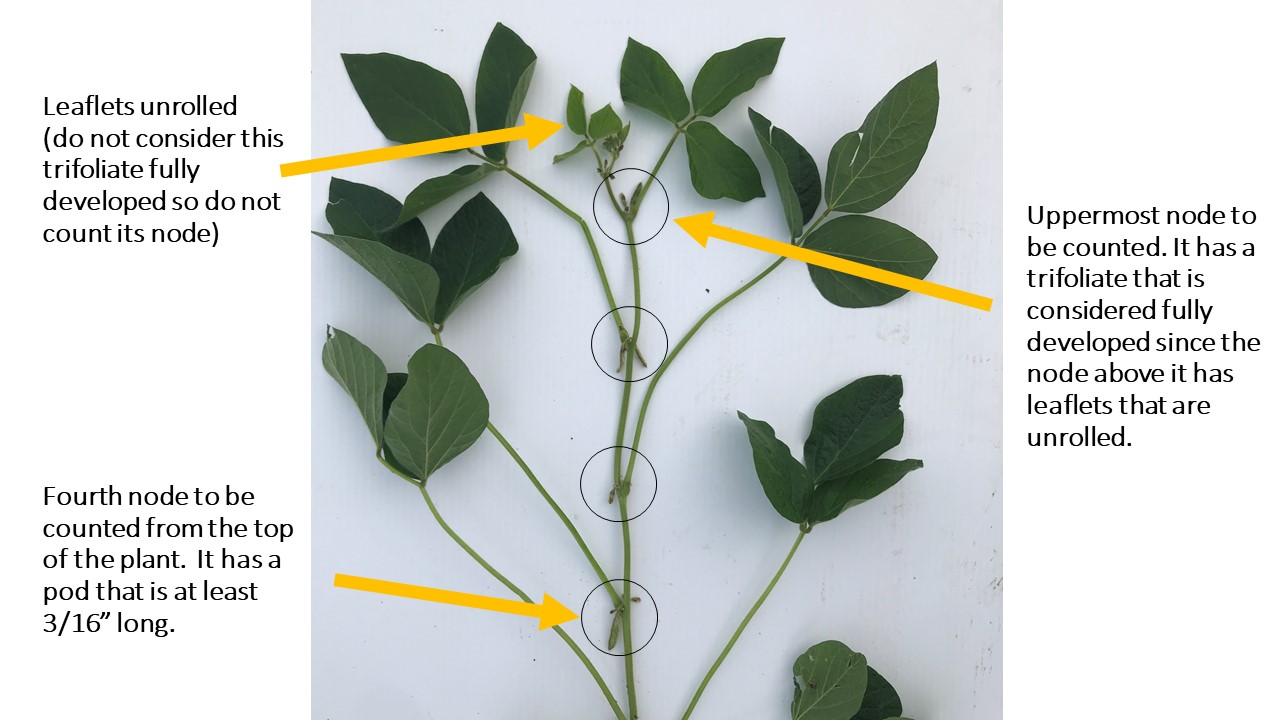 For a comprehensive explanation on determining soybean growth stages see:

Further resources on white mould are available from the Crop Protection Network at: