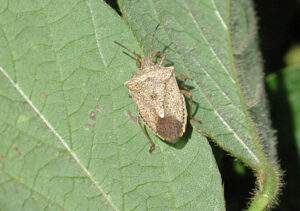 o represent in 2021. There have been several reports of brown stink bug being found in IP soys and dry beans. Stink bugs feed by piercing the pods and sucking on the seeds developing inside. They inject digestive enzymes into seeds, causing the seed to dimple or shrivel. Indirect effects can include delayed maturity (green bean syndrome) of injured plants, though stink bugs are not the only cause for green bean syndrome.

IP soybeans and dry beans are at higher risk and take fewer bugs to reach threshold than do crush soybeans. Early planted fields will be prone to early adult as soon as pods begin to form.  Later planted fields may be attractive later in the season as pods will be young and preferred by migrating adults that leave fields that are maturing.

Scout dry beans and soybeans for stink bugs weekly from R2 until early R6 stage of soybeans. Use the drop-cloth technique in row plantings , and the sweep-net technique for narrow row and drilled beans.

The drop-cloth method involves using a 90 cm (36 in.) long piece of white cloth positioned on the ground between two rows of soybeans. Vigorously shake the plants over the cloth in each of the two rows. Count the number of adults and nymphs and divide the number by 6 to obtain the average number of stink bugs in a 30-cm (1-ft.) row. Repeat this in at least four more areas of the field. Be careful not to disturb the plants prior to shaking them on the cloth.   For sweep net sampling, using a 38-cm (15-in.) diameter sweep net, take 20 sweep samples (in a 180°-arc sweep) in five areas of the field.  Determine the average number of adults and nymphs per sweep by dividing the total count by 100.

Threshold: For brown and green stink bugs, control may be warranted in crush soybeans if an average of 0.4 adults or nymphs per sweep is found or 2 bugs per 30 cm (1 ft) of row during the R3 to early R6 stages of soybeans.  In IP food grade and seed soybeans or dry beans, if an average of 1 stink bug per 30 cm (1 ft) of row or 0.2 bugs per sweep is found during R3 to early R6 stages.

No products are currently registered for stink bugs on soybeans or dry beans though products that work on other piercing insects like tarnished plant bug or soybean aphids will provide control of stink bugs. Apply foliar insecticide if thresholds are reached but pay close attention to the product’s pre-harvest intervals.