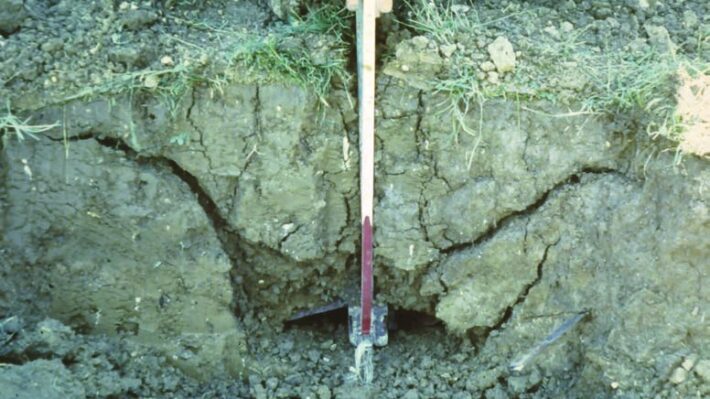 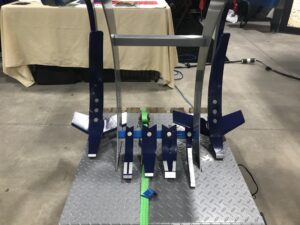 Figure 1. Subsoiler setup – does it matter?

In many fields, the month of August means the end of cereal harvest and the beginning of a window of opportunity. In many ways, this is the best time of the season for soil improvements beyond what small grains already provide. Applying manure, seeding cover crops, or maybe trying to bury the mistakes of the past for a fresh start.

Seeking a fresh start, some growers look to subsoiling to “fix” compaction. But does it work? Is successful subsoiling possible?

Subsoiling should be a “last resort” option restore function in severely damaged soil. It should not be a necessary and regular part of a cropping system. If it is, the source of the damage should be identified, and the cropping system modified to remove or mitigate it as much as possible.

The type, depth, and severity of compaction also determine what kind of mechanical remediation should be targeted with subsoiling. Broadly, there are three categories of compaction:

The focus here will be on pan compaction, which is quite common in Ontario soils.

Compaction at this layer is not all bad. In fact, if it doesn’t excessively limit drainage, gas exchange, and root growth, some amount of subsurface compaction can actually be beneficial as it protects deeper subsoil layers from compaction that could be permanent. This is especially true in tilled fields where the topsoil can be loose and less effective in dissipating wheel loads, and in coarse to medium-fine textured soils (sandy, loamy, or silty soils with less than 18% clay content) where the subsoil structure is generally weaker and more vulnerable.

So how can you tell if compacted layers are “excessively” limiting? Measuring bulk density or soil hardness with a penetrometer won’t do, because the key is macro-porosity – large pores or channels. This is difficult to measure, so the best approach is to look at root development in a soil pit.

Depending on the suspected depth of the problem (which can be estimated using a penetrometer), use a shovel or an excavator to dig a small pit across one or more crop rows. Clean any smearing from the side of the pit until you can start to see rooting patterns. Taking blocks of soil from the side of the pit in the compacted layer with a shovel and carefully breaking them open can also show if and how roots are growing, and whether there are macropores and root channels present.

Rooting patterns that indicate severe limitations include tap roots growing sideways, horizontal layering of roots, and roots deformed and/or thickened from trying to squeeze between large, compact soil structural units. Drainage limitations will create a “perched” water table indicated by gray soil colours and/or mottling. There will be fewer roots growing in the compacted layer, but if they are able to pass through and continue growing normally below the layer, subsoiling should not be necessary.

To see an example of this evaluation process, tune in to Ontario Virtual Diagnostic Days on September 14th.

If pan compaction is severe enough and requires mechanical loosening, it must be done without compromising the load-bearing capacity of this layer that protects the deeper subsoil. In most cases, that means not completely breaking up and loosening the pan but creating cracks or fissures to re-establish vertical porosity for roots and water to pass through.

This can be achieved when the soil mass is lifted and flows over a subsurface blade, cracking as it bends (Figures 2, 3). A winged subsoiler tine is usually used for this operation, but the specifics of the setup are important. 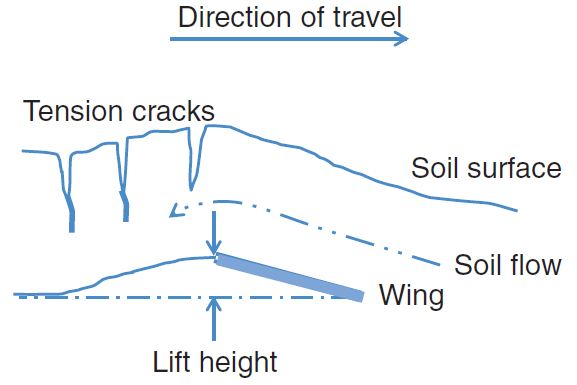 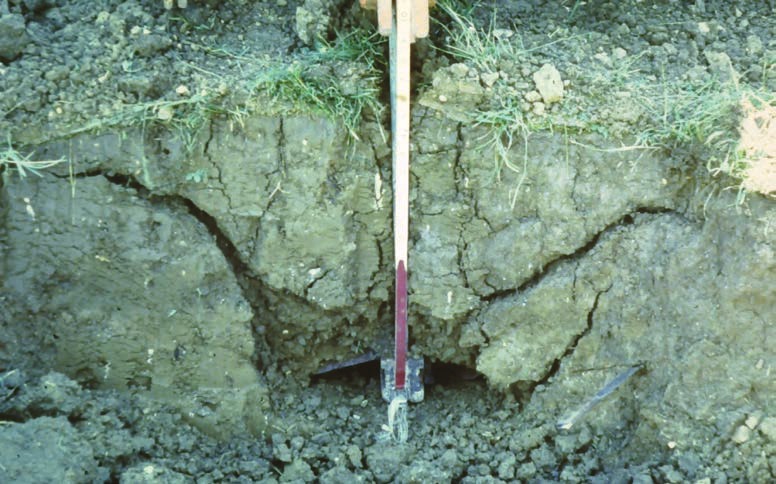 Figure 3. Soil failure pattern created by a winged tine. Note the vertical fissures. (From Godwin and Spoor, 2015, after Spoor, 2006)

With a winged subsoiler, the wing lift height (the vertical distance between the tip of the point and the upper edge of the wing) determines the degree of loosening and rearrangement. Too little lift won’t create enough tension to cause cracks, while too much will cause excessive disturbance. Working depth and soil moisture are also important factors. All else equal, greater working depths or higher soil moisture will result in fewer and smaller cracks. The target working depth should be just below the compacted layer, unless greater depth is required to produce the right type of disturbance.

Most subsoilers have multiple tines, and their spacing will also influence the result. If the compaction layer is consistent across the problem area, the complete soil mass should be uniformly lifted. Based on years of field work in the UK, Richard Godwin and Gordon Spoor recommend tine spacings between 1.5 and 2.0 times the working depth to achieve uniform lifting while leaving a level soil surface.

Is it worth it?

In severe cases, subsoiling can be the only way to remediate compaction in a reasonable timeframe for most farm operations. Done well, it can result in improved soil function and crop growth. But decades of research on subsoiling have shown mixed results. There are real risks of making the problem worse, and unless equipment traffic is controlled after subsoiling, re-compaction occurs quickly. When it comes to compaction, prevention is always the best solution. If that’s no longer possible, make sure you’re achieving your objectives for subsoiling, try to stabilize the newly created structure with roots, and avoid driving over it as long as possible.