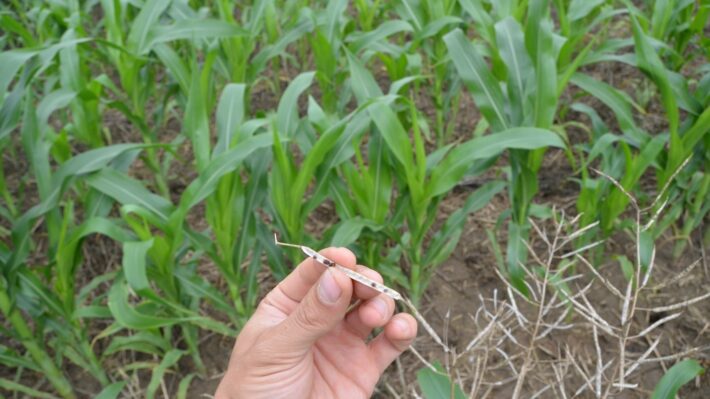 It’s the time of year when Ontario farmers are turning their attention to seeding cover crops following cereal harvest. Each grower has their own reasons for growing a cover crop – whether it’s to improve organic matter, hold onto nutrients from manure, provide a nitrogen credit or protect against erosion. In this report, we will explore how cover crops can help manage weeds. We will discuss which species are most effective, share a couple of Ontario examples and provide tips on how to avoid cover crops becoming weeds themselves.

Cover crops can suppress weeds in three main ways: through competition for resources (e.g. water and nutrients), modification of the soil environment (e.g. mulch preventing light penetration) and direct interaction with weeds via allelopathy. The degree of weed suppression depends on how quickly the cover crop establishes, how competitively it grows and whether it releases allelopathic compounds. Lasting surface residue is also beneficial. Cover crops are much more effective suppressing annual weeds versus perennials, which have well-established root systems and energy reserves.

A cover crop such as radish, which establishes and canopies very quickly, is an excellent weed fighter in the summer and fall. However, it leaves very little surface residue in spring, causing minimal residual weed suppression. Species such as winter rye or triticale don’t generate much biomass in fall but can grow aggressively and canopy fully if seeded early. In spring, they green up quickly and compete with early emerging annual weeds. These species also release allelopathic chemicals and can provide surface residue following termination.

For growers looking for a simple approach, straight oats (Figure 1) or a mixture of oats and radish can be very effective in suppressing weeds during the late summer and early fall. Those who are comfortable with overwintering species will benefit from added suppression of early-season annuals. The decision depends on your cropping system and your other goals for the cover crop. 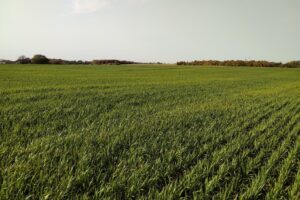 Figure 1. An oat cover crop in the fall of 2020 in Waterloo region.

Recent research from the University of Guelph, Ridgetown Campus, led by Taïga Cholette, evaluated seventeen different cover crop single and multi-species combinations for their effects on glyphosate-resistant (GR) Canada fleabane suppression in corn. Cover crop treatments that included oilseed radish provided the fastest ground cover. All treatments provided greater than 75% suppression of Canada fleabane in May compared to a no cover crop control. However, the greatest and longest-lasting suppression was seen in treatments that included overwintering species such as cereal rye and annual ryegrass.

This season provided a strong example of the weed-suppressing power of cover crops to a Haldimand County grower. He drilled cereal rye last fall (40 lbs/acre) into his entire field except for a small section separated by a ditch. This spring, he planted IP soybeans into the rye before spraying it off. The field received a tank-mix of Roundup®, Canopy™ Pro and Boundary®.

By early July, the field was very clean (Figure 2A). The small section on the other side of the ditch, however, had a high density of fleabane plants poking above the soybean canopy (Figure 2B). Similar examples have been provided in recent years by Ontario growers who grow rye either as a crop or cover crop. 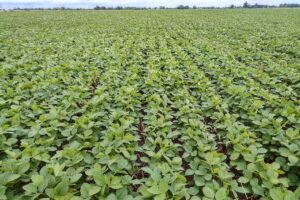 Figure 2. Field without any Canada fleabane present (A) and small section of field that did not have ceral rye cover crop, with high density of Canada fleabane (B). July 9, 2021. 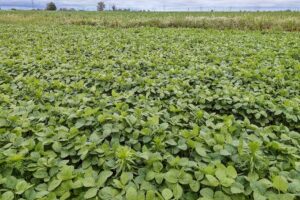 Figure 2. Field without any Canada fleabane present (A) and small section of field that did not have ceral rye cover crop, with high density of Canada fleabane (B). July 9, 2021.

While cover crops can provide weed management benefits, they can also pose risks. Certain species can be challenging to control in the spring and can themselves become weeds. Annual ryegrass, despite its weed suppression abilities, is very difficult to terminate and has escaped control in numerous instances in Ontario. Also, some species can unexpectedly overwinter and may not be controlled by a glyphosate-only burndown, depending on their growth stage. Figure 3 shows such an example, where purple-top turnip survived winter, was not killed in mid-May with a high rate of glyphosate and produced viable seed. Early control is key to achieving effective termination in such cases. 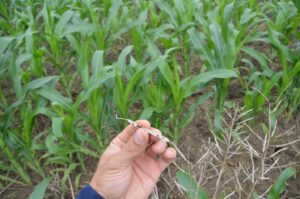 Figure 3. Viable seed produced by purple-top turnip that survived burndown prior to corn planting in 2021.

Cover crops are a tool that can augment the weed management program on your farm. If you’re new to cover crops, start small and simply with species that winterkill. If you are looking for additional weed suppression, consider species like cereal rye that provide spring growth. Integrating cover crops requires planning and additional management but can provide strong benefits, especially in assisting to control herbicide-resistant weeds. 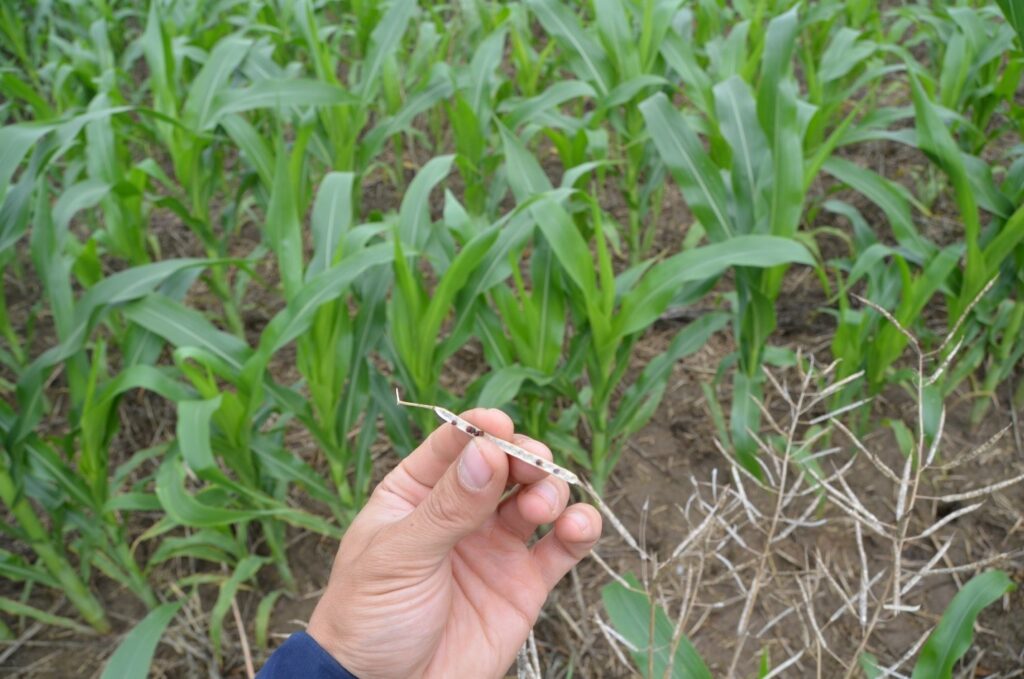