The major canola insect Brassicogethes viridescens, or the pollen beetle, is of growing concern in Canada as it has the potential to significantly impact yield from canola crops. The pollen beetle is a known canola pest in Europe and has also been an established pest in the provinces of Nova Scotia, Prince Edward Island and Quebec. Canola growers and researchers in Canada anticipate the westward expansion of the pollen beetle across the country and thus research on the insect’s location and impact on yield is currently underway to monitor the progression of the pest. The pollen beetle is a shiny bronze-green beetle with a 2-2.9 mm long convex shape and has yellow-orange legs and mouth. 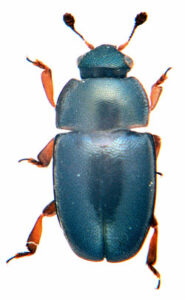 Damage to Brassiceae crops and specifically canola crops will occur when the larvae feed inside the bud at the early bud stage leading to bud abortion and subsequent yield loss. Adults may feed on buds but primarily feed on pollen and opened flowers which avoids significant damage and bud abortion. Pollen beetles are most likely to affect spring canola because winter canola typically flowers well before the pollen beetle emerge from overwintering. This timeline prevents the beetles from laying eggs at the early bud stage of the crop to avoid significant bud abortion and yield loss. Therefore, pollen beetles are a greater threat to spring canola crops.

Canola plants are robust in that they can compensate for aborted buds by producing new buds to offset low levels of pollen beetle larvae feeding. At high infestation rates, pollen beetle feeding can cause yield loss. Action thresholds for controlling the pest are currently being researched. Further research into this pest, threshold and its movement across the country is anticipated to help canola growers manage pollen beetle before economic yield threshold is significantly impacted.  Surveys for pollen beetle are being conducted in canola fields across Canada. To date, pollen beetle has not been confirmed in Ontario.

Is the pollen beetle Brassicogethes viridescens (Coleoptera: Nitidulidae) a pest of concern for canola growers? Presentation