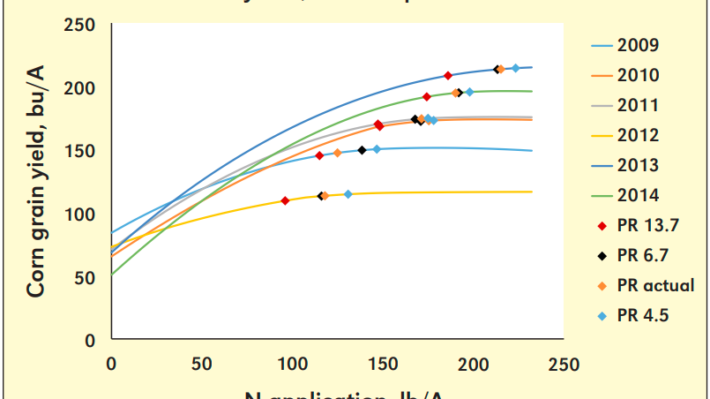 What Will Be the Corn Nitrogen Story for 2021?

While the 2021 growing season started dry, regular and often heavy rains started for many areas from Southern to Eastern Ontario from late June through July. Some received well above normal rainfall in July. Naturally, conversations began revolving around “are we losing nitrogen (N)” or “will we need more N on corn?”

Not surprisingly optimum N rate can significantly vary year to year even within a relatively small area. Within the same ~4-acre corn-on-corn N trial at Elora, Dr. Bill Deen has shown optimum N rate to vary from 120 to 220 lb-N/ac depending on the year (Figure 1). 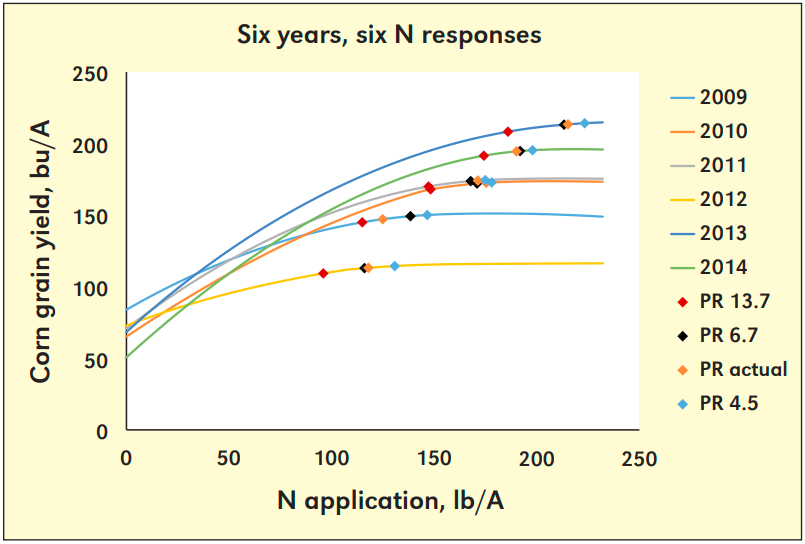 Over 10 years, Bill and his grad students have some interesting finds:

While not repeated beyond Elora, it is speculated that at locations where N mineralization plays a more important role (e.g. legume nitrogen credits) or where soils are more susceptible to N-loss (e.g. denitrification on heavier textured or poorly drained soils) that factors other than yield may have more impact on optimum N rate.

Given observations from this trial and a 2021 corn crop with excellent yield potential and significant rainfall from later June through July, it was looking like an environment where optimum N rates could be higher than normal. It was important to have some data to answer “was more N required for corn in 2021?”. Sixteen corn fields close to rainfall data were selected for top-up N trials. A small top-up N application (50 lb-N/ac at silking) was chosen at a random, representative spot where yields from grower rate and top-up rate treatments will be compared at the end of the year. Some additional information (soil nitrate, leaf tissue N) was also collected to see if these can provide guidance in future years for identifying fields that may or may not respond to top-up applications.

Despite some areas receiving twice the normal rainfall in July, most top-up fields appeared in good shape for N at grower normal rates. Of 16 fields selected, 14 showed no obvious N deficiency symptoms at silking or dough-stage, with green leaves down to the naturally senescing leaves at the base of the plants.

The two exceptions were fields west of London where the greatest rainfall was received. These fields had clear N deficiency symptoms (yellowing of midrib from leaf tip, senescence of lower leaves) only 4 or 5 leaves from the ear leaf by silking and appeared to be strong candidates for responding to top-up N. Interestingly, visiting again at mid-dough stage in later August after rains ceased, N deficiency did not appear to have progressed any further in these fields, looking similar to where it was at silking. Purely speculation, but begs the question whether N was lost in these fields, or whether frequent excess rainfall was just impairing uptake or N mineralization? Stay tuned for yield results this fall.

What Growers Can Do

It’s often said if you don’t measure, you don’t know. Ideally, the best way to get a handle at year end is to test N rates and keep records on-farm. Some growers will regularly include a couple N rate strips the width of their combine with a higher and lower than their normal N rate (e.g. -30 and +30 lb-N/ac) to have yield records, and an idea for where their normal practice stands.

While N rate strips provide good insight any year, they would be particularly beneficial during years of more extreme N requirements (e.g. exceptional yield potential and/or higher expectations of loss). If lower N rates yield as good as normal N rates during an expected high demand year, perhaps there is room to lower overall N rates without significant risk? N rate strips also provide insight for what farms may be generally more or less responsive to N and allow adjustment of N rates by farm. 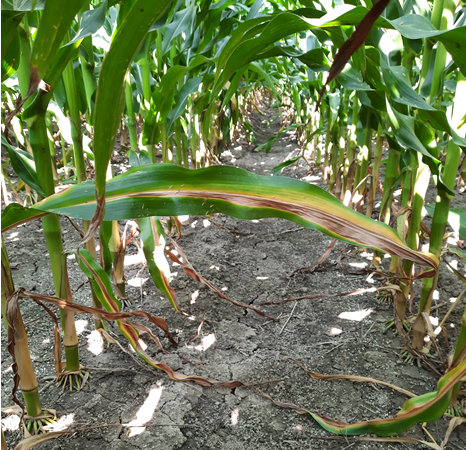 Figure 2. Typical N deficiency symptoms in corn – leaf yellowing and senescence along the mid rib in from the leaf tip, starting from older/lower leaves.

If you don’t have N rate strips, you could still scout now for N deficiency observations (Figure 2). Assessing N deficiency progress could provide a very crude report card. It is not unusual to have some leaf firing at the lower part of plants this late in season, and this is generally not expected to indicate a shortage or yield loss. If leaves are green down to the base of the plant at the end of grain fill, there was likely excess N. Like extreme years, it would be good to check areas of the field you think may be more or less responsive to N. If leaves are firing well up the plant, or approaching the ear leaf, perhaps there was a shortage of N, or issues with N uptake? At this point (September 1), many fields across the province are in, or moving into dent stage, so perhaps 2 to 3 weeks from maturity.