Below is an overview of herbicide injury scenarios presented at the SouthWest Crop Diagnostic Days .

Scenario 1: A field of corn has been replanted due to a poor stand. After planting the producer has decided to remove the existing stand as it is effectively a weed to the new crop. Unfortunately weather delayed the graminicide application and it was applied just prior to the replanted corn spiking through. To compound this issue, the herbicide was mistakenly applied at four times the volunteer corn rate. The use of applying a graminicide to remove a poor stand of corn has been researched in Ontario and more information can be found in the following article.

Scenario 2:  A producer has a horrible infestation of field horsetail and decides to tank-mix MCPA with glyphosate to improve control. The results are not as desired.

Although MCPA is registered for use on field corn in Ontario, it was done so in an era where there were few options. The experience in Ontario is that sometimes one can apply MCPA to corn and see good crop safety, in other instances, particularly when the crop is under stress, the injury can be dramatic. Injury may be enhanced when MCPA is tank-mixed with glyphosate. Dr. Peter Sikkema (University of Guelph) is currently studying the interactions between MCPA + glyphosate applications and corn injury and yield.

Scenario 3: The picture below demonstrates crop injury caused tank-contamination with a protox inhibiting herbicide (group 14), in this particular example Reflex (fomesafen). The photos below represents transient injury from a 10% of labelled rate. This typically has no impact on crop yield.

Scenario 4: Below is an example of tank contamination caused by two different herbicides from the same general family, but with very different results.

Both Puma (fenoxaprop) and Achieve (tralkoxydim) are grass herbicides known as graminicides (WSSA group 1). However, injury from an unintended tank contamination is typically greater with Achieve than Puma. This maybe due to Puma containing a safener. Both products however, at low doses can have a significantly negative impact on yield.

Scenario 5: Below is an example of crop injury caused by an accidental application of a cereal herbicide, Infinity (pyrasolufotole/bromoxynil). The injury 3-5 days after application is often a bright bleaching colour (see scenario 7) typically on the most prominent leaves at application (in this case the 3rd and 4th) then injury then turns to yellowing (chlorosis) followed by browning (necrosis). The bromoxynil portion can also cause the browing of leaf tissue, particularly if applied prior to the 4 leaf stage. The injury caused by Infinity does not necessarily result in yield loss, but the injury caused is typically unacceptable. 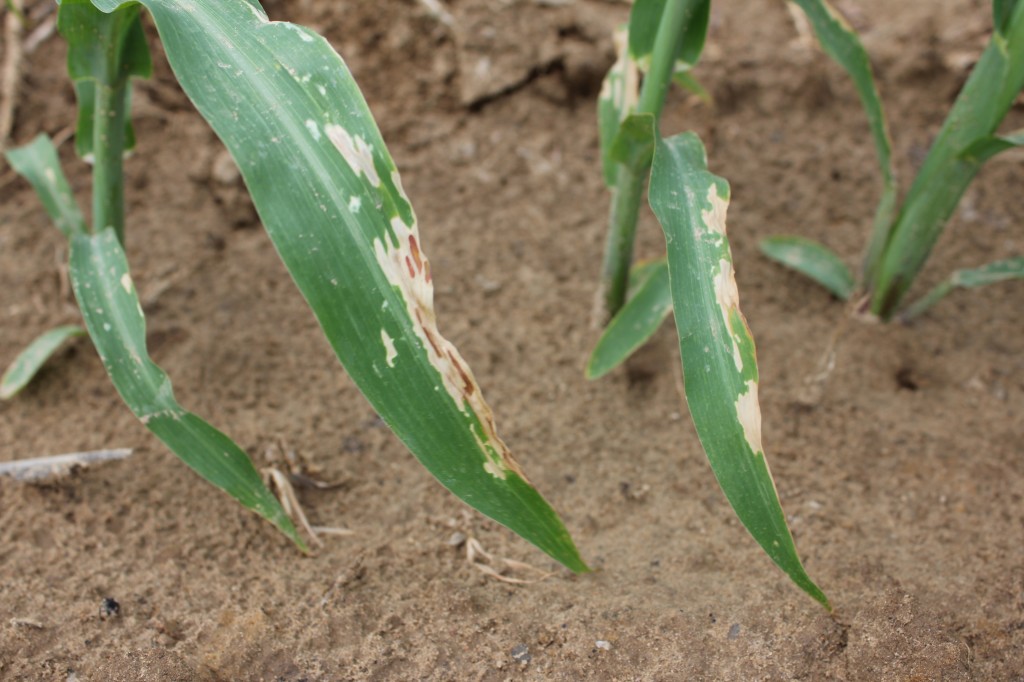 Scenario 6: The picture below demonstrates crop injury caused by an accidental application of Flexstar (glyphosate + fomesafen) a herbicide for glyphosate tolerant soybean. The severity of injury with fomesafen can vary significantly. Below is an example of low to moderate injury, it can be much worse.

Scenario 9: Below is an example of injury caused by inappropriate application timing. Integrity (saflufenacil/dimethenamid-p) was applied when corn was at the 2-3 leaf stage. Integrity can only be applied prior to corn emergence.

Scenario 10: Below is an example of an experimental herbicide, not yet registered in Canada that will likely be intended only for use as a pre emergent soybean herbicide. The, broadleaf component of this herbicide, flumioxazin, is registered in the United States for use on corn provided it is applied several days prior to planting. In this particular scenario, the herbicide was applied prior to emergence but 3 days after planting.