Weather has been dry allowing for a lot of field work. Most fertilizer and pre-emerge herbicide applications are done. Crop Heat Units (CHUs) are behind about 30 CHU from the 30 year average. 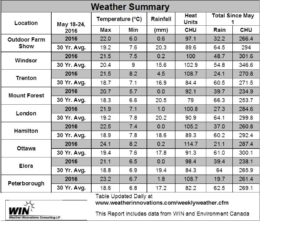 Generally anticipated first cut yields will be lower than normal due to the cool and dry spring weather. On farm forage inventories are generally good. Orchard grass now heading and the rare alfalfa stem is at beginning bud stage. Depending on percent of the forage mix, growers are expected to first cut about the 28th of May. Cereal rye is at the head half emerged stage and should be harvested now for optimum forage quality.

New alfalfa seedings – early seeded are now at 4th trifoliate; drilled and starter (April 20 planted). Concern about new forage seedling with a companion / cover crop, will be dry and struggle with competition.

Winter wheat is at the Zadok 37 (flag-leaf half emerged) stage looking good in most areas.

Stripe rust infection spread last week from the southwest (Windsor to London) to Huron (Exeter) and Bruce County (Walkerton). Fields with strip rust tolerant varieties or were sprayed early at the T1 stage, have less pressure. Higher nighttime temperatures should slow the development and spread of strip rust (optimum 10-20 oC). Growers should continue to scout their fields and if stripe rust is a problem, growers should spray immediately but be aware of wheat stage.  Once the wheat reaches boot stage (Zadoks 45), the application of products containing a strobilurin fungicide may increase the amount of mycotoxins in the grain.  As we approach the flowering stage (Zadok’s 59), the use of a T3 fungicide to control Fusarium head blight will also control many leaf diseases, such as stripe rust. Weather forecast and DONcast  may assist to best coordinate need for FHB fungicide application at flowering.

Spring cereals are now in the tillering stage (Zadok 26 to 30). Many annual weeds have emerged and growers should consider spraying.

Most corn planted and is at the spike to first-leaf over stage with the most advanced corn at the two-leaf over stage.  Several are finding wire worm.

Table 1. Nitrogen Recommendations Based on Nitrate-Nitrogen

Soybean planting about 95% complete across the province.  Some concern about potential need to re-spray due to dry weather. Small acreage shift from intended corn to soybeans with the recent stronger soybean prices.

Few acres in eastern Ontario and most of the planting is now complete. Conditions for emergence have been good. Flea beetle damage has been reported. Fields should be scouted now. This is also the time to set up monitoring traps for swede midge. The adult emergence peak is end of May to mid June. See infosheet for more information: https://fieldcropnews.com/2016/05/swede-midge-in-canola-infosheet/

Registered online users can also report their acres through online services. Online reporting is available from May 16 to June 30. Customers can also report by phone, fax, email or mail. Crops that can be reported online are Grains and oilseed spring seeded crops. Have your Agricorp ID ready and go to agricorp.com/acreage

The new , Weed Seeds Order 2016  includes several new Prohibited Noxious species,  reclassifies listed species based on the most recent information about their distribution in Canada, and/or their affect on the value of the seed.  Seed sold in, or imported into Canada provides a pathway for the introduction and movement of weeds and the regulation of Weed Seeds Order species helps preserve the prosperity of Canada’s agricultural sector.

Tuesday, June 7, 2016. The Winchester Agri-Business Crop Update breakfast meetings are held every two weeks on Tuesdays at the Country Kitchen (Winchester, ON) from 7:30 to 9:30 a.m.  .