Photo of first cut hay down in Peterborough County.

Thank you to Katja Rochacewich (Bayer) for sponsoring breakfast.

Overall, crops in the region are looking good. Rainfall has been scattered and total amount variable (0-3”). Windy conditions across central Ontario have complicated spraying for the past few days. Despite the slow, cool spring, attendees agreed that planting and crop maturity in central Ontario is ahead of this time in 2017 and the level of confidence in the season is high.

Recent traffic accidents involving farm equipment across the province are a reminder to be alert and drive defensively to help make sure everyone gets home safely.

Cereal leaf beetle is an issue. Most damage is done by larvae in June. If an average of three larvae per tiller is found before boot stage, spray is warranted. One CLB adult or larvae per stem warrants control after boot but prior to heading. If significant feeding is taking place on the flag leaf in the early heading stages, control may be warranted. Only use foliar insecticides when thresholds have been reached and pay close attention to pre-harvest intervals. For more information consult the Agronomy Guide: Pub 811 – Chapter 15 and the Field Crop Protection Guide: Pub 812.

Disease pressure generally remains low, and the first report of stripe rust in central Ontario was reported at the meeting. A fusarium timing (T3) fungicide will reduce stripe rust and other late leaf diseases.  In research trials, foliar ATS with herbicides or fungicides showed significant leaf burn, but yield impacts remain to be evaluated.

Virtually all corn acres have been planted in the region; only a few acres on very heavy, wet ground remain. Recently planted fields are emerging, while the most advanced corn is at 8 leaf stage. Some fields are showing symptoms of rapid growth in response to the heat last week. Managing Western Bean Cutworm may prove more challenging in central Ontario this year than in the past; planting delays in southwestern Ontario will put corn maturity at about the same stage in both regions, tying up contractors who generally start in the south and move east.

Lots of weedy fields will need attention shortly. Most pre-emergence herbicides now have enough rainfall for activation and will prevent new weeds from germinating. However, fields with pre-emergence herbicides that did not receive the required rainfall for up to two weeks after application may have weeds that have escaped and need to be monitored to determine if additional action is required.

Planting is approximately 95-97% complete in the region. The remaining acres are on heavy wet ground. Some thin stands have been reported on no-till ground following corn, highlighting issues with residue management and planter set-up. Weed control remains a challenge in IP beans, especially because they are progressing quickly from last week’s heat. Soybean maturity is between cotyledon emergence and 2nd trifoliate.

More questions are coming in about fleabane and its control. Many chose to plant and ignore weed control at that time. Rapid emergence of beans have meant some growers have been caught short on getting pre-emergence herbicides on. Now they are looking for a solution; one may not exist for IP beans, and even glyphosate-tolerant soybeans control may be problematic if the fleabane is glyphosate-resistant and the beans are not tolerant of dicamba.

Early reports on first cut hay/haylage yields in the area are variable, but quality seems to be good. The biggest challenge so far has been the difference in maturity between grasses and alfalfa. While many areas have orchardgrass, tall fescue, and ryegrass heading out, alfalfa is barely at bud stage. Many farmers are focusing on producing higher quality hay than normal, in response to 2017’s hay crop. New hay seedings look good.

Alfalfa weevil development has been delayed compared to the hay crop. While normally control involves cutting the hay to eliminate the weevils’ food source, in many areas the 3rd and 4th instar (which cause the most damage) will be feeding off of regrowth after 1st cut. Damaged fields will look greyish from a distance. Thresholds for spraying are as follows:

There is still some silage corn to be planted, and those who have not seeded yet are talking of switching to shorter-season varieties. Ontario’s dates for switching corn to shorter-season varieties are to reduce the risk of immature or wet grain in the fall. For silage, the goal is to balance stalk digestibility with grain starch content to ensure complete fermentation and enough tonnage of good quality. Research from Wisconsin shows that the switch date for silage corn is roughly one week later than for grain. Sorghum-sudangrass is an alternative silage crop to corn. It is a warm-season annual grass that will not germinate until soil temperatures are above 18°C, which means planting usually should not start until late May or early June in much of the province.

Approximately 50% of edible beans in the region have been planted.

Pre-emergence herbicides have been effective when applied at the correct timing. There are lots of weed challenges where growers missed applying a pre-emergence herbicide. Temperature swings can change the efficacy of chemistries, as plant physiology is affected by fast and dramatic changes. The quick drop in temperature during the last week has caused some slight herbicide damage.

Much more glyphosate-resistant fleabane has been reported in the region than expected, and it covers a larger area than anticipated. Consider all fleabane resistant and plan accordingly. Dicamba was effective for control, but it must be applied before the fleabane gets too big.

Many fields are following the “start clean, stay clean” mantra, but there are some dirty fields out there. Early weed pressure costs yield! Peter Sikkema reported that for every inch of weed growth competing with the corn from 0-4”, corn loses 2 bu/ac. Weeds from 5-8” cost 3.5 bu/ac, and weeds from 9-12” cost 5.5 bu/ac. Given that it still costs the same to kill the weeds before emergence or at 6”, this cost is huge and totally avoidable. Start clean, stay clean until 6 leaf corn or 3 trifoliate soybeans! 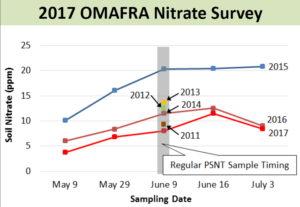 Agricorp has received below average numbers of replants this year. The majority of these were for winter wheat.

GFO has hired Laura Ferrier as an agronomist. This new role reflects the organization`s interest in production issues and includes bringing farmers’ issues and perspectives to meetings where research and funding priorities are set. Laura can be contacted at lferrier@gfo.ca

Funding announcements for Canadian Agricultural Partnership approvals are made 45 days after the end of the application intake period. Farmers should not expect an answer regarding their applications before July 10th. The next intake period is August 7-28.

The next meeting will be held June 20th at 7:30am at Arthur’s Pub, Best Western Plus Inn, 930 Burnham Street, Cobourg

OSCIA Forage Masters Competition closes July 15 and they want to increase registration, so looking for help to promote the program.