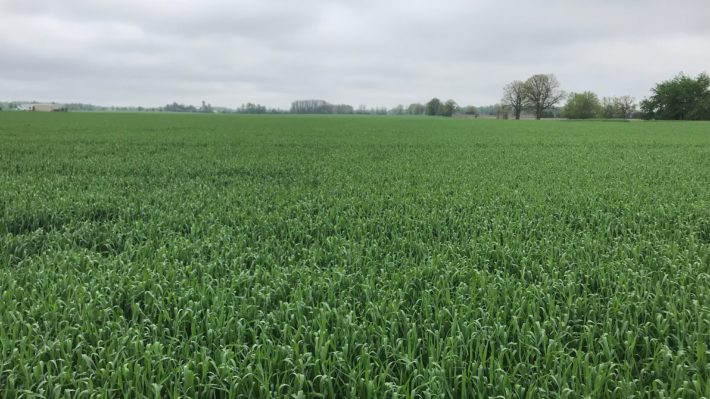 Thanks to Jeremy O’Shea (Pioneer) for chairing the meeting and to Alex Zelem (C&M) for sponsoring breakfast.

The next meeting will be Tuesday, June 11th starting at 7:00am for breakfast and 7:30 for the meeting.

Synopsis:  There was widespread rainfall over the weekend with most areas receiving 1 to 6 inches of rain on Saturday. It’s raining again today. Heavy downpours caused erosion and flooding around Parkhill, Tavistock, Lucan, and Embro just to name a few areas. Fields are saturated and there is little chance of field work until the end of the week. The spring of 2019 has been unprecedented with excess rainfall over such a large geography.  It has been the most challenging spring in living memory for many at the meeting.  There have been bad years in the past such as 1992 and 1983. However, in 1992 at least the corn was planted by early June. There are growers this year that have not been able to do any field work to date. Much of the US corn belt is also well behind in terms of planting. As of May 26th, only 58% of the US corn crop has been planted compared to a 5-year average of 90%. Only 29% of the US soybean crop has been seeded compared to a 5-year average of 66%. Ontario seeding progress is regional. In areas further north (Bruce, Grey) up to 70% of corn and 20% of soybeans have been seeded.  Considerable corn was also planted in Oxford county by the end of last week. Norfolk county is making good progress on the sand and some growers are finished planting. Huron county has about 50% of it’s corn planted and 5% of it’s soybeans. Regions with clay soils have not started planting. According to a survey by Corteva 43% of western Ontario corn is planted and 3% of soybeans are planted.

Fields planted 2 weeks ago are starting to emerge. Some fields that were planted at the end of last week were hit with pounding rainfall on Saturday. There is nothing that can be done to help these fields at this point unless a crust starts to form. Inter-row cultivation has been used in the past to get air back into the soil. Yield gains have been reported with inter row cultivation on consolidated or flooded fields.

Is it time to switch away from corn to soybeans? Although the crop insurance deadline in this area is not until June 15th some growers are not comfortable with planting corn past the first week of June. Several growers have already switched out of corn and it’s expected that if corn planting is not possible by the end of next week many growers will opt for soybeans. There was considerable discussion on how late corn can be grown successfully in this area. It really comes down to a level of risk a grower is willing to take. Some have had good luck with planting corn well into June other years. Keep in mind that although soybeans are well known for their ability to adapt to the growing season due to the photoperiod effect corn and wheat will also adjust to the season to some degree. It was also noted that we gain about 1 frost free day in the fall every 4 years so it’s difficult to compare this year to the 1990’s.  If a grower feels they may need to claim the unseeded acreage benefit they must contact Agricorp by June 15th.

This is the latest planting season across such a wide geography in living memory. Soybean yield potential is more stable than corn with respect to later planting so overall yield expectations are still strong. Although planting date studies show a 10% yield decline when planting is delayed to the first week of June this does not give a strong indication of what final yields will be in 2019. A good summer can still result in excellent yields. Soybeans are amazingly adaptive and will adjust to the growing season. A one-month delay in planting will only mean a 10-day delay in maturity in the fall. Soybean seeding rates should be increased by 10% by June 1st and increased up to 20% by the middle of June. This is to ensure that the canopy is closed as soon as possible to capture maximum sunlight and it also ensures a high number of pods/acre. High rates of manure have been applied in some fields with the challenging spring. If these fields will now be shifted to soybeans keep seeding rates lower to reduce the chance of lodging and white mould. See the article Is it Time to Switch to Earlier Maturing Soybean Varieties for information about switching to shorter season soybeans when planting is delayed.

There is concern that fields with corn herbicides applied may have to be switched to soybeans due to the weather.The University of Guelph has evaluated soybean response to being planted at various intervals after corn herbicides have been applied, a summary of the results along with the scientific manuscript can be found at:

Horsetail is a common weed this year. The backbone of any herbicide strategy in corn or soybeans to control horsetail is Broadstike RC. High rates of glyphosate will have some impact, but control is often disappointing. There are many bio-types across the province so differences in glyphosate susceptibility is suspected. In winter wheat MCPA was suggested. Wild buckwheat, spreading atriplex, bluegrass and fleabane are also common this year. Bluegrass is controlled well by glyphosate but since a second flush can occur quickly glyphosate by itself may not appear to be adequate.  Zidua SC or Focus herbicide in corn and Simplicity DoDRI herbicide in wheat can be effective. To control red clover a group 4 herbicide should be in the tank mix. A fall herbicide application is much more effective than spring termination. 2-4D is not as effective as Dicamba.  Do not use Eragon before edible beans.

The winter wheat crop is progressing in the area and is approaching or at the flag leaf stage.  Herbicide application windows are now closed for most fields.  There are reports of growers now choosing to keep their questionable wheat stands to help spread the workload as corn and soybean planting progress continues to be delayed.  Cereal rye being grown for forage is now being cut.  Growers are being challenged to cut the crop before it gets too mature as quality begins to decrease quickly after the flag leaf stage.  Winter barley is beginning to head out, but heads are appearing to be quite small.

The winter wheat crop is progressing in the area and is approaching or at the flag leaf stage.  Herbicide application windows are now closed for most fields.  There are reports of growers now choosing to keep their questionable wheat stands to help spread the workload as corn and soybean planting progress continues to be delayed.  Cereal rye being grown for forage is now being cut.  Growers are being challenged to cut the crop before it gets too mature as quality begins to decrease quickly after the flag leaf stage.  Winter barley is beginning to head out, but heads are appearing to be quite small.

With the prolonged wet conditions, the risk of fusarium infection is likely to be high this year.  While many will be busy with corn and soybean planting once things dry up, it is important to keep an eye on the staging of the wheat crop so that timely T3 fungicide applications can be made.  Stands with variable maturity should target T3 fungicide applications when most of the field is at the correct staging.  Stripe rust has been found in one field on one leaf in the Wingham area.  Continue to monitor fields as we approach the T3 fungicide timing to ensure no other diseases get away on you.  Physiological fleck has been found in some wheat fields.  If it is cloudy for an extended period the wheat leaf cuticles can be thin, and when conditions turn sunny free radicals form in the leaf and cause flecking. The flecking can be variety dependant and does not cause yield loss when it is minimal or occurs at the flag leaf stage and beyond. If the leaf turns completely brown there can be significant yield loss.  Flecking is typically more uniform across the field than diseases, and diseases start at the bottom of the plant and move upwards unlike flecking.  There was also discussion on the impact of the lack of sunlight on wheat yields.  The lack of sunlight is not an issue until anthesis and the two weeks following that when the number of florets are determined.  The crop is still running at 80% efficiency on cloudy days.  Copper deficiency was found in one wheat field on the sandy knolls.  Copper deficiency is uncommon in Ontario wheat production.

The amount of winter kill to forages this winter has been phenomenal. Forage seed supplies are tight this spring. There continue to be reports of strong hay and straw prices at auction.  Corn stalks were baled last Friday. The nutrient removal from spring baled corn stalks is low at only about ¼ cents/lb. Fall baled corn stalks have 40% more nutrients. Shortages in forage will need to be addressed with the production of annual forages. 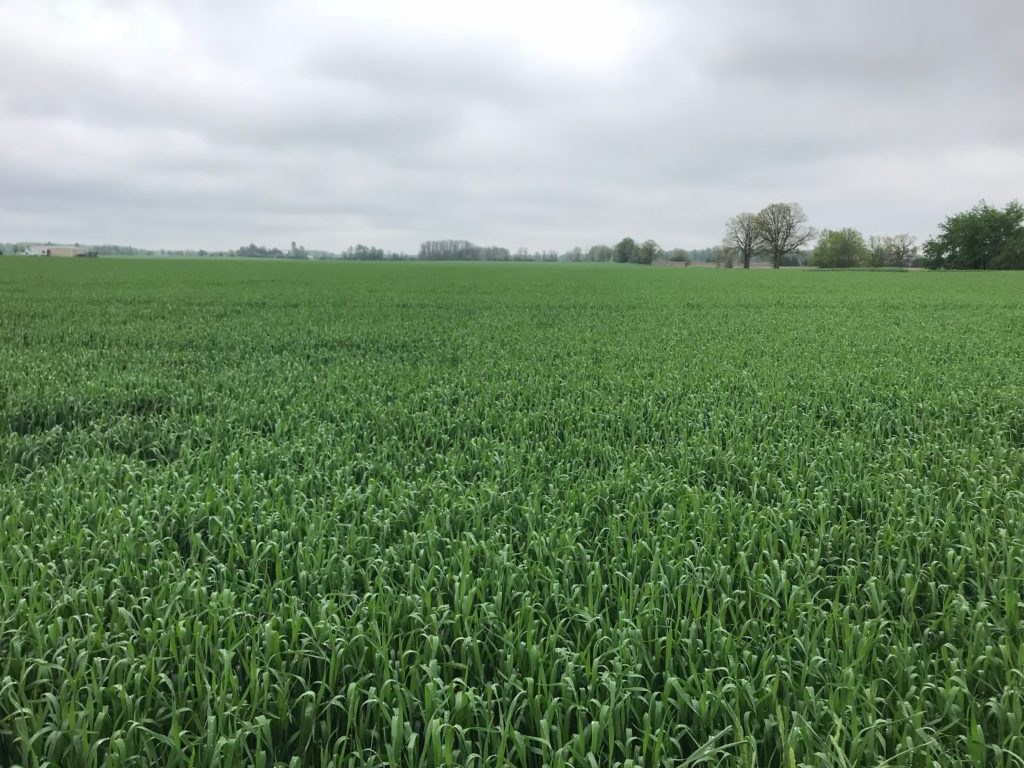