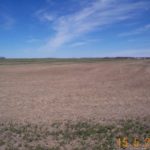 It is sometimes difficult to know what to do when winterkill completely takes out your alfalfa stands or leaves them patchy and unhealthy. There are many options that can be considered, depending on the calendar date, timing, urgency for feed, and forage yield and nutrient quality requirements.  If winterkill is identified early, the best option is usually to replace the winterkilled stand by seeding a new forage stand in a new field in the crop rotation. Growing corn in the winterkilled alfalfa field allows you to utilize the 110 kg/ha (100 lbs/ac) nitrogen credit, in addition to the 10 – 15% yield benefit that corn receives following alfalfa in the rotation.

Identifying alfalfa winterkill problems early in the spring allows for more options. It is important to walk and dig some plants to determine plant health and yield limitation. For details on what to look for and how to make the decision to reseed or make the most of what you have, refer to “Assessing Forage Stands For Winter Survival”. (fieldcropnews.com/2013/04/assessing-forage-stands-for-winter-survival/)  “Frost Heaving of Alfalfa” can also sometime also be an issue. (fieldcropnews.com/2013/04/frost-heaving-of-alfalfa/)

If you decide to keep a stand that has moderate stress from winterkill or fall cutting, allow plants to mature a bit longer before cutting. Delayed harvesting of stressed alfalfa will compromise forage quality, but allows plants to restore carbohydrate levels and will increase long-term stand survival.

In most cases, if winterkill is identified early, the best option is simply to replace the winterkilled stand by seeding a new forage stand in a new field in the crop rotation. Corn can follow the winterkilled alfalfa to take advantage of the N credit and rotational benefit.  A direct seeding can be done, or use a companion crop such as cereals or cereal-pea mixtures. Use good agronomic practices to maximize establishment year yields.  Optimum seedings dates are as soon as a seedbed can be prepared in the spring, ideally before May 10 for most of southern Ontario.

Because of alfalfa autotoxicity and the likely presence of soil-borne fungal alfalfa disease, do not reseed alfalfa into a winterkilled alfalfa stand, unless the winterkilled stand was seeded the preceding spring. Autotoxicity reduces the germination and growth of new alfalfa plants for the life of the stand. Autotoxicity compounds are not present the first year, so reseeding a failed new seeding is OK. Similarly, do not attempt to repair a thin alfalfa stand by interseeding alfalfa. Refer to “Alfalfa Autotoxicity” (fieldcropnews.com/2013/04/alfalfa-autotoxicity/).

If an alfalfa stand is uniformly thin or weakened but the grass content is good, the application of nitrogen (N) can significantly increase yields as well as the forage protein level. In situations where grass hay is preferred over alfalfa, N application easily pays for itself.  Healthy stands of productive cool-season grass species (such as orchardgrass, bromegrass, timothy, tall fescue, etc) can have a significant yield response to large amounts of N to optimize yield. (Figure 1) Research shows that 1 lb of N can yield an additional 25 – 40 lbs of hay. In other words, if we value hay at a very modest 8¢/lb, applying 1 lb of N worth 70¢ will result in an extra 25 – 40 lbs of hay worth $2.00 to $3.20.

As a general rule, 60 lbs/ac N should be applied to stands with one-third to one-half legume. For stands with less than one-third legume, nitrogen recommendations have been developed using growth response (yield) curves to various N rates and nitrogen / hay price ratios. Assuming urea at $675/tonne and hay at a modest 8¢/lb, current nitrogen / hay price ratios are about 10:1. (Table 1)  These rates reflect optimum conditions of a uniform, vigorous grass stand with no other yield limitations, such as lack of rainfall, low P and K, bare patches, excessive weeds, or a delayed application. Nitrogen rates for less productive stands should be adjusted downward accordingly. For many stands this spring, an intial application of 90 lbs/ac N may be optimum. (“Apply Nitrogen To Grass Stands To Increase Yield” https://fieldcropnews.com/?p=6830)

Nitrogen applications on hay fields should be split for optimum response. The first application should be made just as the grass is starting to green-up, early in the spring. If rain is not limiting, a second application can be made right after the first-cut, and a third application after the second-cut. 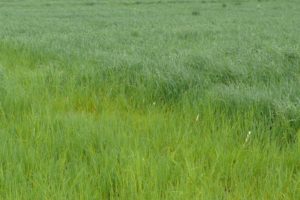 Corn is typically the highest yielding emergency forage crop, with high digestible energy and quality. Growing corn silage can utilize the 110 kg/ha (100 lbs/ac) nitrogen credit following winterkilled alfalfa, in addition to the 10 – 15% yield benefit that corn receives following alfalfa in the rotation. A potential disadvantage of corn silage as an emergency forage is that it does not provide any immediate forage supply until harvested in the fall. As well, some farmers may not be set up to store or feed corn silage.

As an emergency forage crop, there are two options to managing corn silage. The best option is to kill (by burndown or plowing) the alfalfa stand and then planting a full season hybrid at a normal time. This maximizes silage yield and nutrient quality. Double cropping by planting corn silage after the first-cut of a damaged alfalfa stand can provide some forage to fill short term needs, but this comes at the significant risk of reduced corn silage yield and quality (reduced grain/stover ratio). This approach can be very disappointing if spring growing conditions and early summer rainfall are insufficient. Similarly, no-tilling corn into an alfalfa sod rather than plowing is more risky without adequate rain. Refer to “Corn Planting Following Early Hay Harvests”  (www.omafra.gov.on.ca/english/crops/field/forages/corn_earlyhay.htm).

Where winterkilled areas are large and patchy, some farmers prefer to attempt to repair these areas by no-tilling in red clover and/or Italian ryegrass. Red clover and/or annual ryegrass are difficult to dry for hay, but can make quality haylage. However, the best option is often just to seed a new forage stand in a new field in the crop rotation. Do not interseed alfalfa into an alfalfa stand because of autotoxicity and disease, unless the stand was seeded the preceding year.

Ryegrass establishes quickly and grows well when seeded early, but does not do as well during hot, dry summer conditions. Because Italian ryegrass does not head and Westerwold annual ryegrass does, Italian ryegrass is higher forage quality, but more difficult to dry. Red clover establishes a bit faster than other legumes. Refer to “Red Clover Haylage” (fieldcropnews.com/?p=6605) and “Annual Ryegrass For Stored Feed” (www.omafra.gov.on.ca/english/crops/facts/98-039.htm).

Cereals and cereal-pea mixtures are commonly grown as a forage silage crop, either as a companion crop to a forage underseeding, or on their own. If planted early in the spring with adequate rainfall, these cool-season crops grow rapidly to help replace the loss of winterkilled first-cut alfalfa. Nutrient quality is dependent upon stage of maturity at harvest, starting out very high at the boot-stage, but declining rapidly and significantly by the early-dough stage. This can be a quality issue if a “rain delay” occurs when you need to cut. Of course, yields increase significantly with maturity. High moistures, heavy windrows and adequate wilting can be issues, particularly with early-cut stands that contain peas. This can challenge proper fermentation, and can damage underseedings if left in a windrow for extended periods of time.

Oats are the most common forage cereal, followed by spring triticale, spring wheat, and barley. They have similar nutrient quality at the same stage of maturity. Adding peas to a cereal will increase forage quality with higher crude protein (3 – 4% points), digestible energy, and potential feed intake, but often do not significantly increase yield. Pea seed adds to the cost, and can sometimes be difficult to buy. Triticale is less competitive than the other cereals when mixed with peas, so the resulting pea content is usually greater with higher protein and energy. Refer to Forage Production From Spring Cereals and Cereal-Pea Mixtures www.omafra.gov.on.ca/english/crops/facts/98-041.htm.

Warm-season annual forage crops include sorghums, sorghum-sudans, BMR sorghums, pearl millet and Japanese millet. They yield very well and provide forage earlier in the season than corn silage, but are lower yielding than corn silage. They do best in hot summer weather with adequate moisture, but are also more drought tolerant than other forage species. They can be harvested as haylage or baleage with conventional forage equipment. Because they are very frost sensitive, they should not be planted until late-May to avoid the risk of frost. They are killed easily by frost in the fall. Prussic acid can be a potential issue with sorghums, but not millets. Prosso millet does not do as well on heavier soils.

Alfalfa mixtures seeded in August can be treated as established stands the following year with a full yield potential. The biggest risk of summer seeding forage is lack of moisture after seeding. Do not use companion crops with summer seedings. Seeding after winter wheat is harvested can be a good opportunity if competition from volunteer wheat can be managed. Some light tillage to encourage the grain to germinate followed by a burndown with glyphosate or a second cultivation 10 days later will destroy much of this grain. Refer to “Summer Seeding Forages” fieldcropnews.com/2012/05/summer-seeding-forages/

Double cropping by seeding annual forages such as cereals, cereal-pea mixtures, and sorghums in late-July or early-August following wheat for an early-October harvest can be a useful low-cost option for extending forage supplies. These annuals can make good feed when harvested at the correct stage of maturity and made into silage or baleage. The challenges can sometimes be lack of adequate moisture in August, and having dry enough weather in October for adequate wilting. When seeded early (before mid-July), sorghums and millets grow quickly and well, but when seeded later they often encounter frost issues before harvest. Cereals are more frost tolerant in the fall than sorghums so after frost they can continue growth, maintain their quality longer and provide a wider harvest window. Oats are the most commonly grown summer seeded cereal, and are sometimes mixed with peas. Refer to “Summer Seeding Oats For Extra Forage” fieldcropnews.com/2012/07/summer-seeding-oats-for-extra-forage/ and “Summer Seeding Oats For Extra Forage – 2012 Recap” fieldcropnews.com/2012/11/summer-seeded-oats-for-extra-forage-2012-recap/.