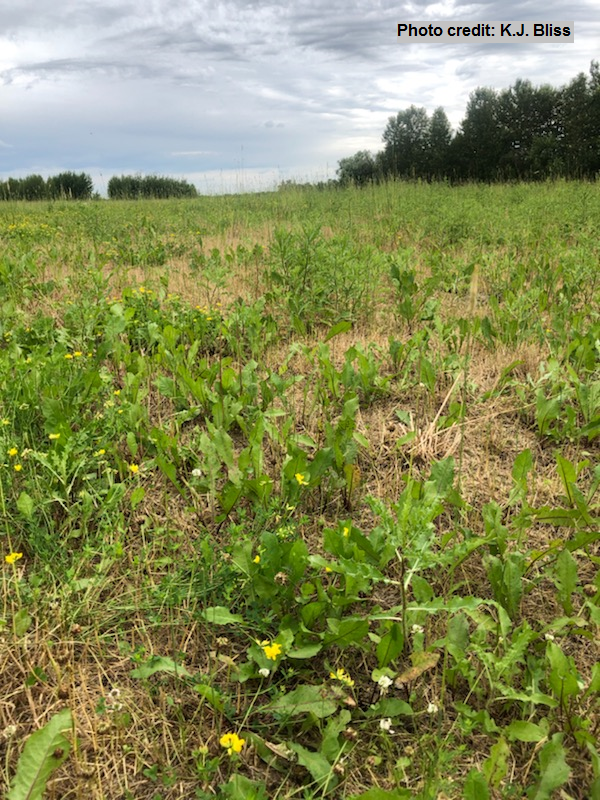 Christine O'Reilly July 25, 2019 1772 Comments Off on Are insects eating your forage crop?
Forages

Reports are coming in about insect pressure in forage crops and pastures across the province. Central and eastern Ontario currently have high potato leafhopper pressure, while districts across northern Ontario are challenged by armyworms. The only way to know if a field has insect pressure is to scout it! More information about scouting forage crops can be found in OMAFRA Publication 811: Agronomy Guide for Field Crops. Where thresholds have been exceeded, Publication 812: Field Crop Protection Guide has information on insecticide options.

Potato leafhoppers (PLH) are lime green, wedge-shaped insects that are up to 3 mm (1/8 in.) long (Figure 1). Unlike other insects, they can move sideways or backwards as fast as they can move forwards. They are easy to confuse with aphids, who are rounder (pear-shaped), often a darker green, and have legs that are visible from above. PLH overwinter in the southern United States and blow into Ontario on storm fronts, typically in late May or throughout June. PLH are spread by the wind, so large regions tend to have PLH pressure; this pest is not isolated to individual fields.

PLH suck the juices out of alfalfa leaves. A compound in their saliva closes off the xylem and phloem, preventing nutrients and water from moving around the plant. This stunts the alfalfa. PLH feeding causes a characteristic yellow V shape on the tips of leaves. By the time these symptoms appear, stunting has already occurred, and the crop will not grow any more (Figure 2). “Hopperburn” is commonly confused with stress from dry weather or boron deficiency.

PLH populations increase rapidly, so producers should scout their hay crops every 5-7 days until the first killing frost. To determine whether PLH pressure is high enough to justify control, sweep in a 180° arc with a 15” diameter net and count the number of PLH captured. Take 20 sweeps from five areas of the field, avoiding field edges. The number of PLH considered threshold for control varies with the height of the crop (Table 1). For PLH-resistant alfalfa varieties in a production year, the threshold is four times higher. If a net is not available, a baseball cap is roughly 1/5th the surface area. Be sure to close the cap tightly after a sweep, as PLH will jump out before they are counted.

To control PLH the alfalfa must be cut. This takes away the insects’ food source and stimulates new growth in the alfalfa. Depending how tall the crop is, producers need to decide between taking the crop as forage or leaving it cut in the field. Either way, scout the field five days after cutting to determine if the population has fallen below threshold. If the population is still above threshold, spraying is warranted to protect the new regrowth.

There are several products labelled for control of PLH on alfalfa forage crops. Matador and Silencer (Group 3) have the same active ingredient, but neither of these products are effective when temperatures are greater than 27°C. Cygon and Lagon (Group 1B) are older products that are effective on PLH but cause more harm to beneficial insects than newer chemistries. Sivanto Prime (Group 4D) is another option to control PLH. Always read and follow the label: the label is the law!

True armyworms have white-bordered stripes running length-wise along their bodies. Their most distinguishing feature are dark diagonal bands at the top of each abdominal proleg (chubby back legs). True armyworm may vary in colour from green to reddish brown (Figure 3). Armyworms prefer to eat grasses and cereals, and in high enough numbers can eat an entire forage crop (Figure 4). Unlike PLH, armyworms crawl from field to field searching for food, so individual fields can be infested.

Scout every four days to prevent armyworm invasions. Armyworms do not like the heat of the day, so the best time to scout for them is at dawn or dusk. Examine ten areas of the field, paying attention to border areas next to fields with host crops. Control is warranted when five or more armyworms smaller than 2.5 cm (1 in.) are in a 30 cm x 30 cm (one square foot) area. In new seedings, two or three armyworms per square foot may warrant control.

Before spraying for armyworms, check whether they have white eggs attached to their backs. If so, the armyworms have already been parasitized and will be controlled by the parasitoids; remove these armyworms from the count when determining thresholds. Also ensure that the armyworms are smaller than 2.5 cm (1 in.) before spraying, as insecticides are not effective on large armyworms. Coragen (Group 28) is labelled for control of armyworm on forage crops and pastures. Always read and follow the label: the label is the law!