This spring is starting out with generally favourable weather, particularly when compared with last year. The winter months were also less harsh, resulting in fewer issues with winterkill in forages and winter cereals. Heavy rains and subsequent cold temperatures in the last few weeks have resulted in some kill in depressions where ponding occurred.

In the last few days many have found soil conditions fit for some field work, though this has been limited primarily to fertilizer and manure spreading as soils have generally remained just too moist for tillage. This is concerning for some, as there were few opportunities to perform regular fall tillage after a difficult 2019 harvest. Some people may be considering this as an opportunity to try no-till soybeans. Keep in mind that successful no-till is strongly dependent on proper planter setup and maintenance, and good monitoring is recommended to make sure that desired planting depth is being achieved. Conventional planters often lack the weight or down force necessary to match actual planting depth to depth gauge settings.
Daytime soil temperatures have hovered around a high of 7-8°C over the past week, but overnight lows are still down to 1-2°C . Combined with the recent snow it’s clear that peak planting season is still at least a week or two away.

While a few damage reports have been submitted, last year’s new seedings have largely made it through the winter in excellent condition and any damage is mostly limited to ponded depressions. 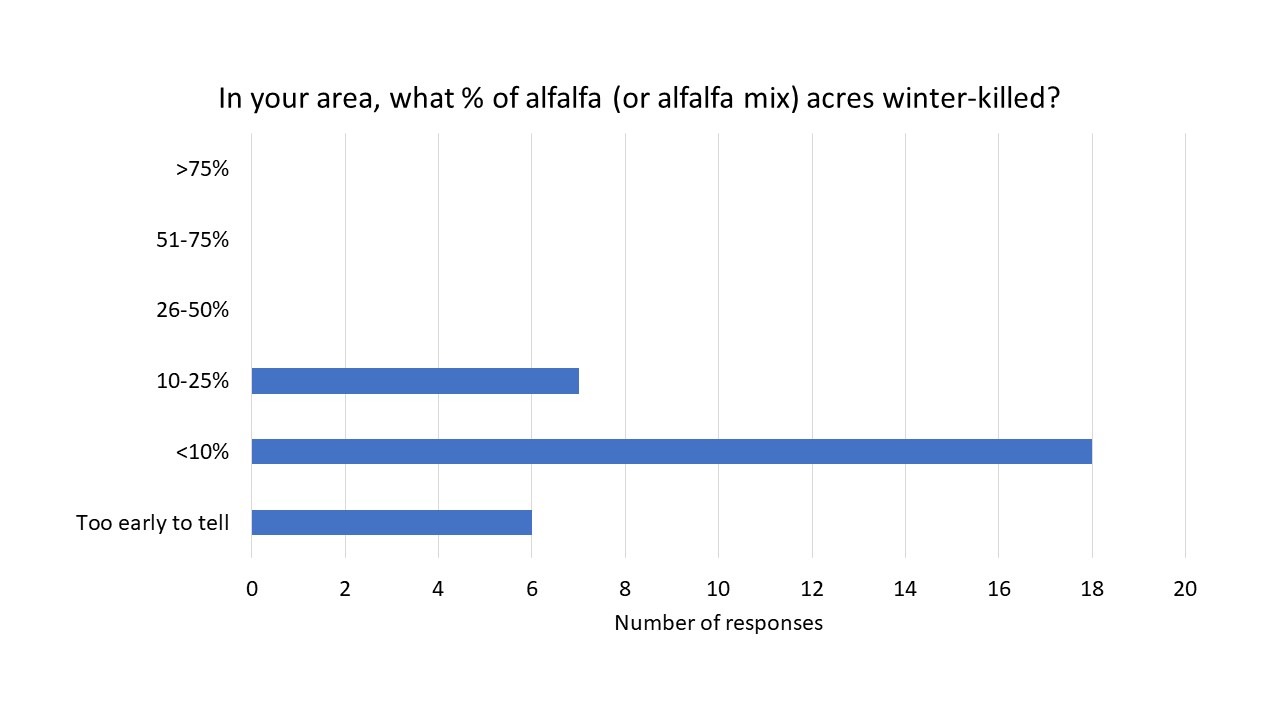 Forage inventories are tight in many areas, so more acres are expected to be planted, and alternative forages are being considered. Several growers seeded cereal rye last winter for forage and are happy with the way it looks.

Grass hay fields are receiving nitrogen fertilizer. If a hay field contains less than 33% legumes, yield will be improved by applying 23 kg N/tonne of expected DM yield. If the field has between 33-50% legume content, 60 kg N/ha (55 lbs N/acre) can be applied in early spring to improve yields. Pastures can be given nitrogen in the same way as hay fields, but this will exaggerate the “spring flush” and can make maintaining quality difficult. If excess pasture growth cannot be harvested as hay, consider only applying N to whichever third of the pasture acres is ready to be grazed first.

Winter wheat survival has been promising. Agricorp has received only 10 damage reports from Eastern Ontario to date, though that number is expected to increase with scouting. Most of the 166 damage reports received across the province by last Friday were from southern Ontario on heavy textured soils. Generally, only small pockets of damage are reported. This is good news, as planting was somewhat on the late side in eastern Ontario. The picture is different on heavier, poorly-drained soils where heaving and ponding have taken a toll. However, this represents a limited number of acres. 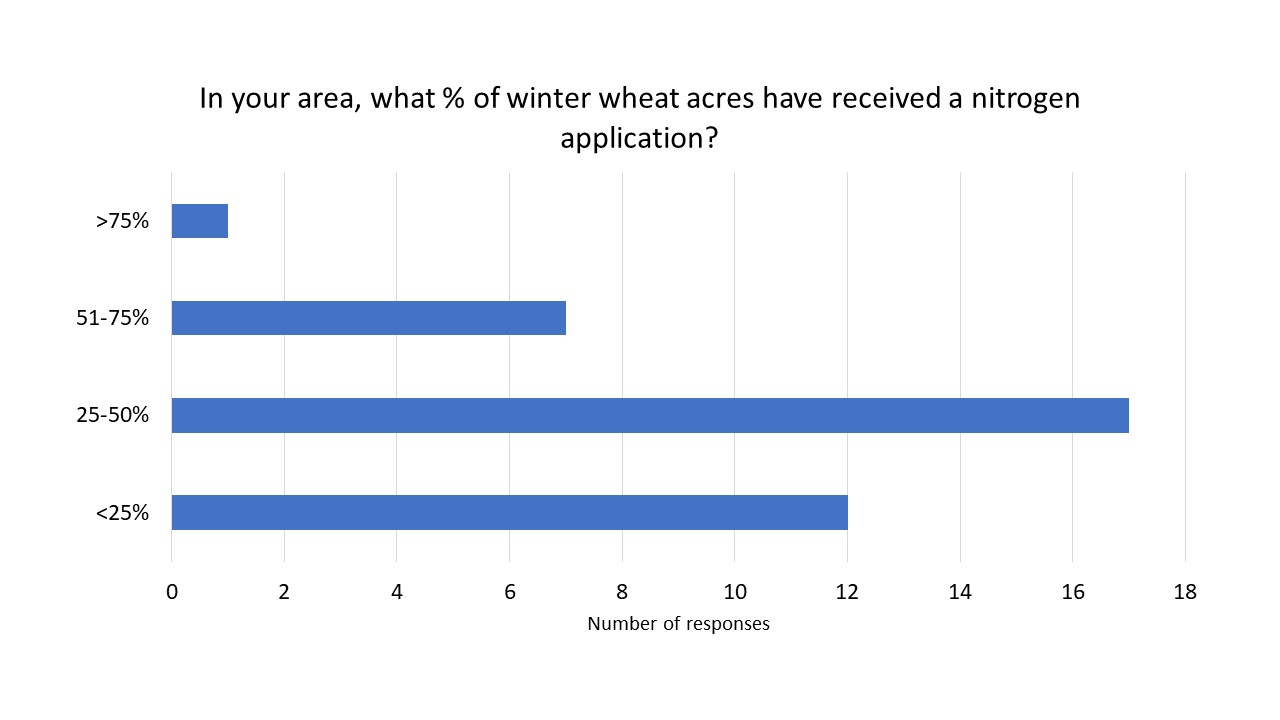 Nitrogen applications are in full swing. About 50% of fields have received nitrogen across the region, though in certain areas progress is only around 25%. 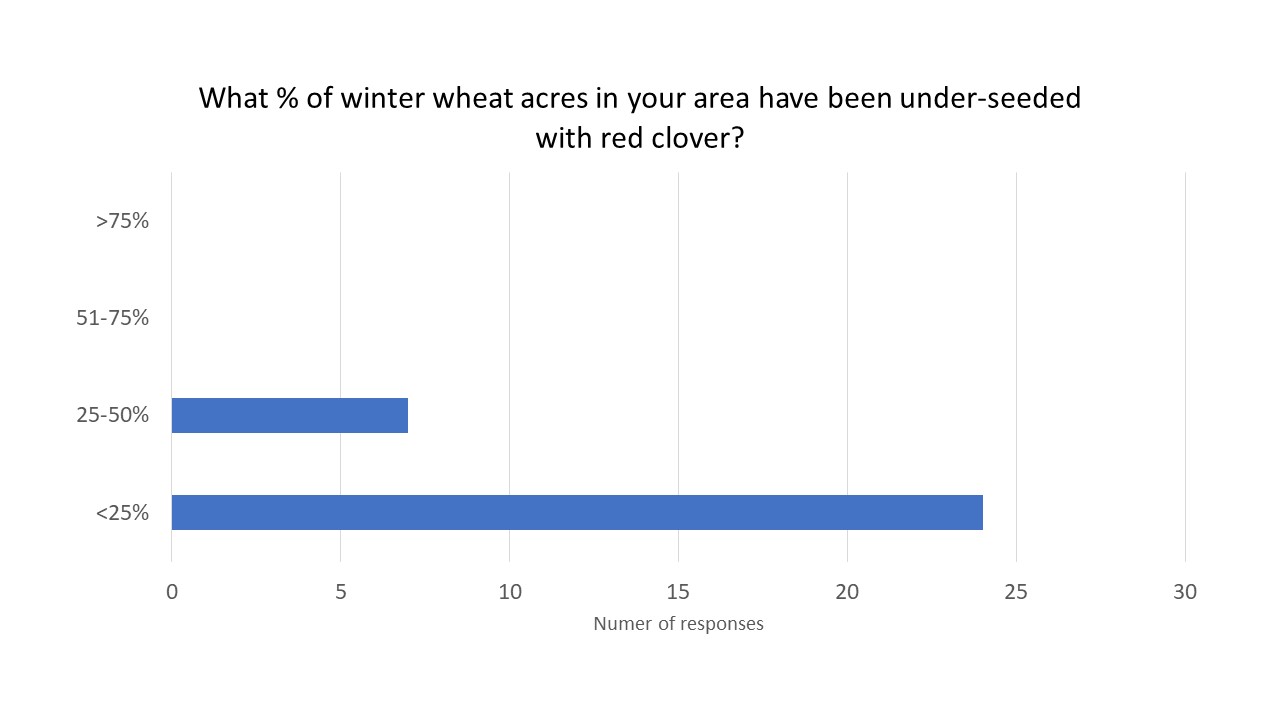 A good visual resource for staging wheat using either Feekes or Zadok’s scales, is available from University of Wisconsin-Madison Extension.

Retailers are noting that sales of spring cereal seed are up, probably reflecting the need for straw and forage. Most sales have been of spring wheat, though barley is attracting significant interest in some areas. Seed supplies are good but diminishing, with some suppliers already sold out of certain spring wheat varieties. Growers are reminded of the importance of having a purchase agreement in place for the harvested crop. Ensure management practices are used to optimize performance of these crops including timely planting, fertilizing and pest control including fungicides

Reports of intended corn acres were conflicting, with some reporting increased planting intentions while others are intending to plant fewer acres, mostly in favour of spring cereals. In general seeded acres will likely not vary significantly from normal.

Fertilizer is starting to be delivered, but planting is not expected to get underway for another week or two.

Not all Bt corn hybrids have been approved for importation to European Union. Those hybrids not approved can not be shipped as grain or used in processed products destined for import to Europe. To check if your hybrids has received EU approval, talk to your seed dealer and/or click on your hybrids in the Canadian Seed Trade Association’s corn hybrid database at: seedinnovation.ca/hybrid. Hybrids with EU approval will have a checkmark under the EU approval column. Growers should check with their elevator or delivery point to make sure they hybrids grown will be accepted for their intended market.

Though soybean fertilizer is being delivered and applied, there was only one report of planting in the East, which is quite early. Management of early and “ultra-early” soybean planting was discussed. The group agreed that early soybeans should be planted at 1” but definitely into moisture to get them out of the ground and growing rather than risking a crust. “Ultra-early” soybean planting is generally not an attractive option for the risk-averse in eastern Ontario. The average last frost date for most of eastern and east-central Ontario is between May 3rd and May 11th. However, if early planting is necessary to spread the workload of many acres, soybeans can be a better option than corn largely because soybeans tolerate poor plant stands better than corn. Most agronomists agree that soybeans can be planted in the same planting window as corn assuming that the ground is fit. More information on identifying and mitigating the risks of “ultra-early” soybean planting can be found in this article by extension specialists from Michigan and Ontario, as well as in this interview from Real Agriculture with OMAFRA Soybean Specialist Horst Bohner.

If planting early, increase plant populations. Agronomists agreed on a range between 130,000 and 200,000 seeds per acre. Even if emergence or other issues reduce the stand to 100,000 plants per acre, early-planted soybeans will have a chance to “bush out” and compensate.
Retailers noted more interest in IP as well as Enlist soybeans for this season.

Chickweed is present in some winter wheat fields. Typically the best time to control chickweed in winter wheat is in the fall. Weather conditions, along with crop and weed staging will dictate time of spring herbicide applications in cereals. Cool temperatures generally reduce herbicide effectiveness and increase the risk of crop injury and so there is little to be gained by applying under such conditions.

The presence of glyphosate resistant Canada fleabane in eastern Ontario fields is increasing. There are several effective options to control this weed in corn and soybean. In soybean, applying effective pre-plant herbicides are critical for minimizing the economic impact of this weed. Dr. Peter Sikkema’s trials (University of Guelph, Ridgetown) have shown that one-pass “burndown” applications providing nearly season long control of fleabane (when applied at appropriate weed stage) are glyphosate + Eragon + Sencor 75DF (215 g/acre) in all types of soybean cultivars, or glyphosate + Eragon + dicamba for Xtend soybean cultivars.

The first instance of glyphosate resistant waterhemp was detected in eastern Ontario (Northumberland County) during the 2019 season. The seed from this weed can easily spread by farm machinery and human activity. Similar to Canada fleabane, a number of effective products exist in corn and cereals, but in soybeans there are fewer options, and effective soil applied herbicides are necessary. Control options from research by Dr. Peter Sikkema were summarized in the April 7 Ridgetown-Simcoe breakfast meeting minutes. Refer to OMAFRA publication 75A (Guide to Weed Control) and the pestmanager app for management options for these and other weeds.

A new Guelph-based diagnostic lab will be offering molecular pest identification and herbicide resistance testing with a 2-3 business day turnaround. A list of herbicide resistant testing options and contact information can be found in the table below.

Table 1. Weed species, herbicide group/herbicide that can be tested for resistance by Harvest Genomics Laboratory 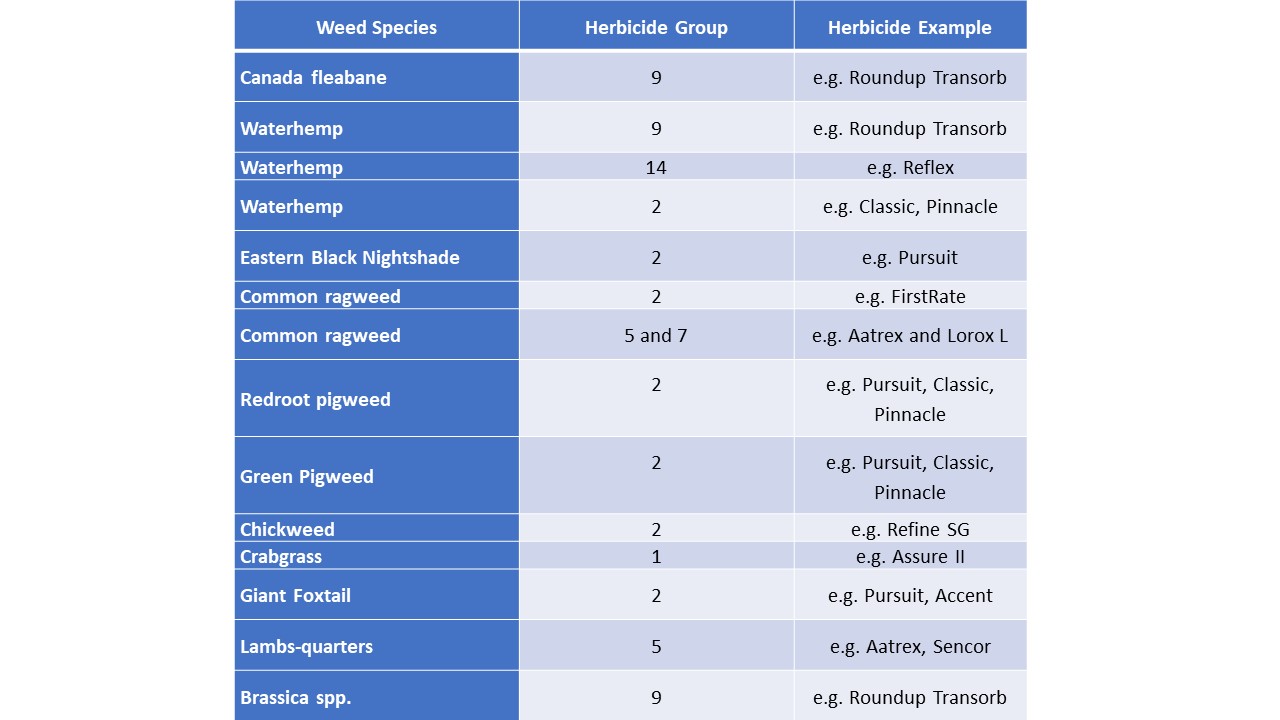 As attention to sulfur fertility grows, some are considering using ammonium thiosulfate (ATS) as a carrier for herbicides. Mike Cowbrough, OMAFRA weeds specialist has conducted some tests that indicate possible issues when mixing herbicides with ATS. A jar test of your intended mixture is a quick way to preempt these issues and remember that the order of operations is important. More information on this topic can be found at https://sprayers101.com/loading-jartest/

Those concerned about pesticide safety licenses set to expire this year will be relieved to know that they will be carried over through December, 2020. If you do not yet have a license or it is currently expired and you need to take the certification course, the Ontario Pesticide Education Program (OPEP) is delivering online courses. Visit www.opep.ca and select “Online” as the course location.

Agricorp is reminding clients to call in damage as they see it, preferably by email to contact@agricorp.ca. Agricorp has updated their website to allow easier crop damage reporting electronically.

Forage rainfall premiums are due May 1

Adjusters are not entering fields at this time, but Agricorp is working on protocols to allow work to continue. Updates will be posted on their website at www.agricorp.com.

Retailers and other service providers have all developed and implemented protocols to incorporate public health guidelines around social distancing. Specific rules may vary around delivery, notice for pickup, and ordering. Most product was already in the country before COVID-19 lockdowns and has been shipped to retail outlets. No impact on supply is expected beyond a reduction in social visits.

Clean Farms Ontario collections have been postponed until July 1st, 2020. Check the website for updates here.

Ethanol production in the province is reported to be down 25-50% in general as inventories are building due to reduced gas consumption. Growers with contracts or considering deliveries are advised to call ahead.

Summer student and research plot protocols are being put into place by consultants, companies, universities, and the public service. Companies looking for guidance on developing their own protocols should refer to public health authorities and consult with their colleagues in the industry.

The federal government has made changes to the Canada Summer Jobs Program and provided business support. Details are available here. Interest-free and partially-forgivable loans are also available to companies with payroll under $1 million through financial institutions. Stay safe, support each other, and please continue to report issues with supply chains, logistics, and licensing to your OMAFRA and AAFC contacts.

Next breakfast meeting for our combined regions is scheduled for Wednesday, April 29th.