The topic of conversation this week is “cold conditions”. Temperatures were well below seasonal for much of the past week due to the presence of an arctic air mass. Night-time temperatures reached as low as -8⁰C in some parts of southern Ontario. Many parts of the province experienced low temperatures between 0 and -4⁰C and snow accumulated in many regions.

Some winter wheat fields have not yet had a second application of nitrogen where split applications were planned. In some cases, the wheat is not advanced enough for the second application yet. When there is frost on the plants or where frost is expected, do not apply 28% nitrogen as there will be “massive burn”. The 28% should be applied when leaves are dry, unless it is raining at the time of application.  That said, if temperatures are cool but there is no frost nitrogen applications should not cause much burn. Some participants noted 2012 was a similar year and burn was not observed. There could be some injury where fertilizer passes overlap. There may be some variety differences, which may be due to differences in leaf cuticle thickness.

There was a question asked about applying nitrogen to heaved fields where the seeds, roots and crowns are exposed. While no hard evidence was presented, participants shared that they do not think nitrogen applications will cause much injury. Streamed 28% may cause some injury if it touches the roots, but it is expected this would be minimal.

Freezing temperatures are a concern for advanced wheat. If wheat is in the boot stage it can only tolerate low temperatures of -1 or -1.5⁰C. Damage will not be evident for about two days. Slice open the main stem and look for water-soaked heads, loss of turgor, or some change/dulling of colour within the stem. Sometimes the main stem will be lost but the tillers may not be affected. When the main stem (apical dominance) is lost, the plants may produce more tillers and produce reasonable yields. A few days after the cold event you may see tillers elongate but the main stem will not.  Producers should wait for warmth and growth to evaluate how the wheat survived cold temperatures. See an article HERE on cold temperatures in wheat.

A participant asked if there is value in spraying herbicides in wheat if the canopy is closed or nearly closed. Data on spraying for annual weeds at this stage has not resulted in compelling evidence that yields will be increased. Weed control may have value for ease of harvest and improved straw quality.

Agricorp stated there have been 585 damage reports in wheat; most were reported in April. Counties with the most reports are Lambton, Essex, Middlesex, Huron and Chatham-Kent. May 1st was the deadline to enroll or change coverage for corn, soybean and wheat.

The majority of corn acres are planted, with some regions nearing 100% completion. See the poll results below. Most corn has not emerged yet because of cold conditions. It requires approximately 180 CHUs for corn seedlings to emerge.. Corn planted April 6th in Oxford county is poking through the soil but is not fully emerged. Corn planted April 25th was observed last week to have a 1.5” root and starting to sprout but again, it was not fully emerged. Another example of early April planted corn in described in the image below.  2018 data from Pioneer trials in the US have shown that corn seed in cold soil (4 to 7ºC) for 5 to 7 days after planting reduced corn stand establishment by 10 to 33%. 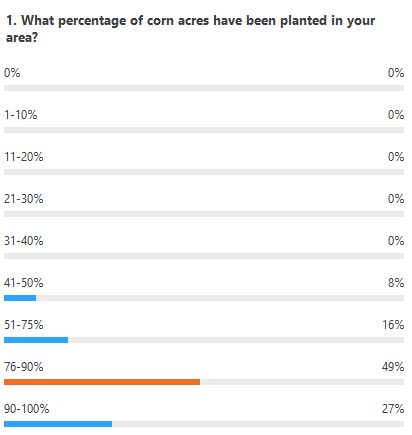 Planting progress is slow because producers are waiting for warmer temperatures. Most participants indicated planting progress is at about 10% complete. See the poll below on percentage of soybean acres planted. Soybeans planted April 22nd have not emerged. They are not showing signs of injury yet but are stressed from sitting for 3 weeks and need heat to emerge before they completely run out of steam. 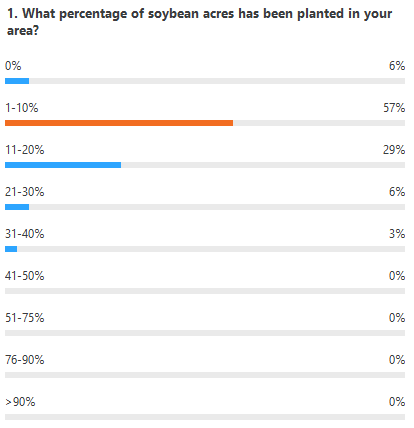 The “million dollar question” is whether producers should be planting this week when conditions are cold and rain is expected on Thursday. Usually one does not worry about soil temperatures in May but this year is extreme so it is not a simple question to answer. Some years temperatures will drop below zero, but the forecasted -5⁰C at night and 3⁰C during the day is not typical. Planting at these temperatures brings risk of reduced vigor and slow growth, which producers must weigh against late planted soybeans if there is rain over the next couple weeks. Producers should make decisions on a field-by-field basis. For fields that take longer to dry out after rain, producers may choose to plant now ahead of forecasted rains. If you plant today and the temperature dips as low as -7⁰C, which is forecasted in some areas, there may be a reduced stand.

Soils have been dry and fit for planting. Dry soils generally warm faster than wet soil, so the relatively dry conditions have resulted in soil temperatures going up and down more than would be expected for wet soils. Sandier soils have greater temperature fluctuations. Generally, soils should be above 5⁰C at planting or higher. Following the cold snap mid-week temperatures are much warmer so the majority of beans will be planted in warmer conditions going forward, but (warm) rain is expected through the Victoria Day long weekend.

The group discussed the efficacy of “burn down” herbicide applications in cold conditions and ahead of forecasted rains this week. Systemic herbicides like glyphosate and Group 4 products are likely to be slower acting in cold temperatures, but often result in good weed control at 4 to 6 weeks after application. For contact herbicides like Aim, Blackhawk and Eragon, weed control may be compromised by cold conditions. There may be some antagonism with tank mixes sprayed in cold conditions, specifically glyphosate antagonism when mixed with clay-based products such as atrazine and metribuzin. Soil-applied, residual herbicides may cause increased crop injury under cold conditions but the length of residual control is not likely to be reduced. Generalizations about herbicide activity and risk of injury under current weather conditions cannot be made; speak with your agronomist about each specific product.

The group discussed a unique scenario where soybeans are being planted to a field where red clover had been seeded. See the article HERE for some detail on controlling red clover in soybeans. Red clover emerging within an emerged IP soybean field will be difficult to impossible to control. However, late emerging clover should not be overly competitive if the soybean canopy has closed.

Nearly all canola has been seeded in the “southern” part of the spring canola growing region (e.g. Bruce, Grey, Wellington, etc.) but seeding is ongoing in Nipissing, Temiskaming and Cochrane Districts. Canola will tolerate frost well until it has 2 or 3 true leaves, so most of the crop will escape injury from the current cold conditions.

Some annual weeds are emerging but growth remains slow because of cold conditions. Conditions have also been windy, making it difficult to get out and spray. Check out Sprayers101.com for “Six Tips for Spraying in the Wind”.

OMAFRA’s Weed Specialist, Mike Cowbrough, has been conducting jar tests on mixing herbicide and fertilizer products. He noted that adding glyphosate to the tank first, followed by Elevore or Eragon took a long time to mix. See a short video he posted on YouTube HERE on mixing order and checking product labels for mixing order.

It was noted that producers have been asking about wild carrot control. Comprehensive lists of herbicide options in corn, soybean and wheat can be found in Cowbrough’s Problem Weed Guide for Ontario Crops (https://fieldcropnews.com/2017/03/problem-weed-guide/).

This helpful article, Herbicide Injury in Soybeans, was also mentioned on the call. It contains numerous herbicide injury related scenarios that are common mishaps or were demonstrations conducted based on questions from producers.