Weather:    Warmer conditions starting late last week have fast-tracked crop growth. Tracking growing degree day (GDD) accumulation – Base 0 – for April and May in Huron county revealed 159 GGD in April and 244 GDD from May 1-25. Rainfall during the past week was sporadic with isolated thunderstorms resulting in flooded fields in one location and no rainfall less than a km away. Gentle rains forecast for the weekend did not materialize in most locations.

Soil Conditions:     Planting corn is all but completed and most corn planted before May 7 has emerged. Soybean planting in the mid-west region is about 90% complete with a lot of planting activity since the weekend. Some April planted beans have emerged and are at unifoliate stage.
Crusting is an issue on clay and fine-textured soils. Forecast showers did not materialize to alleviate that pressure. There was discussion around the tightness of soil – 3” of rain in the south really made the soil firm up. Water displaced all the air and the corn, especially fields planted between May 4-7 are really struggling. In some fields the best corn is coming through worm holes and is just sitting there. Growers are running with rotary hoes, but many are convinced that they are not doing much to break the crust. Many fields are still wet in some areas. Marty Vermey, with the Grain Farmers of Ontario, noted that crust busting with vertical tillage implements is being done but with some farmers having to make two passes. Using a no-till drill or going through with corn planter over the same row is often more effective to break crust.
There was some discussion about the overall condition of the soil at planting and whether or not the conditions were fit. Many argue the conditions were good but things have really changed over the last 6 weeks. The general consensus on May 20th was that soil conditions had never been better, but now many wondering if the ground was still wet beneath the worked area and moisture wicked up. Even digging to find plants is difficult in tight soils.
Wireworm is showing up in some fields this year. Some field assessments documented up to 30% stand loss. The problem is worse in no-till /high residue and sandy situations. Stand loss from cold shock is minor compared to wireworm damage.

Corn:     Corn planting is all but complete. With warmer temperatures corn is emerging quickly with many fields at 2 leaf stage. Variable emergence due to crusting and insect feeding will result in some replants. The impact of early planted corn and cold temperatures was discussed. One participant monitoring three April 6 planted sites observed that corn planted on April 6 in St Thomas (silty clay), Woodstock (loam) and St Mary’s (clay loam) are all struggling to emerge. The Woodstock field was planted at more shallow depth and has variable emergence with some of the field is at 2 leaf stage while other corn has not yet emerged. The best population in that field is 18,000 plants/acre and many seeds never germinated – they have imbibed but have not yet gone mushy. The field in St. Mary’s will not likely be replanted but the stand count is 24,000 plants/acre where 35,000 plants/acre were seeded. 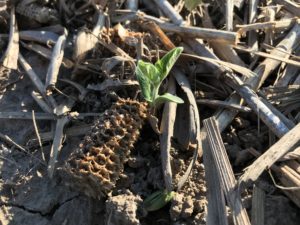 Heavy corn residue can result in uneven emergence of soybeans

Soybeans:     Soybean planting is up to 90% complete in areas where soil conditions are fit to 20% planted in areas with fine-textured soils or significant rainfall. Beans planted on the weekend already have 3/4” root developed.
Discussion about impact of cold temperatures on early planted soybeans confirmed that soybeans should be planted at 1 ½ inch depth when soil conditions are fit. Horst Bohner’s planting date/planting depth study revealed that where beans were planted at an inch depth on April 22 into good soil conditions, the beans have emerged in the past few days and the stand looks normal. When beans were planted at 1 ½ inch depth, not as many are up yet but the stand looks good. When soybeans were seeded deeper than 1 ½ inch the emergence is poor, and plants are struggling to emerge. Deeper planted plots are even worse. Horst’s observation from 10+ years of trials: 1 ½” is the right depth to plant soybeans the vast majority of time as long as they are into moisture. Planted at depth into moisture, even if soil dries out on the surface, plants will emerge. Shallow planting into dry soils will result in seeds just sitting in dry soil. Planting deeper than 1 ½ inch is only required when soil conditions are very dry. “If you go too deep (e.g. >2”) you may never see those beans again!” Later in the spring as moisture is deeper in the soil profile planting deeper than 1.5” may be necessary to find moisture but since the soil is warm beans will have a lot more push.
IP soybeans are about 90% planted. There has been little planting progress to the south. Some last-minute additions or shifts from corn to IPs with total acres steady to slightly up.

Dry beans:     Edible bean planting started on the weekend into good conditions. Azukis are more than half in while other edibles are about 20%. Some growers are waiting another week because nighttime temperatures are forecast to dip down to 3oC on the weekend. Usually planting happens between June 1 – June 15th and the work that Chris Gillard (University of Guelph, Ridgetown) did shows no advantage to planting prior to June 1st. It is important to plant into moisture and with no forecast of pounding rains. Global demand for edible bean types is strong. Acreage is capped by availability of seed supply. Seed is being released as fast as it can be bagged.

Cereals:     Cereal rye is starting to come off for forage and yields have been good so far. Triticale and winter barley are also starting to head out. Spring cereals are at the 3-leaf stage with nice uniform stands. Critical weed free period is up to the 3-leaf stage so herbicide applications should be made as soon as possible.
Winter wheat fields have advanced to September planted fields at ¾ flag leaf. At growth stage GS 37 and higher the window has closed for herbicide application. Perfect timing for T2. October planted wheat is at about GS 33-34 or 3rd node. There was some discussion about the difference between GS 33 and GS 37 (flag leaf emerged) and that they are really the same.
In some fields the second application of nitrogen still needs to be applied. Where 50 to 90 lbs/ac has already been applied, deficiencies are becoming evident. Application of 28% can still be streamed on but should be applied in the evening onto dry leaves. Don’t apply N in the heat of the day. Flag leaf could be exposed enough that any burn would impact yield.
Sulphur, manganese, boron and magnesium deficiencies have been reported. Fields that did not have starter P and have manganese deficiency were more susceptible to cooler temps and are looking a little tougher. High nitrogen induces sulphur deficiency. For sulphur deficiency, often 10 lbs of sulphur is adequate, however if ammonium thiosulphate (ATS) is applied, half of the sulphur is in elemental form, which will not become available to correct the deficiency in the current crop. Boron tests often report deficiency on wheat but numerous rate trials have not shown response to boron.
To date disease levels remain low. Low levels of powdery mildew, Septoria and tan spot are being reported, mostly in the lower canopy. Warmer temperatures (over 25oC) should help keep disease low but as temperatures cool disease could move up the canopy quickly, especially where there is lots of moisture in the canopy.  Stripe rust has been found in Michigan.  Scouting is important – be on the lookout. If fields are one week away from T3 application with a moderately resistant or resistant variety to stripe rust, application can wait until the T3 application. Where a susceptible variety is being grown, spraying for stripe rust control and then come back with T3 application may be warranted. For more details on managing for stripe rust: https://fieldcropnews.com/2017/12/effectively-managing-stripe-rust/
Frost-seeded red clover suddenly appeared in fields, but in some fields it only appears in the wheat rows but missing between the rows. Clover can tolerate frost up to the 1st trifoliate. Considering how little damage occurred in alfalfa, don’t think that the cold temperatures would have taken out clover. There was some discussion about the possibility of earthworms or slugs feeding on the seedlings.

Insects:     Is anyone seeing cereal leaf beetle activity? Cereal leaf beetle survey link for those out scouting: https://fieldcropnews.com/2020/05/ontario-cereal-leaf-beetle-survey/ This will help us validate prediction models from AAFC.

Forages:    Minimal alfalfa damage from cold conditions but growth is slow. Italian rye and orchard grass have headed.  New seedings look good but are only just starting to push first trifoliate. There are not a lot of issues to report.

Canola:    Most spring canola is in the ground. Emergence might not have been great because it was dry in the shallow seed bed.

Weed Control:     A lot of pre-emerge herbicides were applied so far this spring and for the most part there has been enough moisture for activation. However, with sudden onset of heat, quickly emerging crops will rely on post emerge herbicides. When applying in the post emergence window it is better to follow the stage of weeds rather than the crop. Don’t wait until 1st trifoliate stage if weeds are at the ideal stage for control.
As beans quickly poke out of the ground some growers are finding themselves with beans up before they could apply a pre-emergence herbicide. So if someone has beans cracking through the ground can they still apply PRE herbicides, like Tavium (s-metolachlor + dicamba). Each scenario must be evaluated on a risk vs reward basis and will be dependent on the herbicide in question and the weeds present in the field. Using the Tavium example, this herbicide is labelled only as a pre-emergent application in Canada since this is the best window to maximize weed control and mitigate risks associated with off-target drift. However, the U.S label allows for early post emergence applications. So although only the pre-emergence timing is recommended in Canada, if a farmer had applied this product to a field, unaware that the beans had already cracked through the ground, although the application may increase the risk of observing crop injury, yield would not be negatively affected.
With the temperature shift from extremely cold to extremely hot there were some concerns about spraying cereals. With rapidly growing wheat and weed pressure lower than most years, the risk for crop injury should be high weighed against the amount of potential benefit from applying the herbicide. Consensus was that getting the job done was important but concerns could be alleviated by examining product labels for comments about application and fluctuating temperatures.  However, with respect to corn herbicides, some products specifically warn against applying during hot and/or large fluctuations in air temperatures. For example, the Engarde label (rimsulfuron/mesotrione) does not recommend applying when temperatures exceed 28°C and states “A rapid fluctuation in temperature (greater than 20°C difference within 24-36 hours) will stress the corn crop. For maximum crop safety, allow 24 hours for the corn to acclimatize before spraying”

Nitrogen from Manure:
Cool weather conditions in April and early May have slowed the release of nitrogen from manure (similar to N release in 2019). N release is estimated to be only half to three-quarters of predicted. Manure types with low C:N ratio such as hog manure or anerobic digestate will release have a higher proportion of nitrogen available.

Next week is the Ridgetown/Simcoe Breakfast meeting – June 2 at 8 am
Note: Outdoor Farm Show is cancelled for this fall, moving to an on-line format
Also Manure Expo at Listowel is postponed to August 25-26, 2021